This is in direct sunlight. (clear sky)

That’s expected. Recording with NVidia Shadowplay (and nearly all other recording software) compress the picture so little details will disappear and image look more smooth, less sharp. The more you will raise the encoding ratio, the more you will retrieve the grainy problem.

I think you have 2 factors here ; first one is a recent patch of the simm which changed the TAA and sharpen too much image at “low” resolution (1080p or 1440p). Search on this forum and you’ll find several thread speaking about this. I have this problem on my LCD TV (old fullHD Samsung from 2007) due to the patch.

But that don’t explain that much grainy, so I think you also have a problem with the monitor. Do you have a sharpen slider for your monitor or a contrast one you can play with to smooth the image? or did you touch the NVidia control panel setting, the Color tab? You can try here to smooth your picture…

If I raise Render Scaling from 100 to 200, I get some grain (mostly too sharp). Those pictures above that I posted were at 100 Render Scaling and TAA).

This is done at 200 Render Scaling (can see grain) - more noticeable when flying (terrain). Plus this website compresses too much to get a good result of the image. 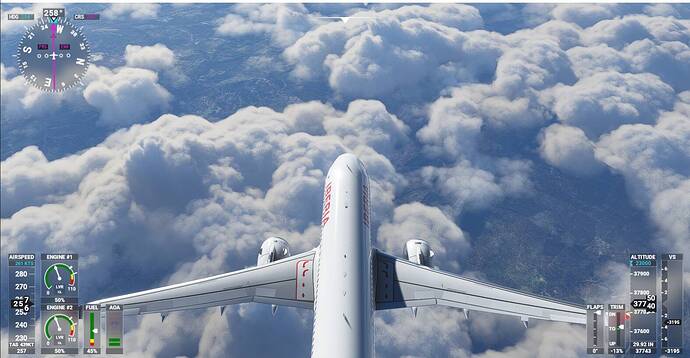 My game went from stellar to really quite an eye sore after the past two patches.

Everything is on high or ultra. LOD 200. 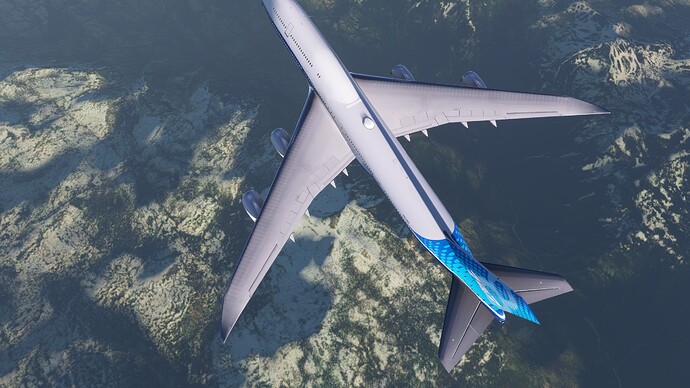 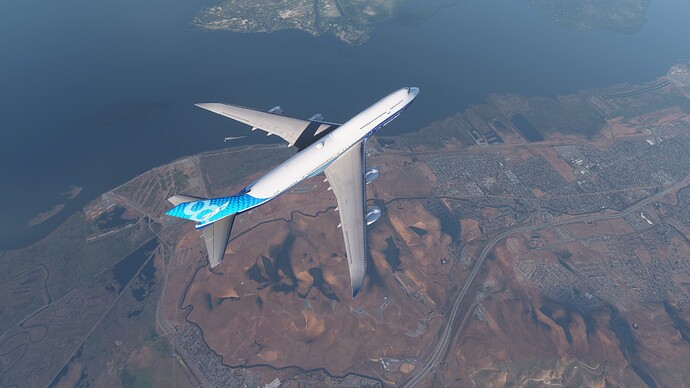 Low res textures and messed up LOD are a totally different thing than the topic of this thread. You’re not wrong with your observation. Just not related to the topic here.

@FlyZRG If your problem is just on the panels textures make sure “Texture Synthesis” is on Ultra.

You can fix the grainy shadows and textures yourself. At least revert them to the way they were at launch, where you’ll only occasionally get a small amount of grain along the edges of dark clouds under certain lighting conditions vs this grainy mess we’re seeing everywhere now. At launch, the small grainy edges in clouds was acceptable to me. Or at least a giant improvement over what’s there now.

The grain issue is a combination of film grain effect, and then excessive sharpening applied over top of it. Those settings are not exposed to us in the in-game menus, but can be disabled from the config file.

Open the file below in Notepad (back it up first just in case)
<yourWindowsProfileFolder>\AppData\Roaming\Microsoft Flight Simulator\UserCfg.opt

Set both Film Grain and Sharpening values to 0, and then boot the game. Grain will be gone.

The end result is an overall image that’s a touch less sharp, but you can bump up render scale about 10-20 and it regains its sharpness. The performance tradeoff for increased render scale vs turning off those other 2 effects is about the same. Not really noticeable to me at least at 3440 x 1440. If you’re running at 4K with 100 scale rendering, that might cause a performance hit.

This helped a lot, though it’s not quite perfect. I can still notice graininess on some cockpit textures and clouds, but it’s much less noticeable.

Yeah, it’s not perfect. I’m not seeing the grainy effect in my cockpit anymore, nor am I seeing that effect on the ground or buildings and such. Just a light touch on the edges of dark clouds. Different hardware, settings and resolutions could yield different results for different people.

In any case, I find it’s WAY better than before. Not perfect, but much closer to what we say prior to the last 2 patches.

FYI I installed through the Microsoft Store and the UserCfg.opt file was located under
%AppData%\Local\Packages\Microsoft.FlightSimulator_8wekyb3d8bbwe\LocalCache

I have the same card as you. Had the same issue. I turned off image sharpening in the Nvidia settings. Fixed the issue. I strongly suggest using this post as a starting point for 2070 super cards. My 2070 SUPER 4K settings and suggestions - episode 2

Good to know. I have the Steam version so I could only speak for that. Thanks for adding that extra info in…

Thanks for the tip, I will surely try this out! Btw, why would anyone apply film grain effect to the image?

why would anyone apply film grain effect to the image?

Beats me. Probably the same people who think motion blur is a good idea. I hate it and whenever it’s an option, I will always disable it. Why it’s forced into the game through a non user accessible manner like this is beyond me.

Just curious, what sort of FPS are you getting in the cockpit with LOD radious at 200?