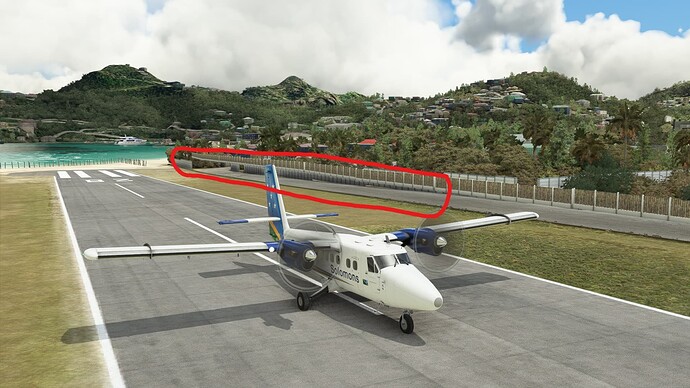 I’m wondering if you might have some 3rd party scenery, or other add-on, installed as you appear to have a road which I don’t have and you are missing the brick/rock wall below the fence, which I do have. 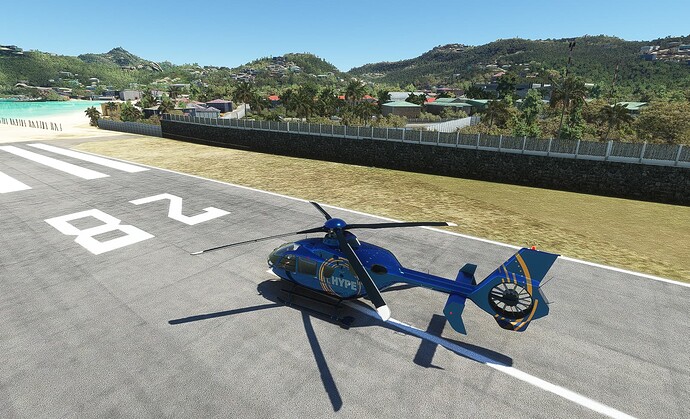 Only fbw 320 and twin otter. Nothing related with sceneries.
Looking at your image, it seems that it’s not a bad placement with the terrain (floating), but that it hasn’t loaded that part of the wall. I don’t know why.

I’m at a bit of a loss to explain this, maybe clear your rolling cache if you are using it and perhaps try the repair option for Flight Simulator, but I don’t really hold out much hope for either of those.

The road on the airport side of your fence seems like it’s probably linked to this but where it has come from is a mystery if your community folder is empty.

Delete Content.xml and let the sim rebuild it. Just removing mods isn’t enough at times. Sometimes their entries in Content.xml remain behind.

Nothing, That not worked to me.

There are any log when you load a scenery? 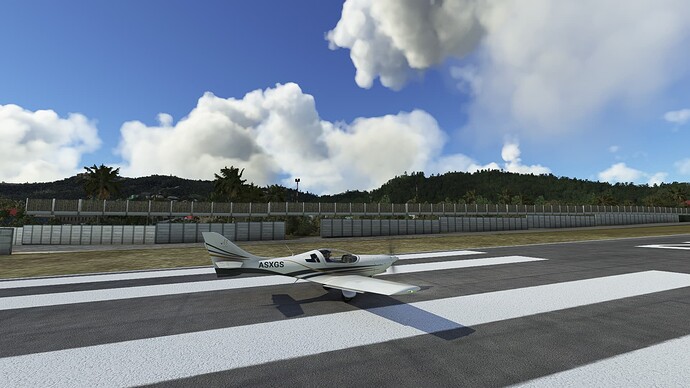 In the end almost sure I was missing that object, for an unknown reason, since as I said I don’t have scenery mods, I found this post for the installation to add back missing files.

[FIXED ON LIVE 1.19.8.0] You are missing packages that are essential to run Microsoft Flight Simulator. Please update the application and try again Install, Performance & Graphics

ISSUE SOLVED OK, Found an even better fix now. May result in lost saved data though, so keep that in mind. For me my logbook etc remains intact, I have just had to reset some settings to my previous values. Navigate to the below folder C:\Users\YOURUSERNAME\AppData\Local\Packages\Microsoft.FlightSimulator_8wekyb3d8bbwe\SystemAppData\wgs Inside this folder are 2 folders, one called t, and the other has a long string of letters/numbers. Open this folder. In this folder are several more fold…

I lost all the configuration and in the end it turned out it wasn’t my fault, but someone at Asobo came up with the brilliant idea to use an asset from another airport which I didn’t have installed (if I want to save disk space, I don’t plan to fly there, and they give me the option to install airports individually, why wouldn’t I use that option).

uh not really on steam…a verify causes a compete reinstall of the sim.

wow, same problem then, I thought it was like in other games, where you have your settings folder in documents or somewhere else safe.

Word of warning for Steam users. If you verify the integrity of your install to fix one scenery bug you’ll end up re-installing the whole sim.

MSFS is updated in two halves. The main binary, and some support files, and the sim proper, or it’s data.

For MS Store users the first part is what is downloaded from the MS Store, and updated via the XBox app.

Steam is the equivalent here. All Steam downloads is the launcher.

If you verify in Steam it will see all that additional content, and wipe it!

At least it used to do this. I don’t use the Steam version, but I wonder if a custom Install avoids this i.e. installing the sim outside the Steam folder?

I opened a issue here https://forums.flightsimulator.com/t/tffj-objects-dependent-on-another-airport/507563