Hand Tracking, it is a beginning 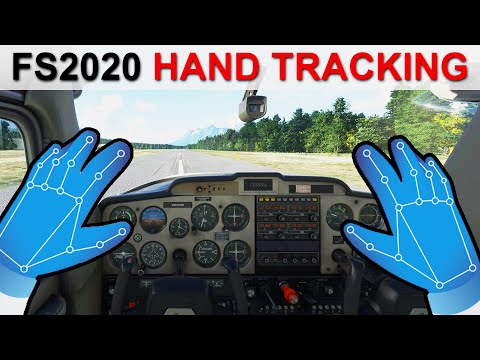 I have used it in other flight simulators and Leap Motion is sooooooo much better than using hand controllers.

Well, I gave up on LM a long time ago - tried it with FlyInside FSX and P3D but the main issue was reaching controls that were effectively blocked by my HOTAS, yoke or desk etc.

I actually prefer the DCS implementation most - and it seems that may, in part at least, be what they will do with FS (gaze control I think it’s called) - though without being able to do the left/right clicking and mousewheel.

In DCS I have those all assigned to a hat switch and rotary encoder on the throttle and it works a treat.

I may give LM another try though - it fits easily into my Index headset, so no biggie to try.

I feel this unofficial feature will get better and better the more Asobo keeps working on the VR controller interaction. Especially the yoke handling needs a completely different approach, less sensitive and more accurate, including an ergonomic mode just like xp11.

But hey, turning the knobs, pushing buttons and moving the handles works already pretty well. And somehow, it does add something extra to the VR immersion by handling the cockpit interaction with hands instead of a mouse, in my opinion.

One day maybe we will see an official support for Leap Motion. Who knows…

My issue, as I briefly outlined - is that as long as you need access to a keyboard and mouse in addition to any controllers, there is likely to be something solid in the way when you try to reach some of the panel switches and so-on. Until we have no requirement at all for reaching a keyboard and/or mouse, it isn’t possible to simply sit in my VR space and fly a la VTOL VR.

edit: Just like to point out that what sweviver is demonstrating in the video is not what I would call “hand tracking”. It’s using your hands as, and instead of, a controller - literally. Hand tracking in my definition - and I think many if not most others - would be reaching out and directly operating switches etc with your fingers. His video title is misleading. 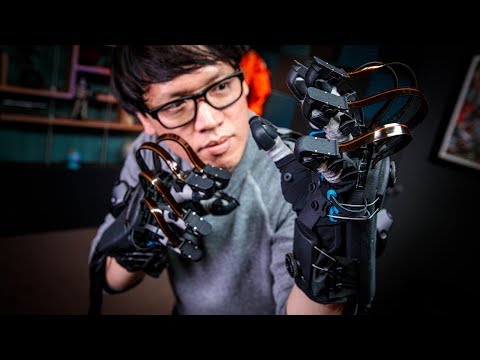 not what I would call “hand tracking”. It’s using your hands as, and instead of, a controlle

Indeed. Hand tracking has so much potential, even outside of VR and I would like to see it developed properly.

I might be waiting a long time for it from MSAsobo though, but I like what I’ve seen with its integration in TinkerPilot.

And I much prefer this instead of VR controller interaction.

Using a Yoke and throttles, its just a mess trying to pickup a controller every time to turn a knob or push a button. And then put the controller down again down. Especially Valve Index controllers which arent really easy to just put on.

Thats the beauty of hand tracking. Keep your left hand on the yoke, right hand on the throttle while performing a final approach, and simply let go the throttle, use that hand to push a button or move down the flaps and then move your hand instantly back to the throttle control.

VR controller interaction is great for fun free flights or simply when demonstrating the power of VR, when you can do all interaction with just 2 controllers, but not in a advanced simulator where there’s so much more that needs to be taken care of, such as ATC, toolbars etc. Especially during ILS landings or IFR.

I’ll definitely give this a try, though - always happy to be surprised by anything VR related that can make a better experience.

Have to remember where I put that LM first, though.

Yeah its worth a try! And dont forget to uninstall the previous Leap Motion drivers and install the new Gemini 5.2 version. Otherwise it wont work.

Oh great - I was just coming back to ask about that! Thanks. I’m using mainly Index with FS2020, but do use Quest 2 occasionally - I’ll stick with the Index for testing Leap Motion, as it’s so much easier.

Didn’t use LM since 2017 so no leftovers to clean up. Just remembered where I’d stored it, so hopefully be able to try it tomorrow (got F1 on today, so…)

I’ve finally had the chance to try this. Wish I was able to fly more…

Anyway, the installation went very smoothly, but there were issues that makes this probably unviable for me for now.

When testing the Leap Motion I noticed a slight latency in the visualizer. That isn’t really a concern for use in FS2020, and I’m pretty sure that was present when I first bought the module in 2016 - so it’s probably something that is unavoidable with current tech.

My Leap Motion is fitted to the Index thus: 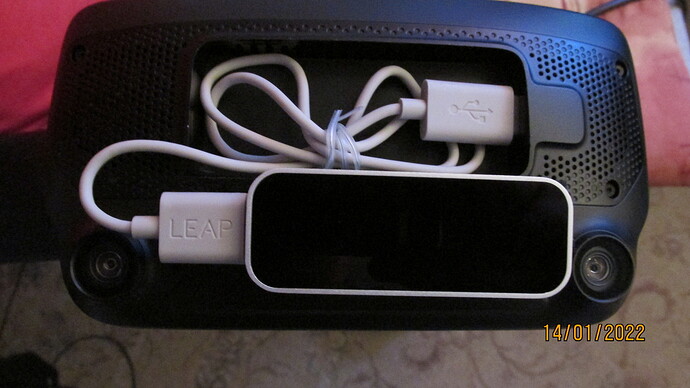 I was quite disappointed as I’d forgotten that you couldn’t just plug it in like a memory stick - so I used some velcro to hold it onto the headset like I used to do originally with the Rift CV1. The main issue was ensuring it didn’t interfere with the headset cameras. It is angled slightly downwards.

I was amazed to find that you can use this as a controller immediately in Steam - I started the sim from within the Steam Overlay using my hands - a good start!

Biggest issue was stability. Firstly, even when I’m hold my hands still, the controller image tends to rotate. This is never more apparent than when trying to flick a switch. As soon as I start moving my index finger, the controller image in-sim starts to rotate. Maybe I was actually rotating my hand a little, but if so it would have been marginal, yet the rotation in-sim was exaggerated. It was therefore frustratingly hard to flip a switch - though I did manage it.

The other main thing was the large boxes with the two circles and ‘A’ ‘B’ and ‘SYS’ areas on it. I didn’t see these in @SweViver 's video, so I’m thinking there must be a way to deactivate them.

One good thing was that I was able to adjust the radio frequencies (when I could hold my hand steady enough) without the boxes popping up, that are present in his video. I guess in some ways it may be better to have those - easier to see - but on the other hand I thought it was more immersive to just watch the digits change on the radio display.

Another annoying thing was not being able to take a screenshot with the Steam controller, which is how I usually do it.

In a way, the state of things now doesn’t seem any different to how it was 5 years ago - loadsa potential, but not really moving forward noticably. I used it with FlyInside FSX and P3D and ended up leaving it due to frustration about similar issues as in this version.

It seems this gear is continually “gonna be great in a year or two”, without actually significantly improving.

Having said that, I do like the way you can use the controller laser mode to change things - with FlyInside you actually had to move your finger to the control - which was better, but I always found my controllers or desk etc were in the way and so I couldn’t reach the cockpit controls - and I don’t like holding the yoke/stick in the sim virtually - I much prefer using my own hardware - so sitting in the middle of my VR space is not really an option.

I will try again, but can’t see me adopting this in its current state. But you never know - maybe once the Quest hand tracking improves that may be an option. Only time will tell.

Just like to add a couple of things for anyone else who is considering this.

The Leap Motion applies itself in all SteamVR games and apps, which can basically ruin the experience with them.
You have to go into SteamVR settings/ add-ons and deselect Leap Motion, then restart SteamVR. Of course, you need to switch it back on when you want to use it in FS again (and it seems DCS World is also using it in v2.7).

Another point is that once installed it starts with Windows and I’ve not been able to find a setting to stop it from doing so - which means remembering to go into the system tray and switch it off there.

You might be interested in this other topic (the beginning is the same but if you scroll down we are then talking about my OpenXR hand tracking software):

My software is still early stage but I’m hoping to improve it soon.

As soon as I start moving my index finger, the controller image in-sim starts to rotate.

Ha, I think I can help you with that. This is because, as you mentioned, your controller is slightly angled downwards. When I bought mine, I designed a holder that tilts it down about 30 degrees, as I thought this would give it the best range - that’s the cockpit I want to scan. But when I tried it, beta-testing @mbucchia software, the “rotating” issue became very apparent, even in visualizer. The whole geometry is completely wacked when you tilt the controller. It has to be mounted perfectly vertical on HMD (90 degrees to your line of vision), or horizontal on the table, in table more. There is still a slight distortion towards the edges, but nothing like a super-weird rotation you get at an angle. Leap Motion controller is basically an IR camera with a wide-angle lens, with the lens distortion and everything that comes with it. The software tries to compensate, but I guess it assumes the specific position. If you angle it - you get non-linear distortions that the software doesn’t know how to compensate. It would be nice to have an “angle” parameter in the Ultraleap software, because in theory software could compensate for that, but there isn’t one.

Okay, thanks, I’ll try to get it more perpendicular to the horizontal.

I seem to remember from my first tests with it some years ago, that it can be mounted on the desk or under the monitor - I don’t know if that is the case in this application (with FS2020) but I will give that a try if my memory is correct. I might be thinking of the Tobii EyeX, which I also had for a while.

Yes, there are 2 modes - desktop, and HMD mounted. You set it up in the Visualizer - only works in HMD mode if it’s HMD-mounted. Also there is reverse settings - so just make sure it works in the Visualizer. You can also do desktop, but I think it’s impractical for VR. You would need to keep your hands above the table.

I’ve mounted it on the top frame of my monitor - I’ll see if and how well that works. I checked on the LM website and it seems this should be okay.

With mounting it on monitor instead of headset - your hands will become disjointed from your head and body.
I.e. if you keep your hands in place but rotate your head, because LM does not know about your head and where you are looking, it will not adjust hand relative position, and you will see hands moving together with your head rotation.

(though I did not try it)