who are the official retailers in europe?

Aerosoft and Flightsim store with some ‘available from Amazon’

It’s a basic fact of aerodynamics. Forces acting on the control surfaces are squared in relation to the velocity of the air flowing over them. This means that if the speed of the air flowing over the control surfaces is halved, control authority decreases by a factor of 4. If the speed of the airflow doubles, control authority is increased by a factor of 4. This also means that the size of the control surface in question has an effect here. The larger the elevator, the more effective it is. Also, fly-by-wire systems can compensate for this, but I assume you’re not in a FBW aircraft at 500 hours.

Just so you know, Honeycomb does not care one iota about this concern and about people getting ripped off to buy their products. They literally blame you for the fact that you’re getting robbed.

Right … and consequently, as you flare, the yoke need more travel – not more force. As in pulling the yoke all the way back, but that’s not a matter of requiring more force; as you stated the dynamic pressure on the elevator has decreased, requiring more TRAVEL to maintain authority. So the pressure is light but travel at stall is max, to get the yoke “in your lap.”

So when I ordered two Bravo Throttles (one for me and one for my son) from their website, the very minute that they became available for pre-order, and the very next day I received a cancellation and refund for one of the two and the reason given was because there was a limit of one per order (even though there was nothing posted about this at the time)… this was because “they do not care one iota” about scalpers? No. I believe that this was because within 30 minutes of the orders being placed, there were people selling “confirmed orders” that obviously hadn’t even shipped yet, on eBay for $750, and that this was at least one way to curb the scalping.

For the record, I have received my one Bravo Throttle and my son and I are sharing it, until the ruckus dies down and they are reasonably available again. The product is well built and worth its price. The default profile that Asobo included in the last update however, is a subject that deserves its own thread. Ah, wait… there is one! … or two.

I think these are the ones I should unmap? Not sure how to unmap, usually I just bind to a different key?

OP said more “back pressure”, not “back force”. I don’t know where we’ve gotten confused on that.

I think these are the ones I should unmap? Not sure how to unmap, usually I just bind to a different key?

Yes those are the ones. You just click into the field, hit the backspace key to erase what’s there and leave it blank. Or you could remap to keyboard keys if you prefer, but since you only really use them at start/end of flight you can just use the mouse.

A question to those who already have the throttle quadrant. Are there airbus-style detents?

Sorry Rev but I’m having a dunce day here, when I click on the field this box comes up. I don’t get how the bckspace works 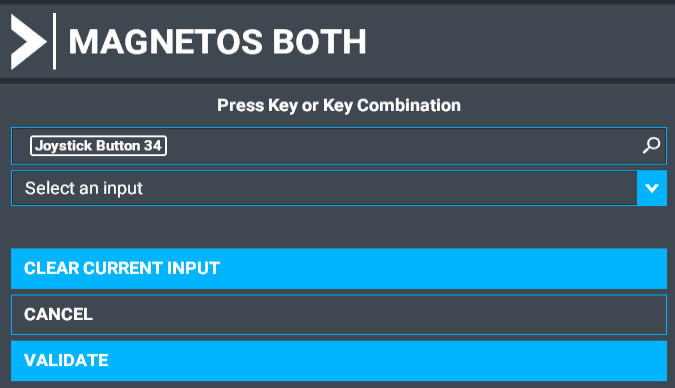 Sorry Rev but I’m having a dunce day here, when I click on the field this box comes up. I don’t get how the bckspace works

No problem, you can actually click “Clear Current Input” then Validate. Sometimes it’s glitchy and you have to do it more than once for it to stick.

Nope, no detents.
I bigger disappointment for detents is their are none for the commercial flap lever.

Pre ordered Bravo throttle back in September.
Received an email from the supplier two days ago advising that they expect to ship to me in mid January. That’s after being told late November then late December.
Not my suppliers fault but, boy wants to be worth the wait.
I have the Alpha yoke and am seriously pleased with it.

You’ll like the Bravo… once you get it dialed in.
Love mine.

Received today one Honeycomb Alpha Yoke. Color me Impressed! I had visions of nasty plastic grips but Hell No! Happy to say first flight was not to bad a landing considering I have been using keyboard for some time.

Now if I could only get a hold of the Bravo

And FFS hurry up with Charlie !!! Foot Pedals Yeah!?

Thanks, I cleared all of them. If they ever fix it I hope to get them back operational. Really tired of half the stuff not working.

I can only agree. I bought mine in June and I‘ve never regretted the purchase. Now I‘m looking forward to the Bravo. But since it probably won‘t arrive before April and I sometimes have the patience of a child I ordered the Thrustmaster throttle quadrant to bridge the time😅 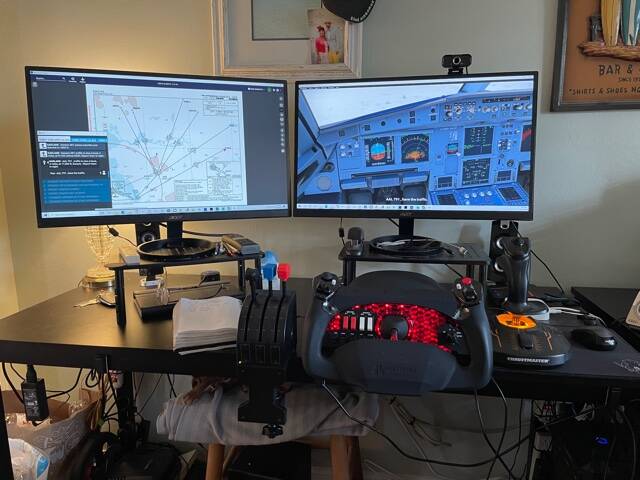 My setup liking it so far