Dear participants of the MSFS2020 forum!
As you know, ReShade cannot be installed on MS Store version of the MSFS2020 using standard methods, because access to the “FlightSimulator.exe” file is blocked. The reason is the “UWP” platform. If I understand correctly, one of the properties of the platform is blocking access to the game’s executable files. However, there is a program called “ReshadeForUWP”. Its author is “MilkyDeveloper”. It is specially designed to solve the problem. The program placed on GitHub website. The work of the program doesn’t violate the law, since it doen’t break protection of the “UWP” platform. If I understand correctly, the principle of the program’s work is that it finds out the exact name of the game’s system process, and then connects the ReShade injector to the process at the moment of its launch. The program creates a special bat file to perform this task. (Also, the program doesn’t change the system files of the MSFS2020.)

Here is a link to the MilkyDeveloper’s guide about the program. 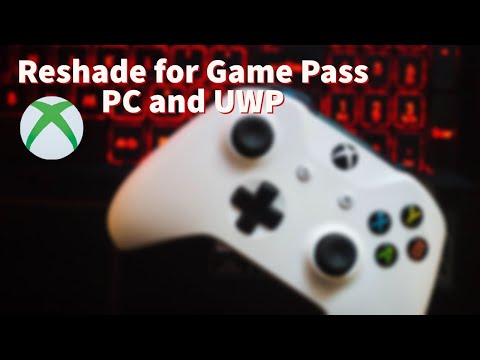 Please don’t rush to perform all the actions as described in the guide! It is not that simple. I tried to perform all the actions specified in the guide exactly. Unfortunately, the ReShade appeared on the MSFS2020 only once. It disappeared in further runs of the simulator. According to the author, It doesn’t work well with MSFS2020. But, I didn’t want to give up. I carried out a number of my own experiments with the program, then I came to conclusion that it can work correctly with the simulator if the above guide is slightly modified. In particular, there are actions that need to be performed with administrator rights.

So, let me introduce you the MilkyDeveloper’s guide slightly modified by me. This sequence of actions actually worked in my case.

The job is done. Now the Reshade should appear in the simulator.

(Perhaps it would be more logical if the 9th and 10th steps were skipped. But I was afraid that further experiments with the sequence of actions might be less effective. So I decided to leave it as it is.)

This method allowed me to successfully installed ReShade on MS Store version of the MSFS2020 in my case. I also recommended this method to several other users of the MSFS2020. It worked good among four of them. But in one case it didn’t work. So I concluded that the method doesn’t always work. However, the chances of its successful work are quite high, in my opinion.

Perhaps there is another method, another sequence of actions, but I haven’t tried it. Also, there are other videos about the issue on the MilkyDeveloper’s Youtube channel, but I didn’t study it because I stopped at the method that really worked for me.

The root directory of ReShade will not be located in folder:
“C:\Users\Username\ReshadeInjectUWP”.
Presets for ReShade will need to be placed in the same folder.

if you need to update the MSFS2020, you don’t need to change or delete anything. Just start the simulator from a regular shortcut without administrator rights and install all updates as usual. (ReShade will temporarily disappear during this time.) Then, restart your computer and run the simulator from the “bat” file as administrator. ReShade will reappear and can be called up with the “Home” key, as usual. I have already installed many sim updates this way. Everything works and no glitches, for now.

I hope this information will be useful for you and you will install the ReShade successfully. Please post the results to this thread, if you are interested in this issue.

8 Likes
Reasons for using ReShade, attempt to use its shaders instead of some MSFS2020 effects
Tip for Nvidia Users- Check your 3D settings
KamperKilla87 July 26, 2021, 6:24am #2

Hey I followed your guide step by step but it’s still not working. Any ideas?

Please describe the situation in detail if my guide doesn’t work in your case. It will be better if you attach screenshots. In turn I show my screenshots below to prove that the guide really works in my case. I turned on developer mode in the MSFS2020 to prove that the ReShade works on MS Store version of the simulator. I deliberately tweaked ReShade very hard and roughly to make it work clearly visible. So the image on the screenshots is unbalanced and overloaded. 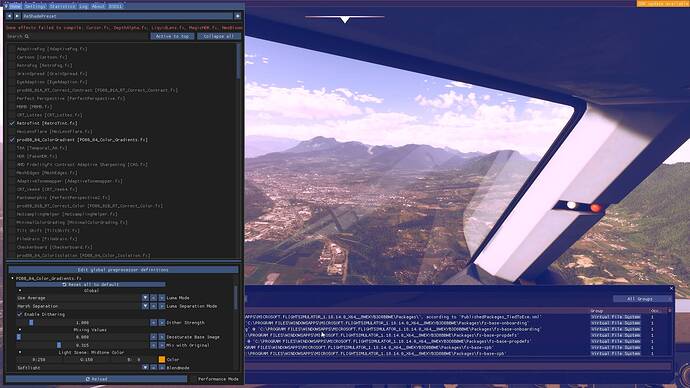 ReShade on MS Store MSFS2020 - 11920×1080 245 KB
Look at the virtual file system directories listed in the “Console” window. (The mouse points to this.) “WindowsApps” directory is clearly there. As far as I know, only MS Store version of the simulator can have this directory. The general directory structure is also typical of MS Store version. 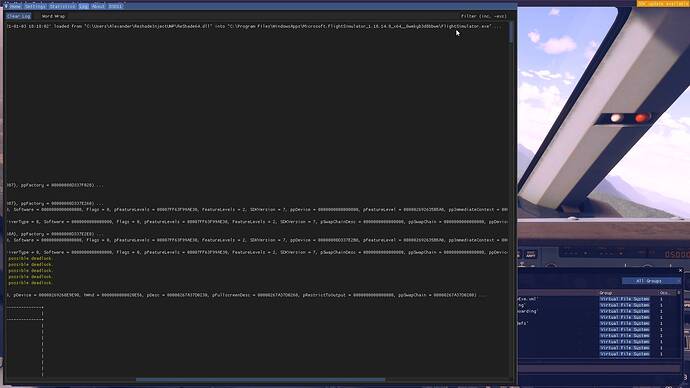 ReShade on MS Store MSFS2020 - 21920×1080 145 KB
Look at the first line of the ReShade log. (The mouse points to the line.) This line shows the path to the executable file of the game to which the ReShade was injected. The type of this path indicated in my second screenshot is only possible on MS Store version of the MSFS2020. There is also another important detail of this screenshot. Please pay attention to the simulator version indicated on the first line of the ReShade log. This version is 1.18.14.0. Therefore, the ReShade works even after Sim Update 5 of the MSFS2020.

As I already said, my guide may not work for some users. Installing ReShade this way is experimental. But this guide works well and stablу for me and for a few other people. I don’t have any glitches or crashes of MSFS2020 and ReShade, except for one problem: I noticed that about 30% of ReShade shaders don’t work in my case. (These shaders are marked in red on my first screenshot). About 10% doesn’t work correctly. However, about 60% of the shaders work well. This 60% is a large number of shaders that can significantly change the graphics of the simulator.

Not so long ago I carried out a number of additional tests of the “ReshadeForUWP” program. As a result I came to the conclusion that it is possible to abandon the 9th and 10th steps of my guide. This will simplify the process of installing ReShade this way. I’m currently working on my video tutorial, which will show the updated guide. This tutorial will also include detailed testing of the ReShade with a report of its log file. I will post the video tutorial here when the work is done. 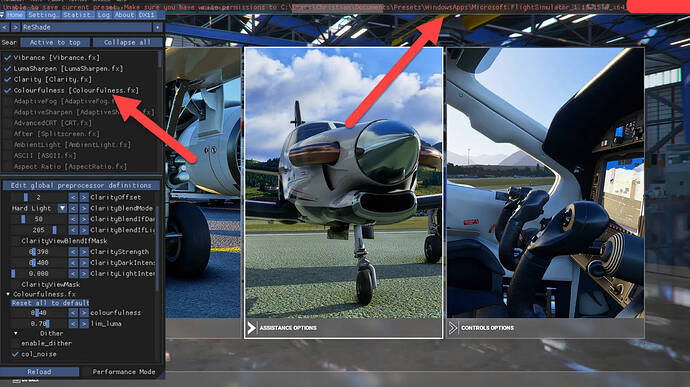 Hi, in the first place, thanks for your work, but I can’t really find where to put other shaders. I need some help here

The instruction for ReshadeForUWP works fine for me. Thanks to AlexVengrus!

im not sure if it has worked after i changed to Win 11 on Saturday… already deleted everything and installed the newest version… the first start of msfs (w/o admin rights) works fine… the second with elevated rights will crash as soon the games loads Rendered Loading Screen and crahs with an error of ntdll.dll

Works fine for me! Thank you!

How did you manage to make it work??

For me just following the AlexVengrus tutorial

I have a problem here. I can’t even start the guide because the UWP reshade app is not even opening for me. I’ve redownloaded the app twice and run as an administrator and normal mode and still no response at all. The only thing I get when I try to open it is a powershell windows for half a second and that’s it. Could someone help me out in here please? Thank you.

I used a different technique than above cause his instructions did not work for me. I have a tutorial on how to. Let me k kw if you want the link. Or search reshade here in the forums and you’ll see my post. 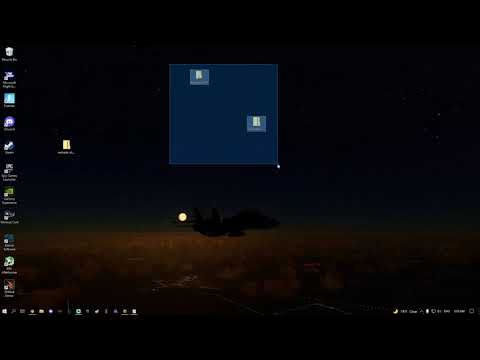 Thank you so much

OMG Finally a working Reshade! I literally tried everything before.

Question. I have a few .fx filters I want to add such as AMD Fidelity FSR downscale resolution sharpen for VR etc.

Where can I access the Reshade folder/shaders folder and INI file?

C:\Users\username\ReshadeInjectUWP usually. Its all in there.

PS: can confirm this works.

I express my gratitude to all participants of the thread for the discussion. I express my special gratitude to “FerrevmVnion” user for useful advice. Now let me show you the video version of my guide to the “ReshadeForUWP” program that I announced earlier in this thread. (Note: my guide is a modification of original MilkyDeveloper’s guide. Read more about this at the beginning of the thread.) 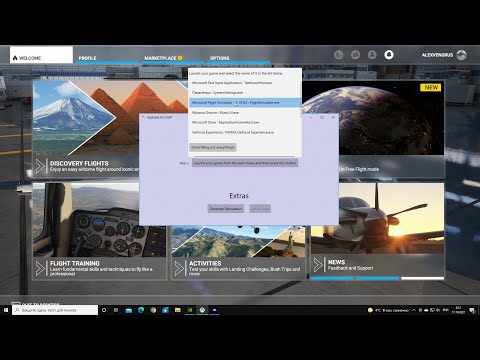 (I fast forward my video to the mark where the installation begins for your convenience. But if you are also interested in other sections of the video, then please use timecodes in description.)

Let me remind you about two key benefits of the “ReshadeForUWP” program.

Not so long ago, a new version of the program was released, which contains a number of improvements. Read more about this on the “ReshadeForUWP” official web page. (Link at the beginning of the thread.)

Is there a way I can also skip the intro videos when launching with the .bat file?