If you install the Stable version of FBW from the marketplace, you need to go to the content manager and manually delete/uninstall from there before you direct install the dev version.

Thanks - I had an older dev version installed directly via their installer, never installed anything in the market place. I guess I will just wait until the FBW figure things out

FBW is best reached via their Discord channel. They only come here occasionally.

I really do not understand how there can be so many different behavours with the same software.

My experience with FBW A32NX and SU5 is as follows:

Everyting else apears to be working properly, and have completed several successful flights when using a SU5 compatible livery, and weather presets to prevent the high altitude temperature problem.

Let´s hope this problems are fixed in time for the next sim update to break everyting again. It is not fun if things just work (sarcasm…).

If you have an older dev version installed, it’s probably a good idea to manually delete them from the Community and the Packages folder as well.

This is to make sure you cleared the mod folders with any garbage files that may or may not cause issues. Then do a fresh installation of the latest version through the installer.

Since the dev version is updated very frequently, sometimes 2-3x per day. It’s always a good habit to start running the FBW installer each time you want to start flying, just to see if there’s any updates, if so, update it first. Otherwise, you can go ahead with flying.

Miracle of miracles, I managed to fly the A320nx (development version, first deleted and then reloaded), from EGKK to LFPO without a single glitch. Yesterday and the day before, I could never have gotten beyond the gate at Gatwick without a CTD. The sim gods must be smiling on me! As noted above, I had already cleaned out my Community Folder and for this flight used only the Easy Jet and Gatwick mods that were , per .to, compatible with Update 5.

So, tested again tonight… It is interesting to read that others manage to fly it and or even load a flight in it while others get a crash to desktop. I tried again tonight, cleared my community folder, cleared the packages folder in local state and also cleared content.xml. Installed the development version through the installer, latest version available today 7pm Central time. Restarted my PC, setup a flight out of KIAH and half way through loading in the sim crashes to desktop. Reboot PC then load it again, this time it loads in but as the camera is moving around the different views before it focuses on your AC the sim crashes to desktop again hadn’t ever seen it crash here before. Perhaps it is settings related to like controls or something. Probably gonna just give it a break for now. Just out of curiosity, does this mod log errors at all? Is there any type of logging going that is recorded anywhere that we can view?

Anyways, hopefully this mod becomes more stable in the future, has always been a treat to do some sim flying in.

Just a quick question, do i have to save config files (i.e. camera settings, etc.) prior deleting the development version via the installer?

Here you can see that it works (nearly) perfect

Here is my (almost) daily check flight around Paderborn EDLP free Scenery von Aerosoft. Recorded on 07/31/2021 after Update5 with hotfix and FBW developer version 5668670. I always do that when a new developer version of the FBW A320neo comes out. This is the best way for me to test what is new and what works and what doesn’t. [MSFS 2020 - FBW A320neo Check Flug EDLP Lippstadt-Paderborn Scenery von Aerosoft] My specs: Mainboard MSI MPG Z490 Gaming Plus CPU Intel i9-10900 at 500…

It’s the simulator that needs to do the logging part, the add-on is just sandboxed code running within the sim

Thanks for uploading. I did also a test flight KSEA - KPDX. For 95% went ok. Couple things what i also see on your test flight. When fully ready on take off, there is a warning in red t.o. Inhibited. I just took of without any problem.

What also experienced is the dashed line on NFD. In the MCDU the flight was configured correctly.

But can be my flaw also.

… there is a warning in red t.o. Inhibited…

Hello,
this is a perfectly normal message.
As far as I know, this just means that there is no space for all messages in the display.
If it were something important, space would be made.

Look here - I still found it. This guy explains that better. 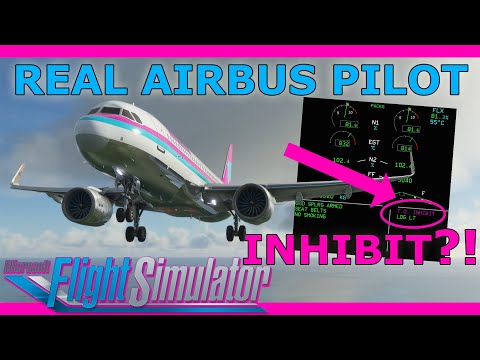 Thanks for your reply! It has never been a question of as if it is truly working for others and not for some. A question as to why this is case.

It’s the simulator that needs to do the logging part, the add-on is just sandboxed code running within the sim

Thanks for that sidnov, that sounds about right wish there was better error logging going on the sim though the FBW has a logging already implemented to a certain degree so surely it could be done to monitor their own sandbox per se, to see faults in code execution?

Anyways, might give it another go later and see if anything comes up in event viewer if in fact it crashes. Hopefully not!

The FDR files that we use to log data on the development version help to record all the flight parameters such as speeds, altitude, engine performance and so on. It does not or rather cannot log code or sim faults.

Let us know how that attempt goes, we do have a stable version that’s coming in a day or two.

Alright, so I’m pretty sure I have found the culprit causing the crashing with the development version on my end and it has to do with a windows update *preview (KB5004331) that is automatically installed.

Last night I had updated to 0.7.0-dev 2021-08-03T21:21:36+00:00 and made two attempts to load the aircraft with no success, resulted in Crash to Desktop when loading the flight. This was with all steps taken to minimize crashing, clean community folder, clean install of FBW, newly rebuilt content.xml and a clean LocalState Packages folder. Still Crashed to Desktop when trying to load.

So, peering into event viewer I noticed two events being listed in event viewer at the time of the Crash to Desktop the first one was an Event ID 1000 Faulting application name: FlightSimulator.exe, version: 0.0.0.0

Following the event 1000 was three Event ID 33 events. These are SideBySide errors showing errors in .Net Framework assemblies. SidebySide can have faults as well, people often think of SidebySide as fool proof which is often not the case. With these three SidebySide events I also noticed in game leading up to the CTD the sound cut in and out three consecutive times before eventually crashing. Another important note that the sim and other add-ons like the heavy 787, Working Title CJ4 and various others ran just fine with this KB5004331 installed. To me that is not necessarily stating its solely an issue with FBW though a combination of the two. It’s always more than one in any relationship, right?

I normally stay away form the updates that are labeled as previews but in this instance I had no choice, it just installed.

So I went into control panel, Programs and Features, View Installed updates and filtered by date and found KB5004331 at the top. Uninstalled it then rebooted the system. Loaded up the sim selected the FBW and also even selected a livery that was listed as update 5 compatible, loaded in with success with the exception it took a little longer than usual with the add-on building the work folder. Got loaded in, calibrated the throttle, got set up for a flight from KLAS to KDEN and it all went without a hitch. Well, with the exception of the live weather bug that seemingly you cannot avoid with even using the latest version of Rex Weather Force.

One other issue that was apparent was that after inserting a flight number in the aircraft selection screen that flight number became my call sign in flight as well even though I was using a livery that has it’s own call sign being that of SpirtWings. Not sure if this is a bug with the Sim, a bug in FBW or a bug in the livery. Anyways, I hope this may help people who are still having CTD’s even though they have taken all steps possible to minimize the occurrence. Now, I am not sure where any newer versions of the FBW stand with this now though I think I’ll leave this KB5004331 uninstalled for the time being. And as always, amazing progress the FBW team is making on the A320! Loving the new textures and those screens are looking beautiful!

Hi there, we released a bugfix (0.6.2.) for the stable version of the FlyByWire Simulations A32NX for Sim Update 5 (MSFS v1.18.14). However, we highly recommend staying with development for the latest features and continued compatibility. Note: Not available on MSFS Marketplace. If you run into any issues with the addon, please do the following before asking for help or opening a bug report: Use legacy cockpit interaction system Read the reported issues page Run the addon without custom li…

Interesting finding on the Preview update… I’m running Windows 11 so my build is more “preview” than everyone else. Hahahah.

About the livery callsign, perhaps it’s a good idea to add the callsign and flight number into the livery aircraft.cfg and leave the one in the main flight customise menu as blank.

Had an initial CTD with the latest development version today. I am using some third-party liveries but decided to keep them installed and just relaunched the sim. After that, no issues. Loaded a flight KSEA-KLAX.

The only thing I’ve seen so far is some issues with the aircraft following the managed speed climb target above 10,000’. Target was 290 but actual aircraft speed would climb above that target, then fall below. This oscillated for several minutes in the climb, at times negating any climb. Things smoothed out and I reach cruise of FL370 in just under 30 minutes. A little longer than expected/normal but the speed issues were a factor. Anyone else seeing this?

Are you on Live Weather mode perhaps? There’s a temperature bug and barometric pressure issue with live weather that can severly underperforms the engine. Until the hotfix comes through, I suggest you fly under Preset weather conditions with static barometric pressure.