Is there a GPS obsession?

Let me nail my colours to the mast straight away, I do not do any GPS flying. I find it boring.
For me there is not enough to do. This is just me. I understand others will get a lot of pleasure out of setting flight plans, and succesfully steering a large plane from A to B. I fully get that.
However it seems to me that there is now a GPS obsession. Yes, I know it is the way real airliners fly these days, but that is to do with safety and fuel saving.
I like to fly a Caravan or such like from VOR beacon to VOR beacon. Now here is my point; please stay with me here:
I use to be able to lookup the approach height of an airport, the localiser frequency and Glideslope.
Flying VOR on NAV1 once I had dropped to the correct approach height (I created a simple utility to calculate where to start my desend and VS) I would see on my instruments that the localiser was picked up and then the glideslope. I would then either engage the AutoPilot and engage a coupled approach and waych my desend speed to stay within the glideslope or indeed do all this manually.
All this became suddenly impossible after a recent update. (Dont know which one but I suspect it was the one that introduced the Garmin update).
What I described above, the way these things were done before this modern fandangled GPS thingy just didnt work anymore. Yet it should. It is using the Plane’s instruments. Following the normal procedure the plane would pickup localiser but then drop it and start wondering all over the place. No matter what I did, things just didnt work, although I assume if I was so minded to install a full flight plan in the Garmin and use GPS then it might probably work.
But I dont want to do that.
In the end the solution to all this was simple: delete the Garmin update from the Content Folder.
Now all is well again and I can fly ‘properly’ using the plane’s instruments as intended.
Is this Garmin update bugged or is VOR flying simply now being ignored?

being ‘ignored’ i doubt, more likely they dont know its an issue yet

at least i know it wasnt me last night, i was using the Beaver, night flying with only radio nav (like you i enjoy this, its exhilarating to actually ‘worry’ about where you are rather than just watching some blip move)

and i can confirm i could not lock on to the ILS system at my destination, even for direction
i thought maybe it was an issue with the specific aircraft since i know it worked some time in the past (ive done this with the classic 172 many times previously)

I never use the GPS or FMC, but i do like flying airliners. Fortunately the JF146 gives me the option to remove the FMC completely and the upcoming F28 looks good for this too. If only JF would bring the VC10 and 1-11 to MSFS I’d be a happy camper.

I chuckle whenever I read this type of thread.

It harkens to the Digital vs. Analog comparison in photography.

As time went on, the ability to practice analog (at least for photography) became more and more a niche, as development labs shuttered, traditional film brands ceased emulsion making, and had to innovate and transform their business to remain relevant.

Suffice it to say that in both cases, it’s not an obsession. It’s simply progression.

The retirement of VORs partly corresponds to the acknowledgement that there are more accurate, less costly and easier ways to navigate. Tie that to the transformation of the cockpit into a more unified view of the traditional six pack into a single PFD, and it’s simply the progression of both technology and techniques to move flying forward safely and effectively.

I tried the ILS at KPNS (Pensacola) My home base and the ILS operation appears ok. The Beaver recognized the correct freq. and displayed the ILS deviations correctly. I wonder if there is a problem at your destination with the ILS ? 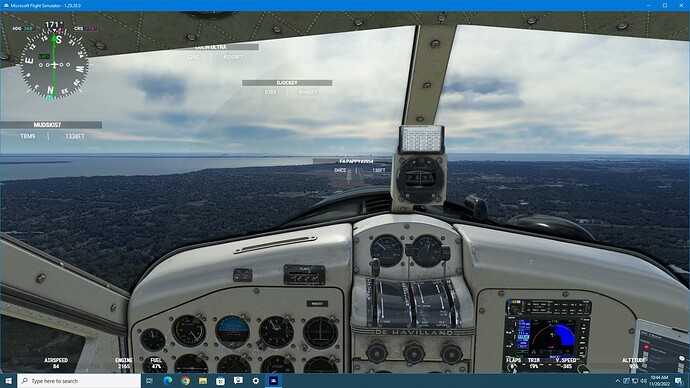 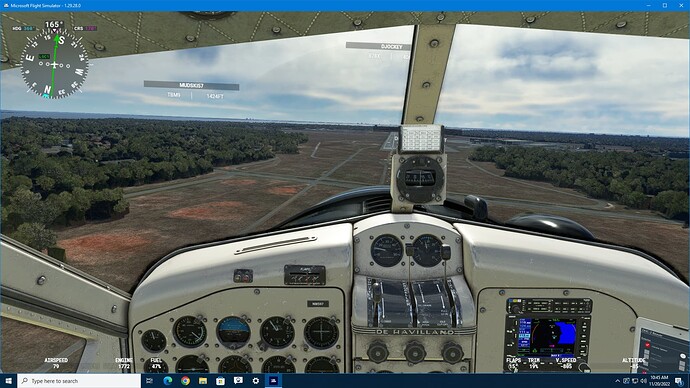 I am not sure you have understood the issue.
It is not about progression, it is about standard basic plane instruments being rendered inoperable by an add-ons update.
Bit like you not being able to drive your car without programming your SatNav .
Whatever happens one should ALWAYS be able to tune in into a localiser and glideslope at an airport and your flying procedures such as flying a couple approach must be possible.
Chuckle away.

Temporary fix, delete the Garmin in the Content folder. Easy enough to reinstall once it is fixed.

We still need to know, use, and practice these things when studying for certificates, regardless of whether or not they are being supplanted by newer technologies. It doesn’t seem proper that something called “Flight simulator” would neglect these very fundamental items. Is there not a reason why these are still part of curricula for private and commercial certs?

Is this Garmin update bugged or is VOR flying simply now being ignored?

I didn’t notice this and I use VOR (and even ADF) on a lot of my flights… Which Garmin update were you using that you disabled to make your issue go away? G1000 NXi? The relatively new GNS430/530 by Working Title? Something else? Was the problem present with any plane or specific ones?

I love analog, I love digital, but I think it’s not the point here… I just find it very important that both modern digital cockpits AND traditional VOR navigation work properly in the sim, it is not a thing of the past just yet, and as long as the feature is available in the simulator, it should work!

Whatever happens one should ALWAYS be able to tune in into a localiser and glideslope at an airport and your flying procedures such as flying a couple approach must be possible.

And I can do that, in both a glass cockpit and an analog cockpit right now. It’s also important to note that if you’re suspecting the Working Title GNS430/530, it’s marked Early Access for a reason. Chuckle.

But you started with a long preamble about GPS and obsession, and only ended with your comment that you suspected an issue with an recently released update. So…

It’s not really a GPS vs VOR issue, GPS flights still end with an ILS when the weather is bad enough. More likely you’ve just found a bug.

The code will eventually be core to the sim just like the NXi (and effectively mandatory) - more importantly, cannot be deleted. If you want to not report it, that’s your call, but that seems like kicking the can down the road. If it’s not fixed now, it’ll have to be fixed later assuming it’s an actual bug…

With respect, your reply seems to be like a critique, sadly.
First of all I believe, unlike others, in making clear how I use the Sim and where I stand so people can judge my posts accordingly, hence the ‘long preamble’ as you put it. ( really in italics??).
Second I do not believe in posting bug reports unless there is some confirmation from users that it IS likely to be a bug.
Thirdly I made it clear I was talking about the Garmin update MS has provided for free via the Market Place. I deleted it now and that has resolved my issue.
Maybe it will help others.
By all means message me if you need more info as you seemed to be somewhat confused about the meaning and purpose of my post.

I’m not at all confused. I’m pointing out there is a legitimate and official thread in the forum for raising questions both general and specific - including potential bug reports - for this Early Access FMS. If you look at that and previous Working Title threads, that’s been a consistent approach. Or if you want real-time access to the Devs, join their Discord. Matt and Team are very responsive, and it only helps to improve the product ahead of the curve if users report potential defects so they can be dispositioned and addressed.

As I stated before, that’s your call to report it or not. But it seems only fair to point out that if this bug is real, and it goes unaddressed, then you’ll encounter it again when the FMS becomes mandatory.

im Not using the gps variant, thats kinda the very issue we are describing, it works with gps equiped aircraft but not without?
idk i will have to do some testing, but when i manually tuned my radios and tried to get it to display on the CDI at Amarillo (KAMA) it didnt seem to work
i think you ‘may’ be bypassing the issue using the gps version?
or it could have been user error on my part, very likely

A lot of aircraft don’t have DME, even if they have VOR/ILS capability, which is a bit annoying if you’re trying to find an airport that doesn’t have a VOR on top of it. Not sure how they dealt with this in the past, especially if weather/clouds obscure any sort of visual reference for dead reckoning.

I like GPS for VFR discovery type flights where I want to just enjoy the scenery.

What’s the issue here… I don’t use VOR, ILS, DME or any of these auto-quirks. I prefer Cessna c19 Bird Dog which does not carry electronics

and sometimes I fly others… before I fly Caravan or C172 after that update (SU10??) I removed the G-1000 from CM. It stays in and sais “install” so when I want to ever use it, I’ll update via CM. I always have LittleNavMap on.

If you can remove things you don’t use, just remove them. Don’t start complaining about what others want.

Thank you for the reply. Maybe I was doing something wrong, not sure. I dialed in the ILS freq manually and selected CDI and the instrument head immediately displayed I was right of course and high. Eventually, I managed to get the Beaver in line with the ILS beacon and finally on glide slope before landing… So from the approach to runway 17 (think that was the correct rw) at KPNS, the CDI seemed correct to me. I’ll try an approach at KAMA and see if it is different for me.
…
Update: Did a quick manual approach to RW 22 at KAMA and dialed in ILS 111.1 and it seemed ok to me. I must be missing something if your CDI is not working with an approach to 22. I included a screen shot. Maybe I misunderstood the issue… Had fun flying the approach though. 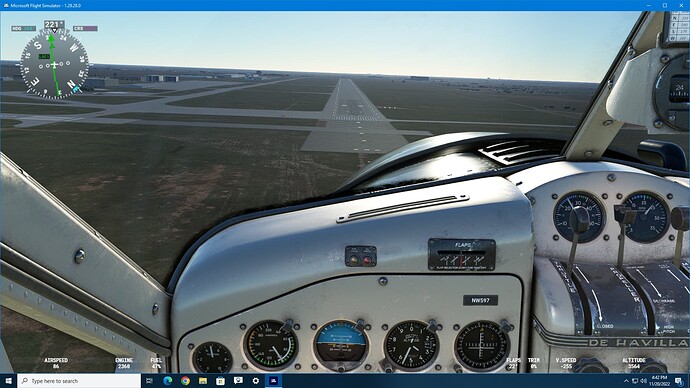 It’s not impossible (though in some instances a DME is required), I’ve done it a number of times on VATSIM before the 152 mod was given a DME.