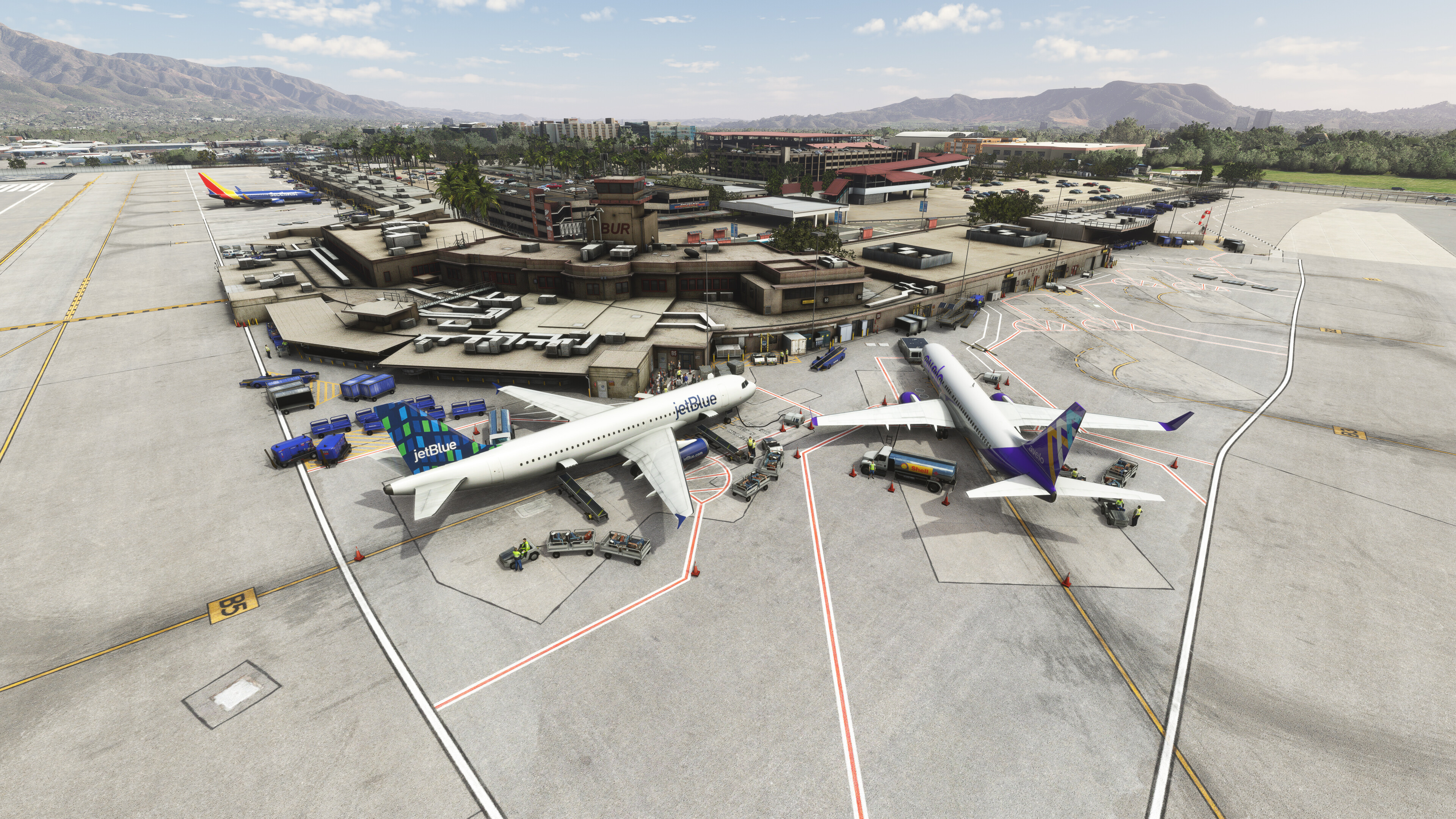 Explore the skies of Tinseltown today

Do existing owners of KBUR get this update for free or is it a separate purchase?

Just bought it on sale (did not have the previous Burbank of MSFS). Will be testing it out tonight!

It was planned to be a paid upgrade but that idea was scrapped. It should be a free upgrade.

Yes it’s a free upgrade if you own V1.
At least the performance and quality is better than V1 in some areas.

Woohoo! Looking forward to it.

(I have to wait for the Marketplace update, but that’s my own fault.

As an owner of KBUR v1.01 it was a little complicated. You first need to uninstall the old version via ORBX Central. After this log in at ORBX´s website and put KBUR v2.0 in your shopping cart. It will show up with a 100% discount. Restart ORBX Central and choose KBUR on the map (should be red now). Now you can install v2.0

It is still fairly heavy, but suspect that is due to the surrounding area. The runway textures look a lot better. The tower looks better. The terminal doesn’t look all that different. I only had v1 in P3D… never MSFS.

Maybe you have your LOD set too high.My fps isn’t sky high but its nowhere as bad as JFK or Atlanta. Burbank area performs well on my rig. I am able to get 40+fps if its a clear day.

I’m on my older rig right now. It runs smooth, a bit lower FPS but I’m happy. I needed to add Burbank and glad I have v2. Certainly heavier than any of my Flightbeam.

Edit: I flew around a bit more BUR in the PMDG. That view taking off rwy 35 and then coming around in a left pattern for the same rwy 35 is absolutely beautiful, a little breathtaking even. I applied the NDU placebo effect and funny enough it seemed just a tiny bit smoother. No stuttering, still a bit heavy on my older i7-9700k / rtx3070.

The airport environment texturing of this airport is very good. The environment feels alive, runways look great, taxiways, etc. I really like it now that I have had a few hours with it. I’m happy to add this to my list of airports around the LA area.

I got it for free as I had V1. Well worth it, the runway gradients themselves are very realistic.

Would thoroughly recommend this to anyone who doesn’t have it, although it’s not the easiest on frames…

I also received the free update today. However, ATC issues really killed the immersion for me.

You would think Orbx would send some instructions for these types of upgrades…but no… they are content to let us wander in the dark. One step forward two steps back

You would think Orbx would send some instructions for these types of upgrades…but no… they are content to let us wander in the dark. One step forward two steps back 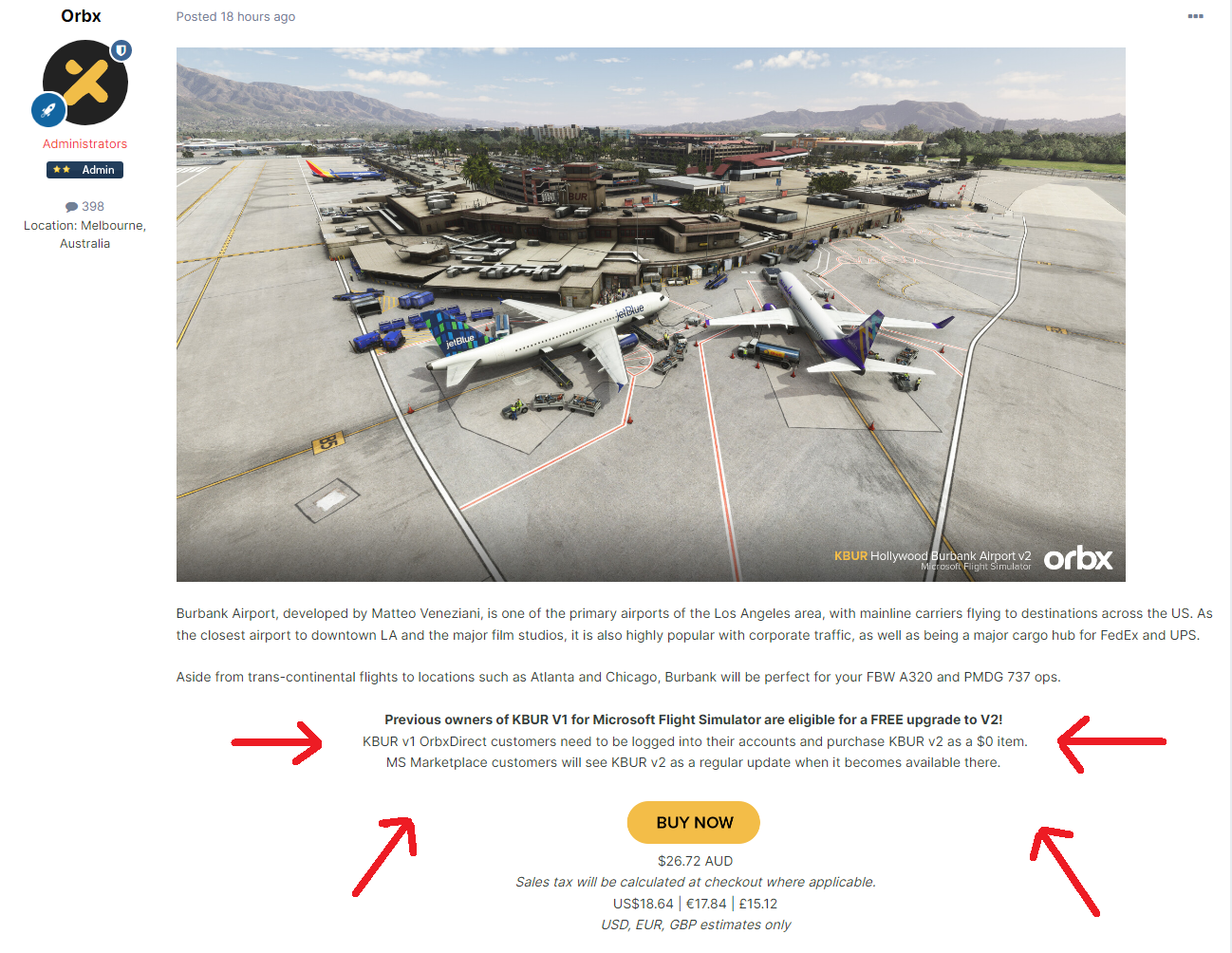 For what it’s worth, the word “upgrade” doesn’t appear at the page linked in the original post, which appears to be the product page.

I wonder if the marketplace version will be retitled to V2 as well, or will it just stick with the previous title and just get the new content and price.

@ ImmersiveVR The email I received from Orbx re the upgrade had NO instructions on how or where to upgrade, you must have received a different email.

Just upgraded to V2 the other day. Honestly don’t have any idea why everyone is having a hard time figuring out how to get it though?? I logged on to see if V2 was released. It was, so as it was showing up as a different product, I uninstalled the old, saw that it was free, and I just installed it. That took about 45 seconds or so…

Not having the performance troubles that others have had over on Avsim and here. In fact, I have the best fps I have ever gotten here. The old one was atrocious and I just used the freeware version on Flightsim.to.

My one complaint, the textures at the airport are still not that great. Otherwise, it is an acceptable scenery.

I owned v1 and upgraded last night. Upon landing I was bounced up into the air. Not sure if this is a scenery setting or a scenery fault

They told on ORBX forum that v2 free update is also eligible for v1 owners on MarketPlace, the only question is when and how can Asobo do that.

Many sceneries took 6 months to one year since released until they appear on in-sim MP. A long wait until summer next year should we also expect!