Currently meteoblue uses a ‘forecast data’ - this is where the sim gets it’s information from for cloud coverage, precipitation. This is currently coupled with certain weather data the sim takes directly from the METAR, this is currendly ground winds, temprature and pressure.

There are advantages and disadvantages of both. Using a forecast model obviously means sometimes the forecast is wrong, and when they get it wrong, this is when it doesn’t match up in the sim.

They could just rely on METAR data, however this comes with big limitations. For example for cloud cover, many METARs when the cloud base is above 5,000ft, it gets reported as CAVOK. So it could be overcast cloud yet if this overcast layer was at lets say 6,000ft the metar would report CAVOK or NCD (No cloud Detected) This would then show the weather in the sim as clear which isn’t correct.

Going forward I think they need a mix of both their meteoblue forecast model AND the full data from the METAR to give an overall ‘picture’ of the weather.

Another further limitation is that the weather forecast data seems to get updated twice a day. From what I can gather this seems to be around 07:00z and then again at 19:00z, or round about those times. The issue here is the later updata of around 19:00z loads in the weather model data for the following day. So if you are flying in the sim at that time, you are going to get the weather for the following day to come and not current weather. This is currently a huge limiation of the model they are using.

You can sort of get around it I find, by changing your PC time back a few hours, so let’s say if it’s 19:00z and its already loaded in the model for the next day, change your pc time to let’s say 15:00z and it will switch back to the weather around that time. It won’t be 100% correct but I find it’s okay as a solution for now especially if the weather forecast the next day is drastically different.

I would say that, in concept at least, the approach chosen by Asobo in partnership with Meteoblue is a much better solution than how ActiveSky does things.

ActiveSky is using METAR data in order to determine conditions at various weather stations, and then is interpolating the data to get conditions in between stations. This has the advantage that the data is pretty reliable and comes in small packets. The disadvantage is that METAR data is not enough to accurately reconstruct the conditions at any given location.

What Asobo is trying to do is to utilize live weather data to reconstruct the entire atmosphere. This implies more detailed, higher resolution data which could be updated as often as every 5 minutes. Much more frequent than METARs, who usually update every hour.

Of course, this is all in theory. In practice, ActiveSky delivers much better results than Asobo’s current solution. Of course, ActiveSky have had way more time to work on their system. But to me it isn’t clear right now which system will be better in practice. But i do know that Asobo’s concept has more potential than ActiveSky.

Everything you guys are saying sounds good, but for me it seam with time from the start of MSFS2020 using meteoblue seams to get worst not better. I know we must have patience at it was with other sims but it would be nice to see some improvement!

Another further limitation is that the weather forecast data seems to get updated twice a day. From what I can gather this seems to be around 07:00z and then again at 19:00z, or round about those times. The issue here is the later updata of around 19:00z loads in the weather model data for the following day. So if you are flying in the sim at that time, you are going to get the weather for the following day to come and not current weather. This is currently a huge limiation of the model they are using.

Each model run should contain data for at least the next 24 hours from the model start time, and since the two model runs overlap by 12 hours, there is no reason not to get the current forecast hour data.

Having worked with other weather models in other applications and industries, I know that each forecast hour is time/date stamped so there should (theoretically) be no problem. If you are located in KJFK at 23:00 UTC on April 24 2021, you should get the forecast for KJFK for that date and time.

What appears to be happening right now also happened about 2 months ago. Looking at the worldwide weather map in-game, the displayed cloud patterns are not from the future forecast model, nor even the recent past. The data being provided is at least 72 hours old (if not older) throughout the world. Something has broken down with the importation of the MeteoBlue model into Azure.

It shouldn’t require ZenDesk reports to fix this. It would be easy enough to implement a data sanity check into the servers to alert whoever is responsible for maintaining them that the weather data is seriously out of sync with real time and needs to be checked.

And, I absolutely agree that the date/time stamp for the model forecast hour being provided should be displayed somewhere in-game so that sim users can see at a glance if they are getting the correct data.

The last time this happened, (also just before the start of a weekend), it did not get fixed until the beginning of the following work week. Apparently nobody at MS/Azure/Asobo works weekends.

I agree on this. I’m noticing the weather is definitely much older. I did file a bug just now so its recorded. Also the Timestamp idea is good… that shouldn’t be that hard to implement.

Great Idea … unless you are trying to hide the issues !!

Having worked with other weather models in other applications and industries, I know that each forecast hour is time/date stamped so there should (theoretically) be no problem. If you are located in KJFK at 23:00 UTC on April 24 2021, you should get the forecast for KJFK for that date and time.

Yeah for whatever reason MSFS sadly doesn’t work like this, it would be great if it did. I’ve observed when it gets to around 19:00z (sometimes give or take a couple of hours) I can sit and watch the weather change completely. You can see that in the video I posted above in LEPA where it was clear skies and started injecting in clouds. The forecast for the next day was what it seemed to be injecting.

I’ve even seen this in the map where it shows cloud cover. When it changes, I’ve compared satellite cover photos to what it is currently and what the forecast is for the next day and this also matches up with that MSFS/Meteoblue seems to be injecting.

The frustrating thing is that as it stands I’d say there’s a 12 hour period of around 19:00z - 07:00z that the weather in sim is just completely wrong, even with the current issue it’s experiencing aside.

I can also confirm live weather is currently showing old data. Same thing happened a few weeks ago. I suggest that Asobo implement an automated process for identifying and resolving this rather than rely on user reports. Especially since it can be down for multiple days before they fix it.

This whole issue is rapped up in contractual obligations I expect.

Confirm, old weather data for me as well.

The cloud patterns over the US look closer to current satellite photos right now (20:15Z Sunday April 25th), but the temperatures aloft are way off. Climbing through 6000 feet over central New York State shows a temperature of -16C. Actual temp today at that altitude is +4. -16 would have been about right about 4 days ago (Thursday April 22) when we had a cold air mass over the northeast and a late-season snowfall, but definitely not accurate for today.

I’m willing to accept new bugs or issues that crop up, but when it’s a repeat issue that was supposedly fixed last time, well it’s frustrating to say the least.

Since a few days the live weather is not working anymore. It’s been 3 days that there is full clear sky in France in real life and everything is cloudy is MSFS…

Not on my side, flying in France since days and days and it’s kind of accurate based on my real source data METAR to check it out… same for today where I was flying from very cloudy to CAVOK; Alpes to North of France/few clouds as published by AEROWEB (even the icing conditions predicted by the site was at the right Altitude-pressure today which positively surprised me!)
You may have an issue somewhere on your side because if it was a “generic” bug then I should be affected as well I guess

For me, North America, Pacific Northwest, the weather is wrong (regardless of where I fly in the sim), and has seemed to be static for several days now.

Is it possible that based on my physical location the sim connects and updates a particular set of servers? That could explain why a NA player sees static weather and a player Europe seems something closer to live weather? 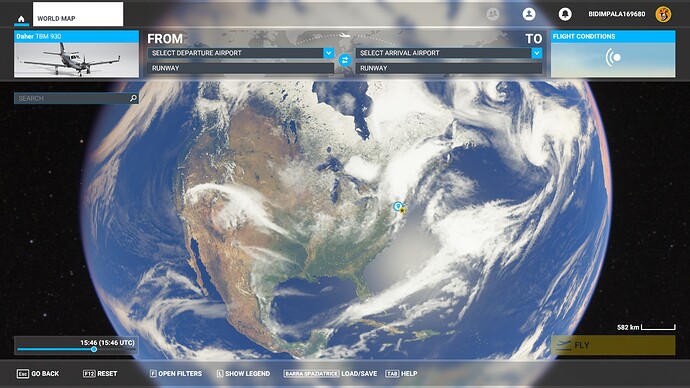 Are the live weather gods awake yet? How many zendesk sacrifices does it take for them to notice?

Are the live weather gods awake yet?