I´ll create this as a separate topic this bug is, unfortunately, recurring and other users report it too.

While using Live weather during flights longer than 70 minutes, the cloud layers stop being injected into the simulator. The weather and temperature, together with winds continue being injected, however the clouds are not. In all reported cases below the cloud layer was supposed to continue, however, instead, it is cut along a uniform line. It usually stops being injected in the vicinity of Denmark (majority of noticed cases), but also over east Germany.

My MSFS is a Microsoft Store edition, don´t have any weather mods in my Community folder. Started occuring only after updating to SU7. 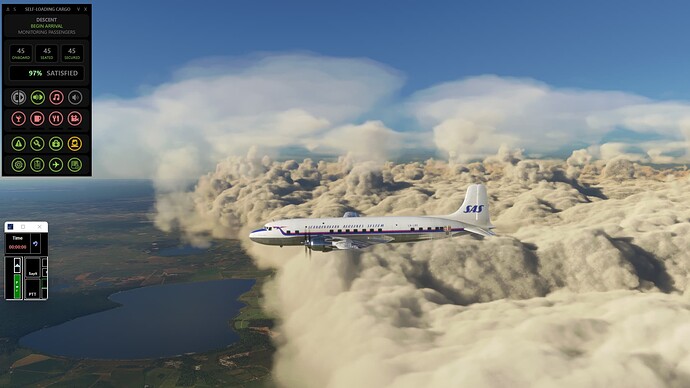 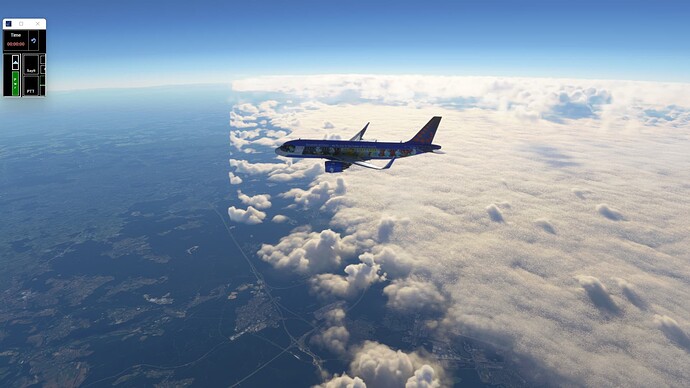 Over North Germany, heading to Denmark 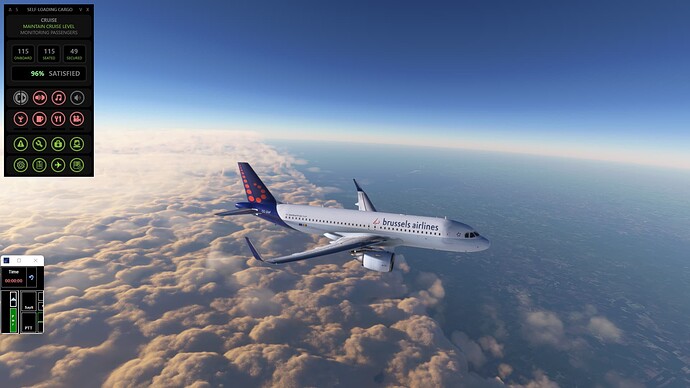 Do other simmers experience similar cuts?

Just another reproduction, tonight at 20:15z, west of Paris enroute to Nantes, 71 minutes into the flight. Time of the day changed for better visibility. Injection of cloud layer stopped rapidly, when flew further away from the cut, the live weather completely reset to “clear skies” (with winds, pressure, temps and no clouds) 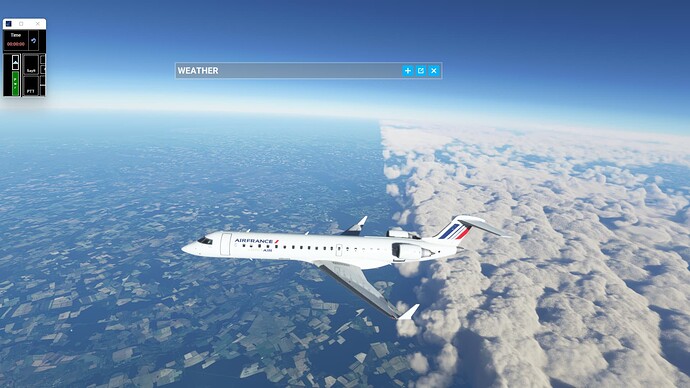 I´ve replied to the user privately, let´s please focus on the topic of the thread and that is the possible crash of live weather injection after a particular time / distance . I´ve noticed that several YouTubers who flew after SU7 did not encounter this issue, while I keep seeing either here, or on Discord, that some users encounter this issue from time to time and it might be useful to establish, whether it is server related or maybe some third-party add-on related (disclaimer - I don´t have the Unreal Weather or any weather mod installed). To me it occurs regularly.

Yep, same here. On longer flights this shows. Similar cut-off clouds. And a sudden change in pressure resulting in the auto pilot disengaging.

On a flight from LSZH to EGPH today. Looked exactly like on your pictures after 1 h 7 Min. Same happened on the flight back. Also after 1 h 7 Min. Tried to switch live weather off and back on after a while - did not fix it.

Did so, my ticket number is 137015 . However, in my account, it already says that the ticket is “solved”, one minute after submitting it, so I have serious doubts anyone will have a look into it. We´re basically left to our own devices here…

What I would suggest, is file the bug report under the option ‘I need help with something else’ - this way it doesn’t automatically get marked solved.

Plus for me this is the most relevant because the things I am reporting aren’t small bugs which don’t prevent me from playing, they are big bugs which is why I haven’t used MSFS in any proper way since SU7

Hi, I am experiencing the exact same problem, I began to notice it one week ago or so. At first, I thought it was caused by my connection (so I tried the usual, reconnect my WiFi toggling online functions in the game off and on etc), but the same thing happened in the following days. It’s actually bothering me so much that I registered on this forum just to post on this thread, lol.

I believe this bug is related with the distance from the departure airport, and not with the elapsed time. What I think it’s happening: when you begin the flight, the sim loads just the Live Weather that’s inside a specific radius from the departure airport. That’s probably how it always worked. The difference now is that it’s not loading anything afterwards, like it’s missing a command to keep loading the weather or not being able to connect with the servers with the game running for some reason.

So, this bug doesn’t happen when you flight shorter distances. Today I did a shorter one (SBGR-SBJV, around 210NM) and was able to land with real weather conditions. But whenever I try to go farther than 250-300NM, the Live Weather resets to the “clear skies” preset at some point and stays like that until the end of the flight. And if I try to start another flight in sequence, it doesn’t load at all, just like it’s happening with you.

I have already experienced the same problem flying in Brazil and Japan, so it’s not related to a particular place. It happened with the A320, 747, CJ4 and King Air, so I believe it has not to do with a particular airplane, just with the distance of the flight.

Right now, if I want to land with real conditions in an airport farther than 300NM from the departure one, I have to look the METAR and the weather conditions in a website like windy.com and set the weather myself (wind, temperature, pressure, clouds). It’s really frustrating, and it worries me that just a few people are complaining about that.

I’ve already filed a zendesk report, but received no answer as well. I’ll keep waiting for some fix, hoping it’s coming before February, because it’s ruining my will to play right now.

Interesting point. I tried to observe this on my afternoon-flight from libd to lszh. According to the flightplan, the live-weather was supposed to stop working at the waypoint naxav. Which it exactly did. So that would back your theory.

Other than that, flying above FL240 was not possible in the FBW A320. Engines and autopilot going totally crazy due to sudden and radical weather changes. That was definitely not the case this morning.

I am coming to a point where I start to regret having whiped my old P3D from my harddisk… When switching from P3D to MSFS2020 I was so happy to have a hassle-free sim coming with everything that needed a separate tool before. Well, as for now, that dream has surely not come true.

So please Asobo: Make smaller updates and test them thoroughly! It is really quite frustrating that after every update so many things are broken and only a few chichi-things are better.

First of all, thank you for the feedback and also for your observation.

I agree it seems not to be time related, but a distance related, as I myself flown today shrorter-distance flights and spent a long time in the simulation itself, and the weather worked (well, within its post-SU7 limitations, I am not going to comment on the cloud types or height). I haven´t encountered the temperature bug, but I see all over the forum and Discord that people are suffering from the temperature bug today. Nevertheless, I´ve renamed the topic.

If I remember correctly, multiplayer was disabled when it happened the first time. Since I thought it was a connection problem, one of the “workarounds” I tried was enabling it again and changing servers, but it didn’t make any difference. I’ve been flying with it enabled ever since, not sure if it’s on automatic or fixed on the last server I set, will look into it next time. And maybe try other stuff like disabling live traffic (don’t really think it really makes sense, but who knows?)

I didn’t encounter the temperature bug either, just the weird clouds heights. Anyway, the bugs may vary a little, but I think we can conclude that the weather is a mess for everyone.

So, it looks like some changes were made on the weather servers, or maybe it’s just a coincidence, but today I was able to complete two flights longer than 300 NM in a row with Live Weather working, even though the weather still a bit inaccurate (landed in an airport close to where I live with thunderstorms approaching in real life, but no clouds visible in the sim). But this time I didn’t see the usual “line” of clouds where Live Weather fails to keep loading, and the wind/pressure/temperature were close to real life on landing (no 225/03 from the clear skies preset anymore).

I flown with the CJ4, below FL 260 (to prevent the temperature bug), with live traffic disabled and multiplayer on, set to the North Europe server. Not sure if any of these made any difference, but maybe you guys can try settings close to that if the problem persists.

I am happy to read this. I must admit that after the temperature bug, I just gave up trying and realised that we really need to wait for a fix, hoping that things will be fixed. I´m now flying with presets, and it´s not such an unpleasant thing - a little laborious, but not the end of the world.

Nevertheless - I will fly the DC-6 tomorrow, low and slow, for a flight longer than 300NM and will report. I´ll use the same settings you mention. Thank you once again for coming back with this promising news.

Maybe this issue has already been resolved with some server side tinkering by the Devs.
It would have been fun to fly out to the perimeter then turn and follow the intersection and use Little NavMap or Volanta to track the flight…the flight track may indeed have been a circle with a certain radius around the origin…

Can’t confirm. Flying from LSZH to EIDW on FL360 hit by temperature spike. Descended to FL280, everything was fine. Shortly after, live weather disappeared, setting the wind to 225/03 and no clouds.

Can´t confirm either, unfortunately. Did a test flight longer than 300 NM, temperature spike present as well, but also the live weather disappeared approximately after 300 NM, reverting to default clear skies.

Checked on my flight back, bein on the europe north server. 300nm-bug ist definitely still there.