Currently having this issue in Europe.

Flew this morning with no problems, everything working, perfectly. Switched game and pc off, went to lunch. When I returned and booted up and launched game I received the dreaded low bandwidth message. I have added or removed nothing to the game, nor I have changed anything else on the pc, could this be a server issue and I just need to wait until the servers come on stream again? I am in Europe. Any thoughts appreciated!

Just tried landing and got the annoying connection lost, then connection ok, then lost, etc for my entire approach.
Decide to just click go offline after it happened for the dozenth time and i was only about 1nm out, and then the nice runway all of a sudden turned into an off-field landing surface.

How about this Asobo/MS. How about giving users an option to TURN OFF that annoying pop up box that gets triggered whenever your online services are bugging out? That way i, and everyone else, can continue on our happy flights without getting a pop up box every 20 seconds.

How about just a local version that doesnt look like FSX but looks like bing then we dont have to play over the network/server and still have a good looking game…Oh what yeah that would shine a negative light on the cloud…Nevermind.

I cs t see how they could have an offline mode that looks just like the online mode. Where would they store all the masses of ground textures?

Ground textures are repetitive, all they have to do is store x amount of texture files, and then let the sim draw from your local machine. I dont buy that there is a baziilon mega bytes of data needed for storage, you simple need the textures your going to call and a executable that can read a map of the world detail of 0 and 1’s and translate and display them on your machine.

I think 12 will be the big test as to how much local data your going to need to simulate the entire planet…
Just saw an advanced update 5 for 12, so we got to be getting real close, unless of course they plan on releasing advanced update to 20 or so ;p

Ground textures are repetitive, all they have to do is store x amount of texture files, and then let the sim draw from your local machine.

That’s essentially what the current offline mode has. It’s sounds like what you want is the online quality textures on your hard disk.

Yes, which is just a matter of giving us better offline textures. I havent pursued the texture files on the local hd, but I would really hope they aren’t streaming the same HD textures over and over again as you fly along.

Like I said we’ll see what happens when 12 pops, All the screenies and such Ive seen so far make it look just as good as this if not better since they haven’t removed the ground traffic real looking storms etc. Only time will tell.

I just had this message, and never saw this effect before. The scenery, at WADK, is partially loaded. 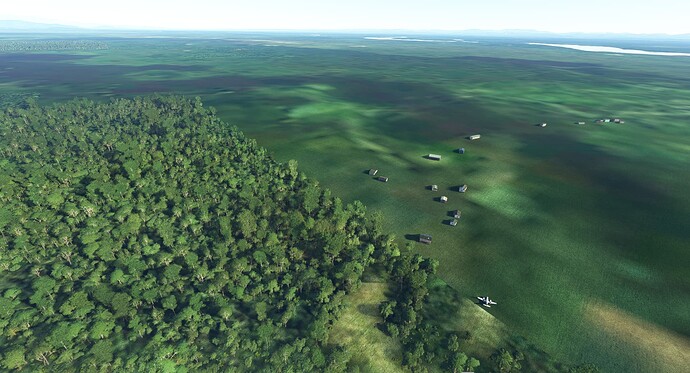 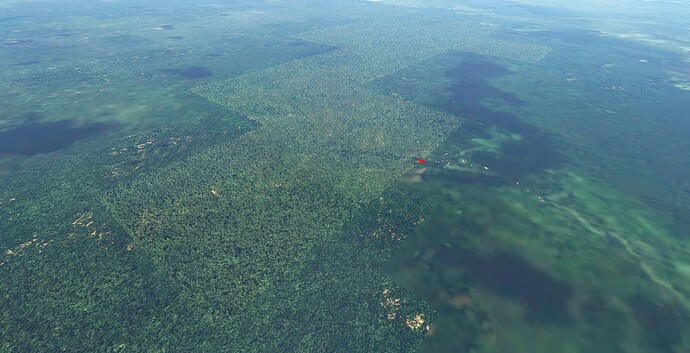 Bing data also got turned off, except for those few squares of trees where I spawned. I turned that option on again, and the terrain returned.

All morning terrible fps and my lod is gone as well, 20 miles out nothing but the bldgs… Ive tried 4 times already and always the same bs. Guess the PG servers are struggling yet again…Lets try this:

Hey you kids get off the computer and quit playing that simulator, get outside and play its a nice day outside…

Okay did that work Bwhahahahah!

Can anyone confirm if Asobo have acknowledged there is a problem with, I presume, the European servers to explain the loss of connectivity/data etc? I have not been able to fly all weekend, although everything was fine last week and I have made no changes to my system and my internet connection is fine for everything else!

Find the roadmap, it should be there…last time I read it a couple of months ago, they confirmed that people think they have a problem, but they cant reproduce it. Go figure…I can play most of the time but Sat night and the 5 or 6 times I tried today, 15 - 16 fps and T lod that disappears at about 20 miles.

I’ve started getting this sinc e the latest (USA) update. ANd when the connection is lost I have to go and turn back on the Bing Data setting. Happens every time I fly now…and I even ran Speedtest by Ookla immediately after getting the connection lost message and my connection was fine…

Bufferbloat Test by Waveform < here try this one and see what kind of latency you have, Ookla last time I looked doesnt give you latency numbers last time I looked and latency seems to count alot. ie the more latency the worst the sim seems to run, no matter how fast your connection is.

I have between 9 and 12ms. Do you know what level of latency causes a problem?

9 to 12 isnt bad … its when you start hitting 25-triple digits that you have to worry.

Man what is up with the “connection loss”?

Almost every day now as I’m in the middle of a flight I keep getting these random “connection lost” pop ups and then a few seconds later says connection successful.

This is the exact same thing that is happening to me now for a few weeks. so annoying. Also, I have excellent internet. This game is the only one that gives me problems with connection.

This is just Another Asobo/MSFS thing.