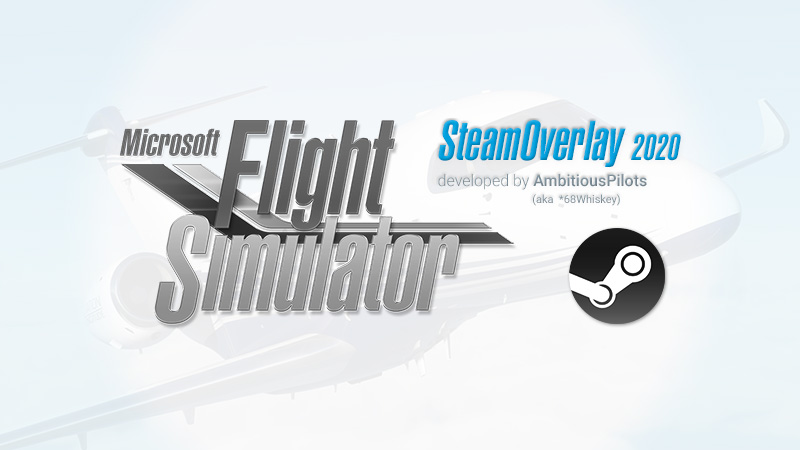 Finally use Steam with Microsoft Store version of Flight Simulator

Use steam web browser during flight (for airport charts, etc.)

Works on single and multi-monitor setup

At the time of writing the way Microsoft Flight Simulator is installed on your machine when you bought the Microsoft Store version prevents Steam from accessing the FlightSimulator.exe making it impossible to add it as Non-Steam Game, thus the Steam Overlay cannot be enabled. Also taking ownership of the Flight Simulator files does not work.

Therefore I created a workaround that makes it possible to add the Steam Game Overlay to the Microsoft Store version of Microsoft Flight Simulator.

It’s based on “FSJumpStarter2020”, so the intros and “press any key” screen are skipped automatically for you as well.

Questions, remarks and feature requests are more than welcome!

This no longer works, because MSFS doesn’t have the Press A Key… issue anymore. Using this launcher now causes issues with keystrokes being seen in the welcome screen and makes FS unusable (works fine without this launcher). Can we get one that ONLY gives the Steam overlay capability without sending any keystrokes to the app?

Is it possible to do this with other Windows Store games? I’d love to get the Steam overlay in a few others.

Sure, that is possible. However that’s not the scope of the project and making it work for other titles requires custom adjustments.

I might open a new repository on GitHub where you can open an issue requesting all the games you’d like to have the steam overlay working on.

Will update you when that is the case

Yes, the SDK and WebAssembly have been improved. I’ll rework the steam overlay. Keep an eye on this thread, as I’ll update it when a new release of FSSteamOverlay2020 is published.

Looks like MSFS2020 have got a new launcher with latest update. Is steam overlay still working?

Upd: no, its not. any plans for update?

Yes, an update is planned. I cannot tell you an exact release date yet, but I’ll post an update here as soon as it’s ready.

Is this still needed now that you can bring any window and desktop into your VR world with SteamVR?