[MOD] Start FS without waiting for "Press Any Key" screen 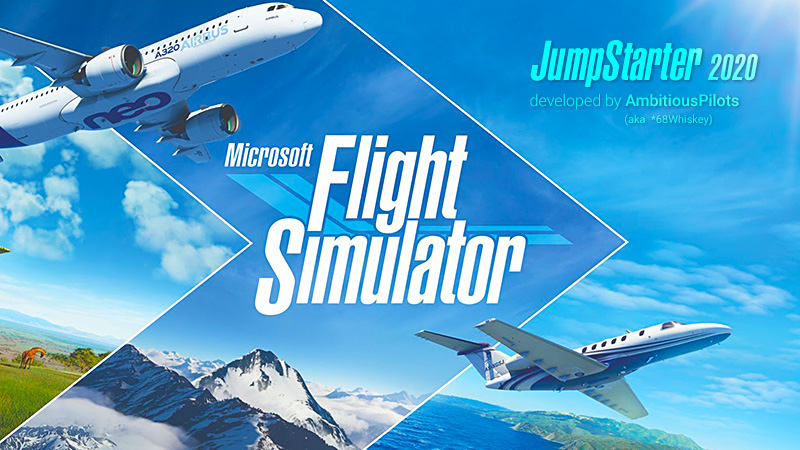 I wanted to automatically skip the “Press Any Key” screen, so I could do something else until FS was done loading the main menu, and was tired of staring at the same intros over and over again wasting time.

So I created FSJumpStarter2020 to fix this, which I want to share with you.

Works on single and multi-monitor setup

­
Download and launch to jump start Flight Simulator. The press any key screen is visible right after starting FS, but only for a split second until FSJumpStarter2020 skips it automatically.

Questions, remarks and feature requests are more than welcome!

You are what the community needs. Impressive!

I downloaded it and it works. Is there a way to get it to work when you launch the game from Steam? Not a fan of launching a random .exe every time I boot up.

It includes the FSJumpStarter2020 so you’ll get the benefits of this app as well. Add FSSteamOverlay2020 to steam as Non-Steam game and put a shortcut on your desktop. That should be what you’re looking for

EDIT: If you have the steam version of FS, just add FSJumpStarter2020 as non-steam game. That should do it.

Honestly I’d prefer an installation, also not a fan of the random exe. Great work though.

The exe runs to detect the “press any key” screen. After the screen has been skipped, the exe is shut down automatically, so it doesn’t run alongside FS.

What kind of installation would you prefer? A solution that could be installed into e.g. the community directory of FS is not possible, as FS loads these files only after the press any key screen has been skipped.

Ah I see what you mean, I’ll let my brain brew something together ^^, but modifying base files would require to be updated after every FS update as these possibly get overwritten. Currently, the exe is the most straight forward and non-destructive approach.

Avira Prime report on: FSJumpStarter2020.exe contains: HEUR/APC virus
Anyone else experience this?

The exe is new so Avira doesn’t trust it. Furthermore the exe looks for the flight simulator window to ensure it has focus before attempting to skip the press any key screen. This process uses a so called P/Invoke (see: https://docs.microsoft.com/en-us/dotnet/standard/native-interop/pinvoke and https://stackoverflow.com/questions/32965310/how-to-get-active-window-that-is-not-part-of-my-application). This might be the reason that triggers Avira. My norton didn’t complain.

Edit: I’ve had a look on the Avira Knowledgebase about the HEUR warning (https://support.avira.com/hc/en-us/articles/360000819265-What-is-a-HEUR-virus-warning-). APC stands for Avira Protection Cloud. Avira says the following about the warning:

This does not mean, however, that the code is a virus for sure; false positives may occur. Please send us the files that were heuristically detected for further analysis.

I sent the exe file to them here https://www.avira.com/en/analysis/submit so they can examine it.

Thank you for your submission. The files have been sent to our VirusLab analysis. If the submission is indeed a false positive, the detection will be removed from our virus definition file.

Sound really great. Reading you and it seems very good and a clean work! I downloaded it and will test soon.

Nothing wrong with being careful. This forum might become attractive to malware and virus gurus.
Eventually, some troll will create an .exe that destroys your copy of the sim and maybe your OS in the process.

Good, it looks very good, we will try it.

@AmbitiousPilots Any way for it to go in the system taskbar (minimized) and then shut itself down after the sim starts up?

Hah you beat me by less than a day!

I wrote a Python script that reminds me to disconnect my VPN (it disables ipv6), then it runs OpenTrack, then AxisAndOhs, and finally launches MSFS2020.

The final piece was bypassing the Press Any Key bit, but I was trying to do it by automating mouse clicks and timing (it takes about 40s for me to get to that screen after launch). Just this morning I got it working but didn’t have a 100% success rate.

Later today I was wasting time at work and found your thread!

Just what I was hoping to do, so thank you for saving me the time and head scratching.

thanks, can now grab that coffee whilst it fully loads to menu and also now puts paid to head of Asobo rolling his eyes again when we ask to have it removed. They can take it out of backlog now and fix something else. Great work, I love random .exe files , windows 10 runs on them !

Thanks for the effort, but since there is no source code on your github repo, you should at a minimum sign the executable with a valid digital signature. Running random exécutables from unknown sources is just asking for trouble.