Yes, when you disconnect the autopilot and yawdamper, thats what the aircraft is gonna do, because the autopilot always flies the approach in a side-slip

. And when crabbing to the runway, the crosswind is actually a quartering headwind… WHAT???

99% of the reactions on that video:

“This guy is probably an ex cfi, and probably had a 100 percent pass rate as a cfi.”

“Using adverse yaw to your advantage is brilliant :D”

Another self-proclaimed expert. Unbelievable, I hope there aren’t any people stupid enough to actually take this nonsense into the cockpit…

Another self-proclaimed expert. Unbelievable, I hope there aren’t any people stupid enough to actually take this nonsense into the cockpit…

His aviation “expertise” and techniques may be questionable — likely a result of experimentation in a sim with no inertia modeled — but he is certainly more convincing than PsychoticStreudel.

Is it just me, or did anyone else get an intense urge to buy a used car?

His aviation “expertise” and techniques may be questionable

Replace “may be” with “are”

but he is certainly more convincing than PsychoticStreudel.

Which increases the risk of people taking him seriously, making him more dangerous.

These dudes and their whiteboards

Seeing as you are critiquing videos, any thoughts on this one?

This is fun, at 2:30, increasing the climb rate by turning into the wind is bogus.

His explanation why not to use flaps makes somewhat sense but its not the main reason I would say. Without flaps the approach and landing speeds are higher so the wind has less effect, crab angle is lower, flight controls are more effective so less rudder input required. Not because the flaps increase the wing surface area or the wind “can get underneath”, a lower wing loading does make the aircraft more sensitive to gusts and turbulence so its not incorrect.

Another reason to use a lower flap setting, especially on airliners is to reduce drag and preserve kinetic energy, improving go-around performance for a potential windshear encounter.

Looking at the windsock, cool but you can better look where the nose is pointing to see where the wind is coming from. I’ve had students (and first officers) applying crosswind controls in the wrong direction or ailerons to the wrong side on the ground after landing because the wind was reported to come from the other side

The landing itself is very nicely executed, nothing wrong there.

Aerodynamic braking is not very effective, certainly not as effective using the brakes, I wouldn’t do that in gusty winds or crosswind, it has no benefit and only induced risks. Especially in crosswind since you reduce load on the nosegear or lift the nosegear off the ground. You lose the nosewheel steering doing that while in the meantime the rudder becomes less effective as speed decreases.

Otherwise its a great video and explanation.

because then its not a direct crosswind anymore, it becomes a quartering headwind

It is unlawful to incite violence through You-tube, but apparently it is ok to incite disaster. This whole video should require a disclaimer, “Consumption of these pseudo-facts could be hazardous to your health” along with a photo of a crashed airliner.

I’ve been away from the forum for a couple days. I am not sure why I did, but I read through since my last visit. I have to ask @AdherentToast91, is English not your first language. I am getting the sense that whatever translation software you are using is not doing your posts justice. I was unable to comprehend a good portion of your posts. I have been speaking English since my first word and consider myself pretty fluent. Are we reading translated posts? If not, is this the same way you would carry on a conversation with friends, over a beer?

Overall I see clear communication including good explanations to questions when asked backed up with obvious real world experience that are easy to understand for the less knowledgeable, which promotes learning. With one exception.

I am not alone.

Please, let’s keep the flowery, veiled jabs out of an otherwise productive conversation. And remember, many people here are NOT pilots and so simplification is paramount if they are to learn anything from the experts that are here.

Cheers, interesting to read your take on it.

I’m not going to criticise the fella at all because he’s a CFI and I am definitely not, and thought both the video and his style of explaining things was well done . But it was the comment about the flaps increasing the wing size that had me wondering as I’d not heard or seen that before, but rather as you described.

I watched it and thought it was just a good visual real world example of how the aircraft in this sim, and some of the issues they have as discussed here, are certainly not where they need to be. Onwards and upwards Asobo

But it was the comment about the flaps increasing the wing size that had me wondering as I’d not heard or seen that before, but rather as you described.

I’m not sure if that is true on the C150/152, I guess he is right and the flaps do increase the wing area on that plane and not only the camber. But it would not be the main reason to use a lower flap setting in crosswind I would say. But its not an entirely wrong explanation, higher wing loading makes the aircraft handle better in gusts and turbulence.

I was just thinking why a higher wing loading is beneficial but that is really simple, if there is a larger wing area then there is simply more area exposed to that gust. If airspeed increases due to a gust, that increase in speed is multiplied by the wing area to get the increase in lift. So its better to have a smaller wing area (= higher wing loading). Higher loading simply is less influenced by gusts and therefore more controllable.

increasing the climb rate by turning into the wind is bogus.

Possibly he meant ‘angle’ of climb.

Aerodynamic braking is fine if you have a lot of runway left. Unfortunately, as Ninja stated it is not nearly as effective as actually applying brakes. Keeping the nose up also allows the wings to reduce some of the weight on the wheels making things a bit dicey in windy conditions. The Boeing manual is pretty clear that the engineers designed the plane to PUT all the wheels down when you want to
control the aircraft on the ground, otherwise, may as well keep flying. This is particularly good advice when the surface is a bit suspect or the available runway is minimal, or both.

Both explanations certainly have their merits and seem logical so to me, but everything i’ve seen so far pointed to the reason you gave so will do some more digging around. Learnt something new today so I’m happy

I’m not sure if that is true on the C150/152, I guess he is right and the flaps do increase the wing area on that plane and not only the camber.

The Cessnas use Folwer flaps. In the older models (1965 and back) they were mechanically actuated, which - in my humble option - was really cool! You could pull in three degrees if you wanted, and feel the effect as feedback through the flap handle. 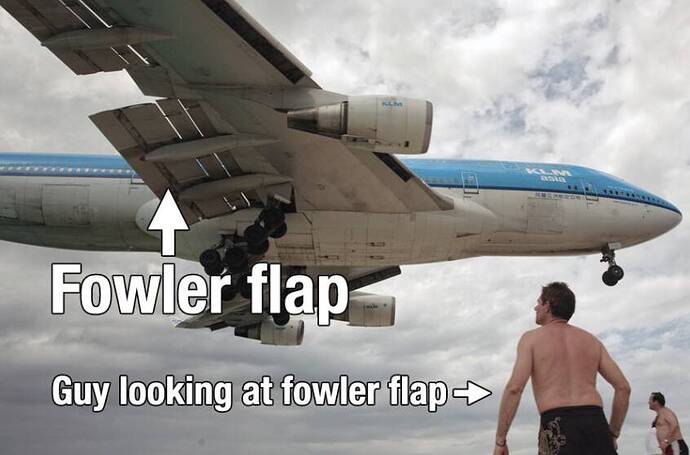 I flew a Piper Traumahawk with a handbrake for the flaps, pretty nice indeed!

One of those two (got to be at St Bart’s that photo) is either a giant, or a midget

I was checking someone out on that plane once, someone who hasn’t flown single engine piston for 2 years. Those clips for the engine cowling were a little worn and on upwind they came lose and one of those flappy engine cowling panels opened and then twisted, completely blocking my forward view.

Sorry mate, you have to land it

The Cessnas use Folwer flaps.

I have to admit I didn’t have any issue with his comment about increasing the wing area. Both Fowler and slotted do exactly that. Split and Plain only adjust camber. I always found Split flaps to be more like brakes than lift enhancement. They impart a lot of drag and allow for steep descent angles without the inherent increase in speed.

The use of excessive flaps, in windy conditions, with light aircraft, though is a recipe for disaster. If the pilot tries to increase approach speed without reducing flaps the end result is more float at the flare which just makes it harder to keep the aircraft aligned with the runway.

I flew a Piper Traumahawk with a handbrake for the flaps, pretty nice indeed!

My favorite was the old Supercub. Prescribed short field takeoff was - no flap, full power, accelerate to 37kts and pull both the stick and the flap handle together. POP! Goes the Supercub!