I am also getting good results from 452.06 driver. That is the last driver that Nvidia stated it was optimized for MSFS. The newer versions have been optimized for other titles. May have negatively affected optimization for MSFS. I’m sticking with 452.06 until a driver specifically says it enhances MSFS.

Yes, agreed. I tried running a newer driver and it seemed that I lost a few frames in my controlled analysis experiment.

There are other spurious stutters in the simulator than I can relate to the simulator code preparing to load and play marker sounds, or loading an airport/runway asset at the last moment because you’re below a certain distance threshold. This is causing a short "freeze’ when on final, in other words at the worst moment to get a freeze in the simulator in my opinion,

My identical setup - would you be so kind as to confirm your exact settings? Hugely appreciated Richard!

open the following file in notepad.exe:

Locate the Sharpen entry, change the value to 0, save the file.

I’d like to give this a try because everything looks awfully pixelated since the last patch, however, I don’t have a folder called Microsoft.FlightSimulator in my Packages folder…? I am using the Steam version. I see Microsoft.ECApp_### and then Microsoft.GetHelp_###: no FlightSimulator in between there…

Is the useropt.cfg located elsewhere when you are using Steam? I obviously searched for the file but Windows didn’t find it.

Mine is in here (Steam version):

Mine is in here (Steam version):

Thanks LOL No wonder I couldn’t find the file with Search… It’s not called UserOpt.cfg but UserCfg.opt…!!!

open the following file in notepad.exe:

Locate the Sharpen entry, change the value to 0, save the file.

Okay, next problem: the changed setting won’t stick. MSFS reverts 0 to 1 again everytime I start the sim. Should I make UserCfg.op read only or something? If I do I won’t be able to make or save other settings, will I?

EDIT
Never mind. Made it read only, loaded the sim but sharpen at 0 still looks the same. And awful.

Shouldn’t this:
C:\Users\your_login_name\AppData\Local\Packages\Microsoft.FlightSimulator_#############\LocalCache\UserOpt.cfg
be rather this:
C:\Users\your_login_name\AppData\Local\Packages\Microsoft.FlightSimulator_#############\LocalCache\UserCfg.opt
?
In my case with 1.10.7 even after applying “Sharpen 0” in UserCfg.opt and the recommended settings in NVC, the trees look overly sharpened.

Settings in Flight simulator are a mix of medium and high, just with the exception of Ultra in clouds (possibly, the best of the game). Nvidia desktop settings untouched leaves me somewhere between 30-33 FPS in low populated/high altitude. Between 25-30 in NYC.

I just tried the sharpening function in Nvidia control panel and lowering the internal resolution to 90% after reading the post and I don’t know…anything beyond 0.1 in sharpening introduces a lot of artifacts, specially in distant objects or reflections.

I don’t know how you guys manage to get clean image with Nvidia Sharpening on. Digital Foundry also recommended it in their video but there must be something on my end which doesn’t allow it to show any advantages.

Besides that, great recommendation!

Thank you all for pointing the typo in my post! I have now made the corrections and this looks like this:

Please note if you’re using GE Force Experience automatic settings, this most likely be the cause for the UserCfg.opt setting to reverting to 1 too. You’d have to disable GE Force from automatically updating the settings then. Please let me know this so that I can update the post accordingly.

Also please make sure to change the correct Sharpen entry, there are 2 of them: One in the {Graphics section, the other in the {GraphicsVR section (which is the entire set of settings when in VR mode).

Thank you for this guide. Managed to get my 980ti at 4k running 30fps which is more than playable now

I set “Sharpen 0” as it should be in the “{Graphics …}” section. When I set it to 0 it sticks, so GeForce is not intervening.

No matter which setting I set in the NVC I still get the pixealated trees in 1.10.7. Another “improvement” by Asobo

Why, instead of fixing the bugs, they mess with image quality? 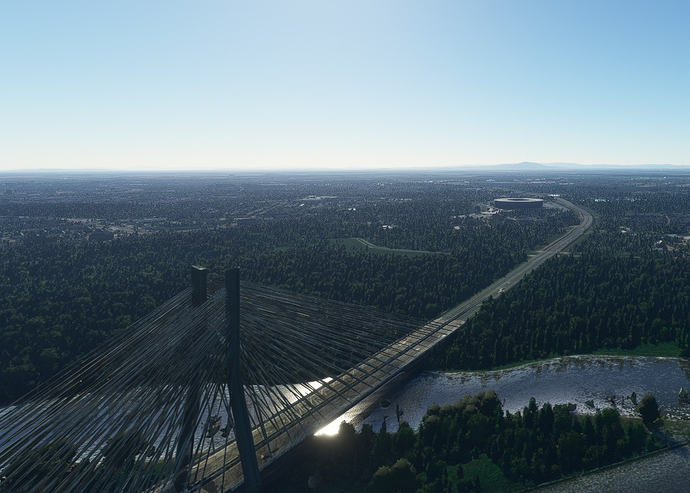 Sharpen 0, NCP sharpening off (below) - this seems like the only setting wihout pixellation, but the overal pictrue apperance is a bit dull. 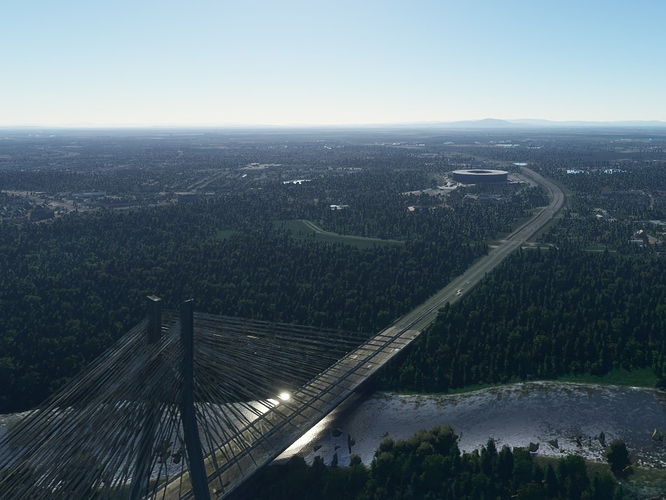 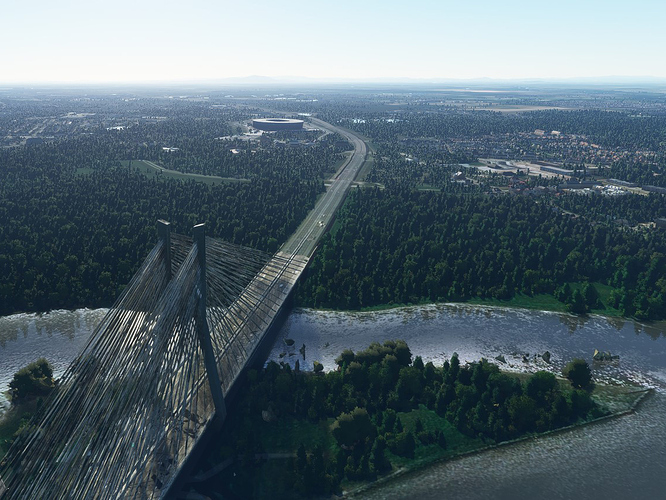 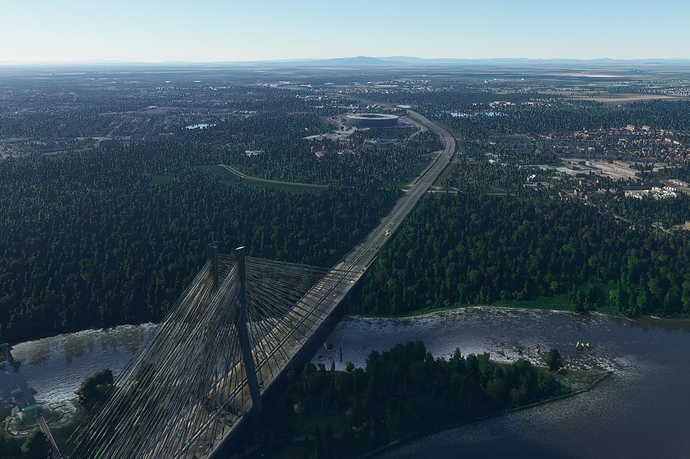 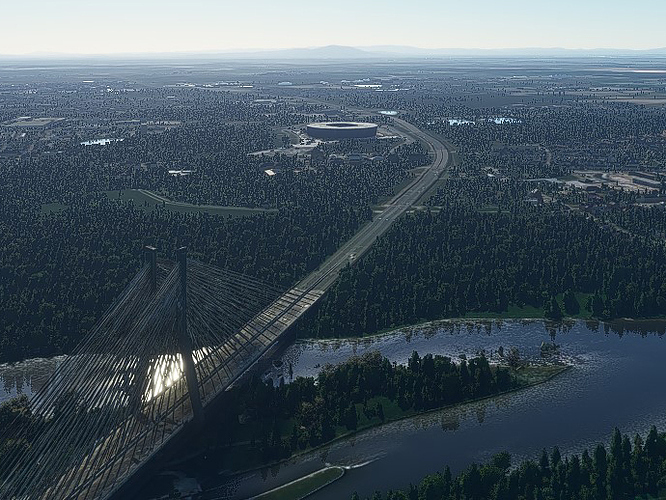 No matter which setting I set in the NVC I still get the pixealated trees in 1.10.7.

This is a different problem and as far as I understand, it is related to alpha testing optimizations usually.

To put this in perspective, here is an interesting articles about modern game graphics:

One of my favorite games of all time, Red Dead Redemption returned with a prequel for consoles in 2018. Then it came for PCs in 2019. I finally managed to play the game and amazed by its graphics immediately. But I got upset because I can barely play...

And a more complete dissection can be found here:

It is a link to the paragraph showing the same kind of artifacts but I recommend you read the entire page and the other articles!

The Grand Theft Auto series has come a long way since the first opus came out back in 1997. About 2 years ago, Rockstar released GTA V. The …

Here is a paper detailing this kind of problem and offering other solutions:

I’m going to radically improve my computer graphics knowledge today evening, trying to undestand at least something from these articles, while waiting for the “USB CTD” hot fix.

However, I wonder why Asobo decided to repair something that wasn’t broken, while there are some other issues around screaming to be fixed. The effect of pixelated trees was not present before 1.10.7.
What looks best to my eyes on the pictures above is the version with in sim Sharpen 0, NCP sharpening off, the 2nd picture from the top.

They didn’t break anything in my opinion, they might just have forgotten to look back in their commit history, or, it might just not been validated by the art director and only changed in v1.10.7 from a shader code perspective only. Here is what I’m observing (which might not be the truth at all, just observation from the outside):

Looking at the evolution of the rendering engine since at least Aug. 18 (can’t official talk about anything prior this date), I believe (and I Zendesk this a while back) the sharpen post-processing effect was wrongly applied to the render buffer (with 70% TAA, the simulator renders to a smaller buffer size than the screen resolution), instead of being applied to the back buffer (the buffer the same size as your monitor ready to be displayed).

At some point in time (from memory 1.8.3) they nerf the sharpening effect because it was not pronounced enough. This was expected because if you sharpen an image 2000x1000 then enlarge it to 3800x2600, obviously you’re loosing some of the sharpening effect. However in nerfing the effect you make edges more apparent and this creates jaggies and blocky buildings for example.

It appears v1.10.7 is now correctly applying the effect to the back buffer. However if the only thing they’ve done is moving the invocation from the render buffer to the back buffer, they might have forgotten 2 versions ago they nerf the effect and it must be adjusted back to initial strength now.

Please note if you’re using GE Force Experience automatic settings, this most likely be the cause for the UserCfg.opt setting to reverting to 1 too. You’d have to disable GE Force from automatically updating the settings then. Please let me know this so that I can update the post accordingly.

You saved my day! I don’t use GeForce Experience, I always only install the driver but someone suggested as a fix to set it to ‘Let the 3D application decide’. This didn’t help and with this setting UserCfg.opt was reset everytime I started MSFS. Even more odd: after making that file read only and checking that Sharpen was still at 0 (which it was) everything still look extremely sharp!

After reading your post I set nVidia to Use the advanced 3D image settings again but left everything at default. This time…

… Sharpen stayed at 0 even with the file NOT set to read only (big plus!)

… the sharpen effect was actually off!!! Awesome! So I finally got this working! The sim looks a bit fuzzy now and I will play with the nVidia sharpen settings later on but even fuzzy the sim looks a LOT better! Finally the trees and buildings don’t stick out anymore and everything looks nice and realistic! (I wish you could sharpen the cockpit only and leave the scenery as it is because it looks a lot more realistic to me this way)!

So thanks for the information about that nVidia setting which also applies when not using Experience!

Just want to give OP a thumb up for all the works and follow up!

What resolution is your screen.Yes one drawback with it off everything appears fuzzy here on 2k and I am a having a hard time finding the best value for the Nvidia sharpening.
You will noticed the sim appears clearer.You can increase your rendering scale up to what your GPU can tolerate.

What resolution is your screen.Yes one drawback with it off everything appears fuzzy here on 2k and I am a having a hard time finding the best value for the Nvidia sharpening.

I tested various nVidia sharpening settings and currently have it set to 1.00 sharpening (otherwise I hardly see a difference… and it’s mainly the ground textures that look a bit sharper with this setting) and film grain also at 1.00…! Anything lower and the film grain will introduce the pixels I am trying to get rid off!

So yes, Sharpen at 0 without any changes in nVidia makes everything look fuzzy but I really like that a LOT more than the ugly oversharpened look! And with nVidia at 1.00 and 1.00 things look a bit sharper here and there without that ugly pixelated noise. This will do for now until they screw up something else with the next update.

BTW It’s a shame you can’t change nVidia setting on the fly: restarting MSFS to test settings is a real PITA.