Check out the following:
How to Get Access to WindowsApps Folder in Windows 10 (maketecheasier.com)

Please don’t post this kind of stuff in this discussion where a few posts above I’m explaining why you mustn’t do this, and why you don’t need to do this either…

TO ALL: don’t change this folder access rights. You don’t have to, you don’t need to, you shouldn’t do it either.

The question is does this effect actual full screen play, when not playing VR? Changing Full Screen Optimizations?

This is a good question. I’ve been trying for some hours today and I don’t see any particular difference. I’m nearly certain it wouldn’t do anything because FS2020 is not running full screen (in the DirectX full screen point of view).

Please note Full Screen Optimization in Win10 is also designed to work with full screen borderless windows but it is possible it is not really making a difference at all with FS2020 specifically. Having said this, some of you might still find it is running better on your system and it is easy to try out and compare.

Also if your running in windows mode (only way to Alt-Tab) turning off Full Screen Optimizations won’t do anything correct?

NB: links added at the top in the original post.
…

A quick note to let you know I’ve just posted the following in “My VR Settings - G2”:

NB: although it is not Index or SteamVR related, and I didn’t try some of these findings with the Index yet, it is possible the NVidia CPL Settings, the rationale behind the FS2020 settings change and the workaround to the FS2020 bug affecting motion reprojection (and not just) could be helping flying in VR with the Index with SteamVR Motion Smoothing.

PS: you might not know this but WMR OpenXR preview (v105) includes a new Motion Reprojection mode capable to extrapolating up to 2 frames. This makes it rendering 90fps from 30fps and in practice it is working nicely once you’re working around the limitations (see my post) and you can bear with the artifacts.

Yesterday I’ve posted this in “My VR Settings - G2”:

I’ve been doing some more tests today with the Index and I came to the conclusion the specific NVidia CPL settings which are working better with WMR OpenXR + Motion Reprojection are not helping at all the Index unfortunately, both with and without motion smoothing. Furthermore, I find the SteamVR motion smoothing not working as expected and far less efficient than the WMR equivalent.

However, I’ve been further exploring whether I can push a little further and I’m please to say on my test system, setting the Index at 120Hz is quite better than any other update rate, and with SteamVR linux_v1.14 and the NVidia CPL settings I’m recommending it is further helping smoothing out the overall experience.

NB: it looks to me the headset refresh rate is uncorrelated to the simulator refresh rate when using SteamVR. In other words, it won’t make FS2020 working harder because of the higher headset refresh rate. However, and this is a positive outcome, it looks to me using 120Hz instead of 90hz or 80hz is also reducing juddering a little. I believe the reason is SteamVR projecting more frame at 120Hz therefore making duplicates less visible because they are displaying closer one to the other.

Update: when I say it is reducing juddering, it won’t remove it when looking side ways. However when just rotating the head in the cockpit it is barely noticeable and when translating the head, it is a little bit lower than when using 90hz or 80hz.

It makes sense. I will try to open my mind and get used to juddering instead of reprojection distortion.

To me, the distortion we get from reprojection is ok…I can deal with it. Juddering is very immersion breaking to me at this point. Good thing is that I can put anything on the headset and I wont get any kind of motion sickness. Can go for hours without any problem and getting used to juddering or distortion is easier.

I 100% agree… stuttering is the biggest problem and of course you can’t have a variable frame rate.

Another quick post which will also serve as a repository for the Zendesk ticket I’ll create.

Here are 2 screenshots over Hawaii with the Citation Longitude and the Index. I’ve taken these while holding the headset in my hand and making back and forth left/right quick rotations so as to make FS2020 working harder with the graphics. 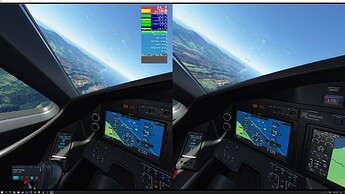 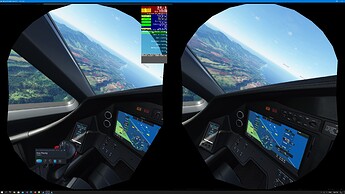 You can clearly see in the bar graph how 1.14 is “stutter free” with an even load over time, whereas 1.15.x is a "stutter mess’ (remember, I was rotating the headset left/right very fast when taking the screenshots).

Furthermore, when using 1.14 it is not even optimizing rendering because it is not using the HAM (Hidden Area Mask), yet it is smoother and stutter free!

Thanks again Capt, not sure if this is correct thread , but since I’m on an index, I’ll ask … how do I see the toolbar (if I want to change weather or time) while in VR.
If I hop out of VR to access toolbar, it seems to mess everything up and I can’t easily go back to VR).

Tab will bring up the menu while your in vr.

I tried different settings during these holidays but this was the most effective tuning I experienced for reducing the stuttering! Thanks a lot!! Previously my scale setting was 78% in Steam and 100% in MSFS. As soon as I increased more than this, the stuttering was too much noticeable even with 30fps and cpu/gpu usage is around 60/65%. Now I can fly even smoother with 100% and 100% in Steam and MSFS (now I can read the most in EFIS even with my HTC Vive

Previous flight sim experience told me that “the best tweak was no tweak” so I was bit skeptical about this change, but this works really great!! So people who are suffering from stuttering even with ok fps, this cloud be something worth trying. Glass cockpit refresh rate = Hight was also another good tip that improved the smoothness.

You might want to read the OP first, it is all explained there…

@CptLucky8 - I would be wary of relying on the in-game stats as a proxy for what is actually being displayed in headset. Instead, I would suggest looking at SteamVR’s performance graphs.

Here are two captures from the same session using the current beta and that temp linux build. 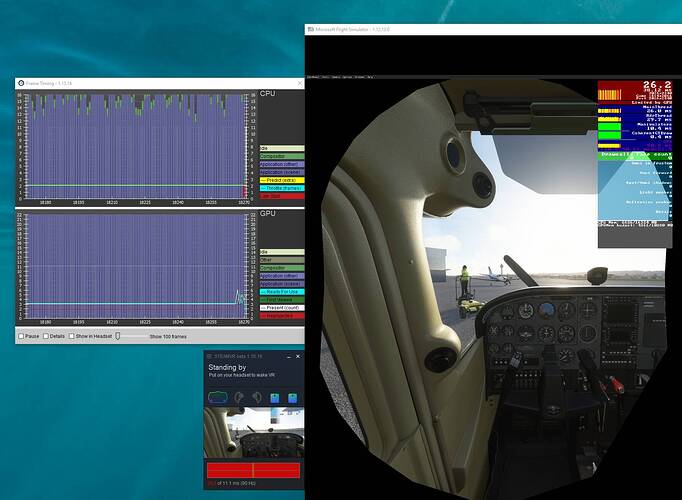 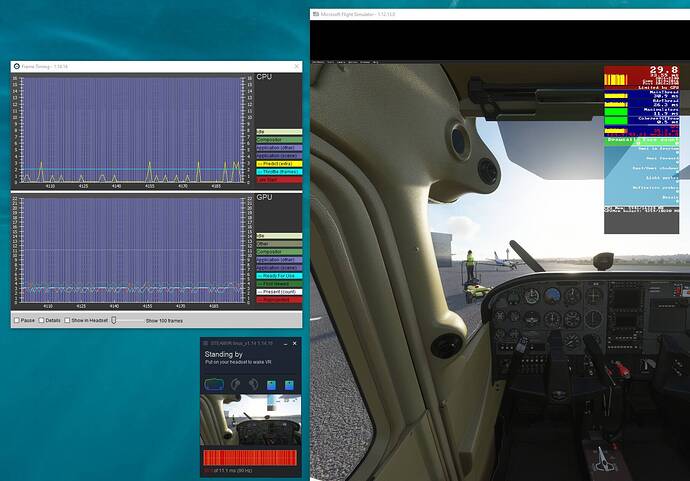 What you’re looking for is nice flat lines which correspond to smooth displayed frame intervals.

In the GPU section of the Frame Timing graph, there is a white line labeled “Present (count)”. This corresponds to the perceived framerate. A value of 3 = 1/3rd framerate, so at 90Hz, this means running at a steady 30 fps, which is what we see in the first image above running the latest version of SteamVR.

On the second image, this value is bouncing between 2 and 3, meaning that the framerate is fluctuating between 30 fps and 45 fps (each image from the sim is being displayed sometimes twice, sometimes three times). Framerate on average is better, but also choppier.

Additionally, there is a green line labeled “First Viewed”. You’ll note that this is fluctuating between 3 and 4 which indicates that there is an extra frame of latency between the sim and display using this version of SteamVR. In the top image, that green line is sitting right above the cyan “Ready For Use” line staying steady at 3.

You may also notice the mini perf graph at the bottom of the SteamVR desktop widget. This is showing what we’ve already seen in Frame Time graph: Red = 1/3rd framerate, Yellow = 1/2 framerate. In the top image we are pretty much solid red, while in the bottom we are fluctuating a bunch. Both of these graphs can be displayed in headset. The Frame Timing graph has a checkbox, and then shows up on the back of your controller, while the mini graph has an option to enable in SteamVR Settings > Developer.

@aleiby These graphs are interesting indeed and I’m using them:
My 2070 SUPER VR settings and suggestions (Index - SteamVR) (post #135)

Please note “Present Count” is not a number but a duration in ms (like most of these values). It is also expected there is a 2 to 3 ms gap on some of these because it is the only way to optimizing the present call (it is explained in length in Alex Vlachos videos - see links and slides in the OP).

In particular look at this:

The yellow line drawn on the CPU graph represents the number of additional vsync intervals ahead the poses provided to the application were predicted in order to accommodate rendering taking more than a single vsync interval to complete. Since these poses are provided to the application before the frame is rendered, this can only be a guess based on prior behavior. Note: A frame will never be displayed before the vsync interval is was predicted to even if it finished rendering in time; this avoids “reverse reprojecting” the frame which can cause judder for animated objects in the scene.

Please note “Present Count” is not a number but a duration in ms (like all these values).

From that SteamVR Frame Timing wiki link (scroll down about 2/3rds of the way):

Again, you want straight horizontal lines for a smooth experience. In the top image (1.15.16) this is staying solid at 2 frames. This is what you’d expect and desire when the app is running at 1/3rd rate - the sim is delivering a new stereo pair of images every three frames*, so since it’s taking two frames longer than normal, you’d want the poses it’s using for rendering to be predicted two additional vsync intervals out.

The bottom image (1.14.16) this value is bouncing around a bunch which will lead to a less smooth experience.

I’m edited my post to say “most of” instead of “all of” and I need to review this once more. I’m not entirely sure what you’re looking for is just “flat is best”. Of course it should be better on principle, Nevertheless, I find 1.14 smoother and delivering more fps in practice. I’d tend to believe if the small variations are still within the frame time budget, this shouldn’t be a problem, but sure enough, it requires deeper analysis. I find the "advanced’ view detailing these value better with additional information not shown here.

TAB is the default key to bring up the menu bar.