Are you saying that by doing so you’re getting throughput sufficient to use Air Link with FS with reasonable results? If yes, can you quantify the transfer rate you’re getting?

OK. so you definately can’t use the OTT settings and then try Airlink.

It needs you to go back to completely to default settings otherwise you will get severe delays.

Airlink was smoothish for VR in MSFS but i think that is more to do with the downscaling from my settings. I did notice tearing in my bottom left eye.

As far as using normal oculus games. Was fine however i still feel VD is doing a better job than airlink for the meantime but very promising over all.

i reset all OTT to default values, and also my Nvidia driver (RTX3070) and its same, even without launching MSFS, the view has a huge latency.
When i check my desktop usage i get this !
CPU is only 60/70% but CGU is 100% 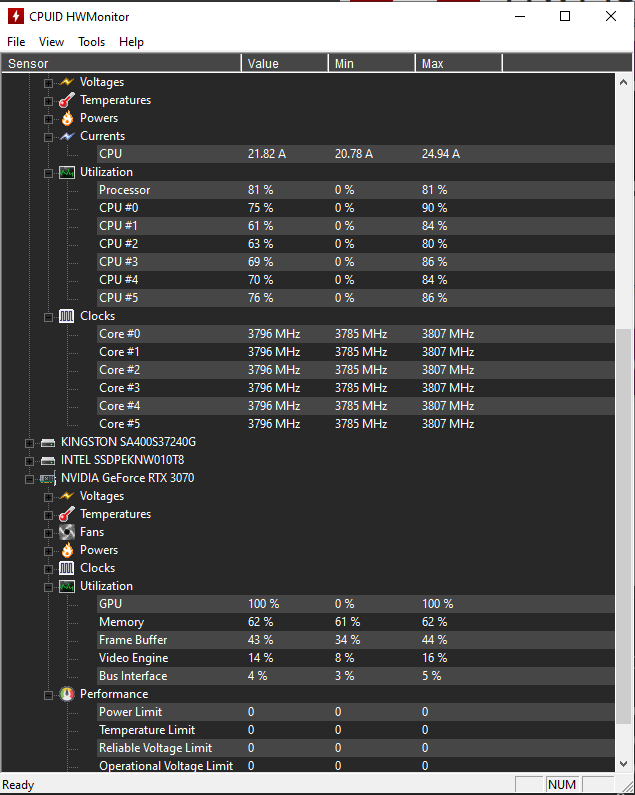 Just downloading V28 now. Interested to try this out…

Also, this looks REALLY promising for the ability to type notes into some kind of VR kneeboard…! I’m assuming it’s only within the quest 2 home, though, not for PC yet… 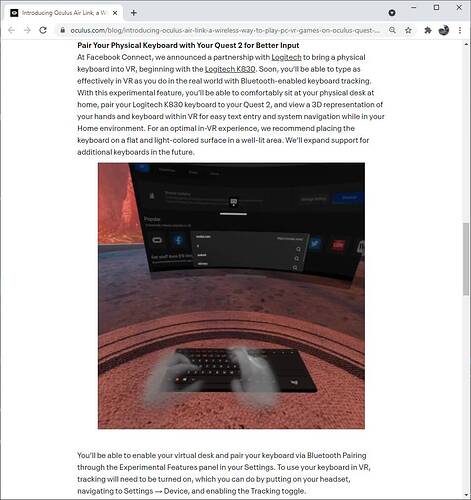 Downloading is for desktop, need also to get v28 on headset (just wait it will come automatically) and then need to wait to get the airlink option on both which pop in after, sometime after…

Airlink seems at least as stable as link was for me, absolutely fine.

Was still able to use debug tool to set FOV 0.8; 0.8, and turn ASW off (gave up on tray tool a week ago, pointless as you have to reset settings each session anyway, and some have said OTT causes them instability).

I tried it without debug settings first, but I was getting the wobbly cockpit I always get with ASW on. Happy to say no issues so far.

Just one flight of course, will test later with a more demanding flight, pop the navigraph window out into oculus VR, etc etc. Will report back.

But so far airlink seems a total winner for me! 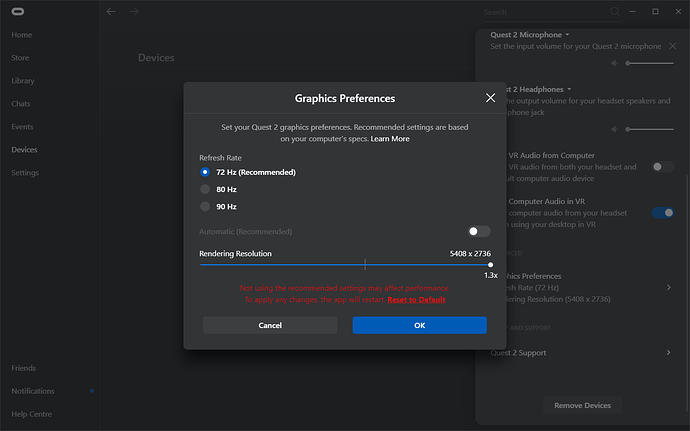 Graphics Settings as per @TonyTazer1504’s thread (these are his screenshots)
EXCEPT that I have TAA @ 100! 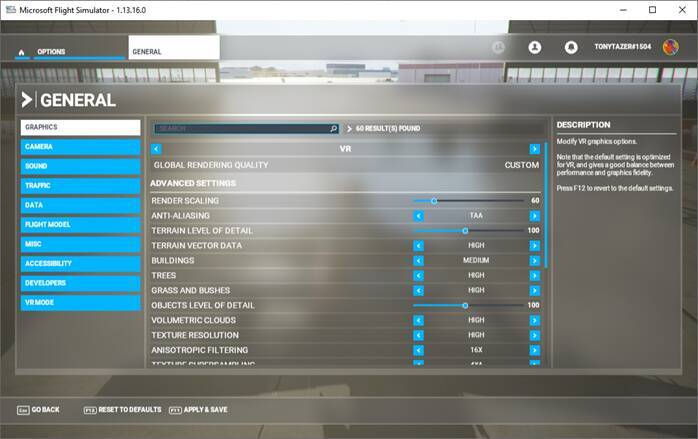 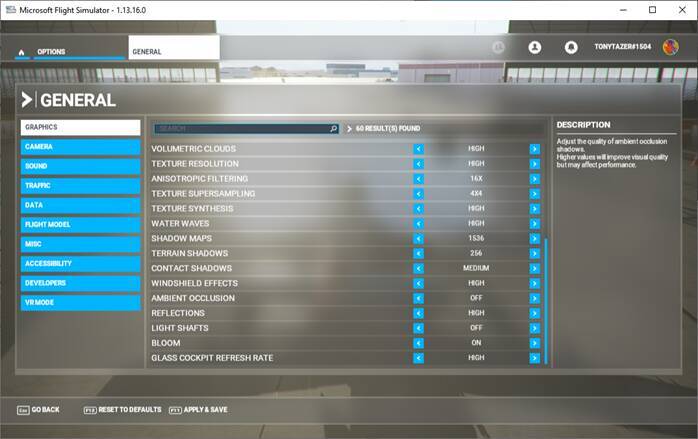 yes, i saw a post on FB with the parameter i had to change, in Debug Tool, the bitrate which was set at 350, i just set it at 0 and now seems excellent !!!

all options in OTT and debug tool reset to default, and super smooth in MSFS

think its better than LINK

Sorry for these first bad tests, but definitely this bitrate limit must be removed ! 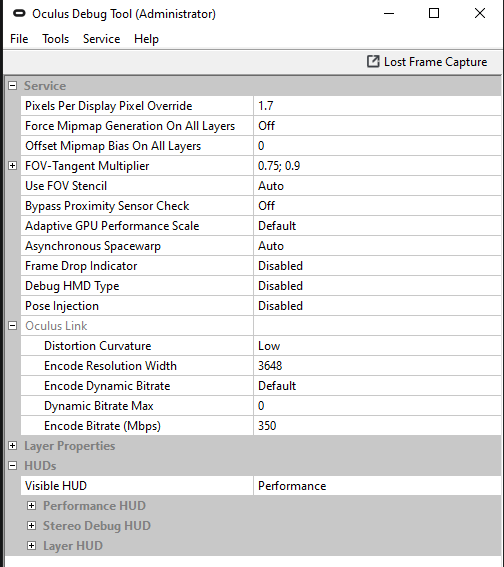 Thats good info to know, thanks!

now, next step will be to learn what are the best settings for airlink, surely we can improve it a lot !

Lets see, for me it seems about the same, maybe a bit more stable.

I’m not going to get my hopes up, but then I have already pushed my settings pretty hard recently as my performance has improved with the last Nvidia driver and FS2020 patches.

How do your settings compare to mine in my post above? Are many of yours higher / lower?

these are the settings i used just now

but i pushed render scaling up to 120 and i got stutters, then i went back to 90 and it was better, some stutters but quite few.

Interesting, those are high!

What is your oculus HZ and render scale set to? 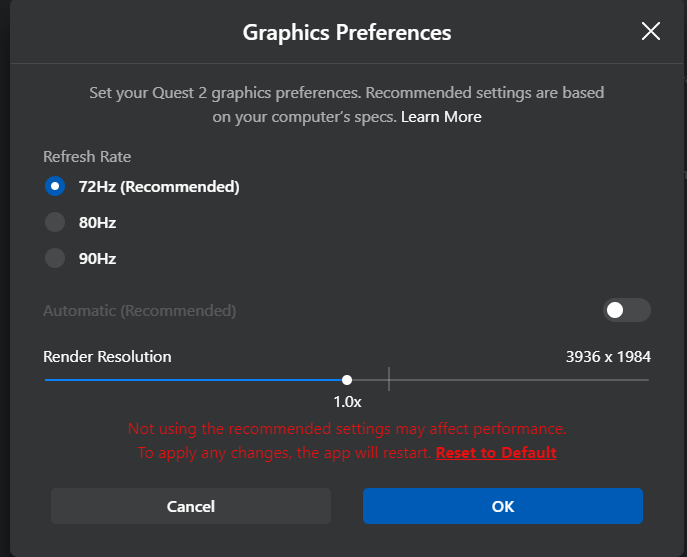 but i will test again at 90hz

I would be really interested to hear if you try all settings as per my post and see how it runs?

I appreciate you have a 2600x so will likely hit the wall sooner, but now I can run max render resolution in oculus and I cant go back from that super sharp image!

EDIT:
I’ve just seen your debug settings with supersampling at 1.7, so perhaps you’re already there or better than my resolution? still, interested to hear your comparisons.

i just tried 90hz but lowered render scaling to 80 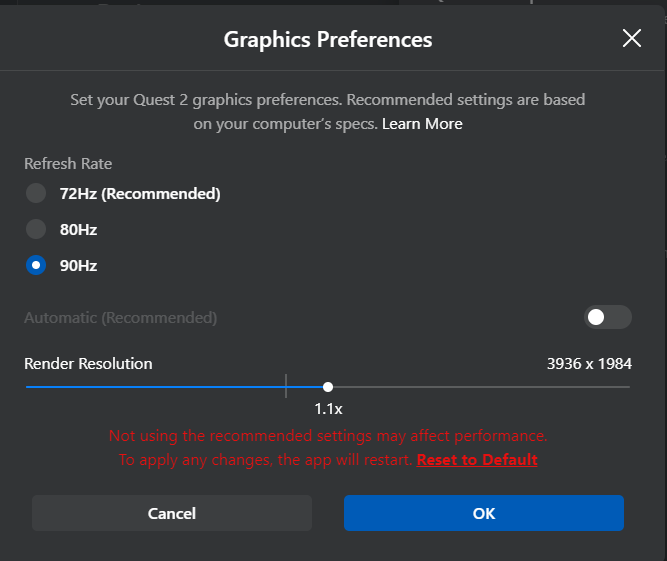 edit : i removed all settings in OTT so now my pixel per display ovveride is at 1, i try to push it at 1.7

Cool, yeah if you’re up for it give all this a try exactly as listed, and let me know how it works out for you.

I found that 2D desktop resolution made very little difference to performance, but helps with the ATC & checklist windows resolution in VR.

Graphics Settings as per @TonyTazer1504’s thread (these are his screenshots)
EXCEPT that I have TAA @ 100!

ok, thanks a lot, i will try this later, but definitely yes, this airlink seems a good tool !
just the same defalut as VD is that the flight deck look a bit dark, more difficult to read instruments than with Link i guess.

Airlink is definitely not any better than usb link for me, and in fact towards the end of my flight this afternoon it started freezing a little, which is new.

So all in all, a nice option to have and if they can improve it from here it’ll be great, but not a game changer for me in any performance sense. Just lovely to do short flights without a cable. Longer flights I still need power, and at least this now means I can use my macbook pro charger which gives the Quest 2 all the juice it needs!

so i didn’t follow exactly, i just apply Oculus parms and OTT, nothing else, i stayed with my settings in MSFS and the flight was quite perfect.
i agree that its very similat to Link, and with link i think that i have a better view of flight deck, need to check.
But anyway its impressive, for a beta solution, its running very nicely.

Glad to hear it works. I am still waiting for activation .I see it on PC, and have activared, but it is not yet on my Quest 2.