Interesting. And only 12 Euros. Judging from the screenshots, it’s well modelled anyway. If the flight model is at all reasonable, I’ll be sorely tempted to buy it. I like oddball aircraft.

For the benefit of anyone who (like me until a few minutes ago) hasn’t heard of the C.430, Wikipedia has a brief article:
https://en.wikipedia.org/wiki/Caudron_C.430_Rafale

Thanks for the head-up.
Not my cup of tea though. It’s really a strange looking thing.
Would love to see some pre-WW2 planes though. I really hope someone will create a Messerschmitt Bf108 Taifun. 4-seater, retractable gear, leading-edge slats, variable-pitch propeller, 12.6 litre V8 with 240hp, top speed 165kts, cruise 140kts, landing speed 46kts, range 550nm, ceiling 20.000ft.
Even 85 years later those are still pretty good specs … 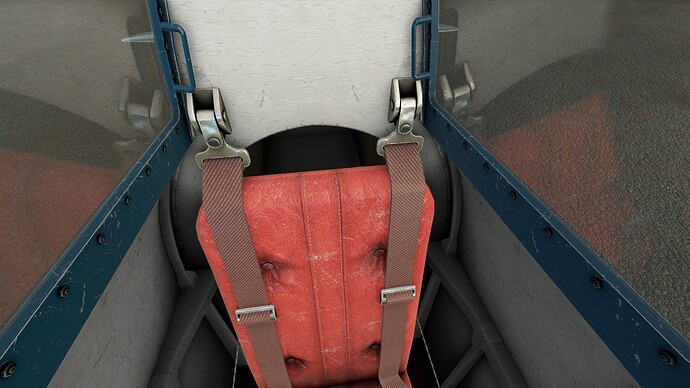 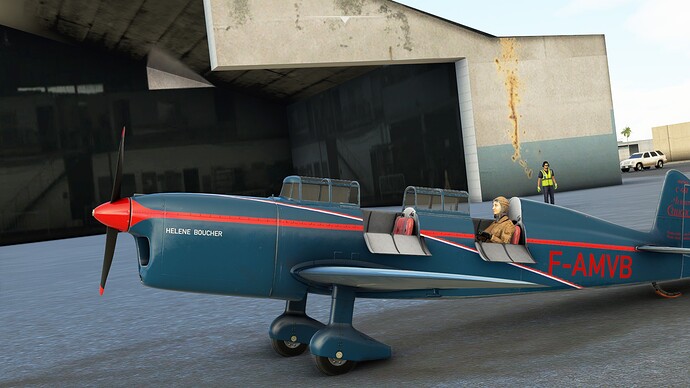 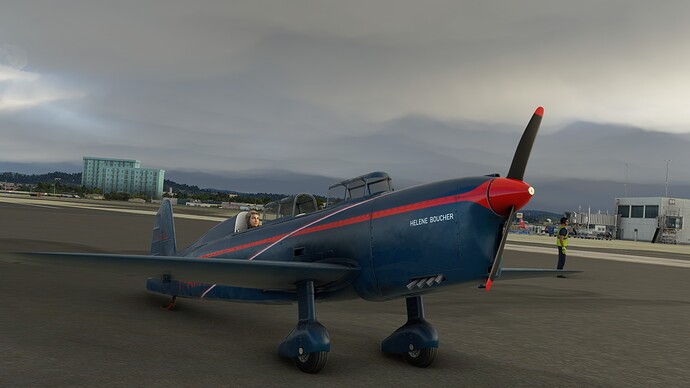 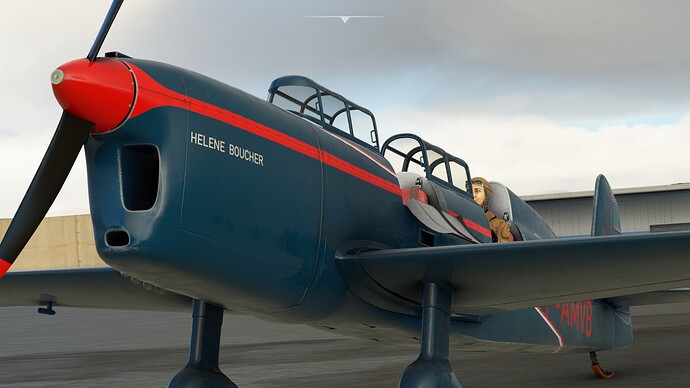 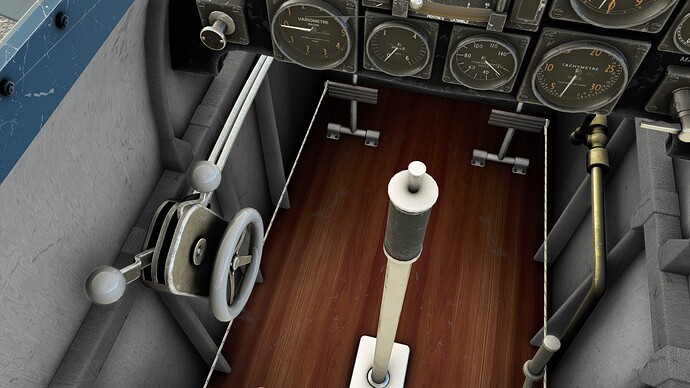 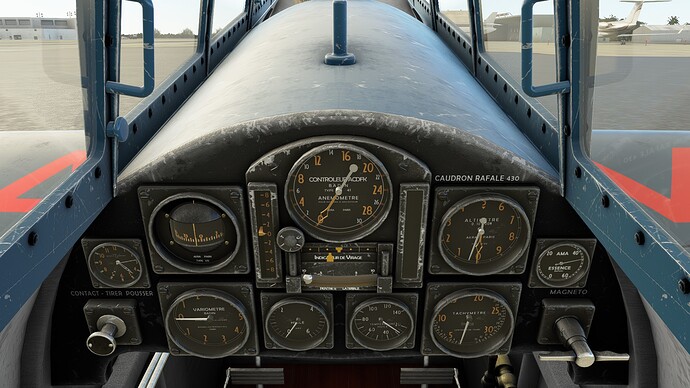 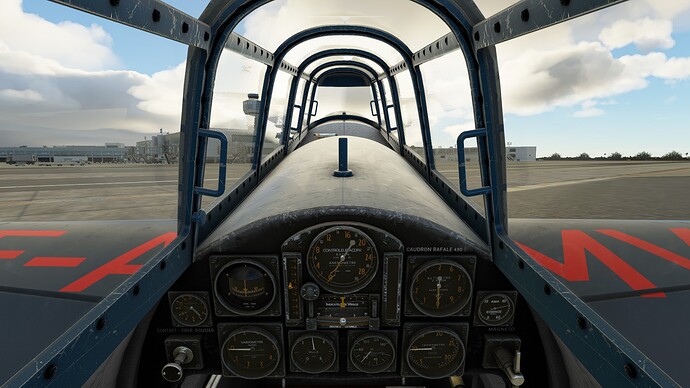 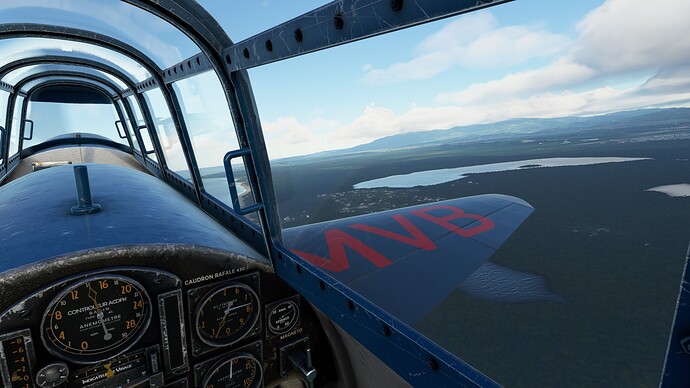 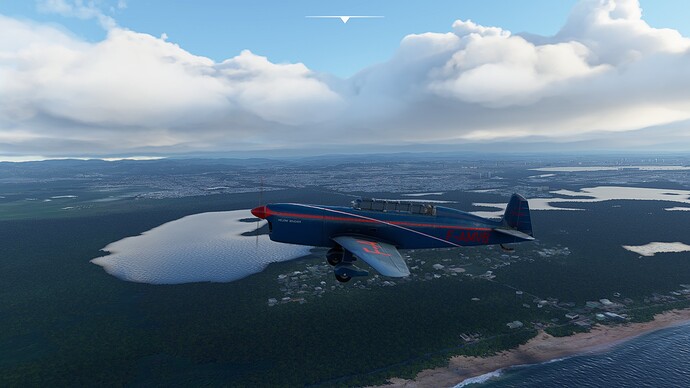 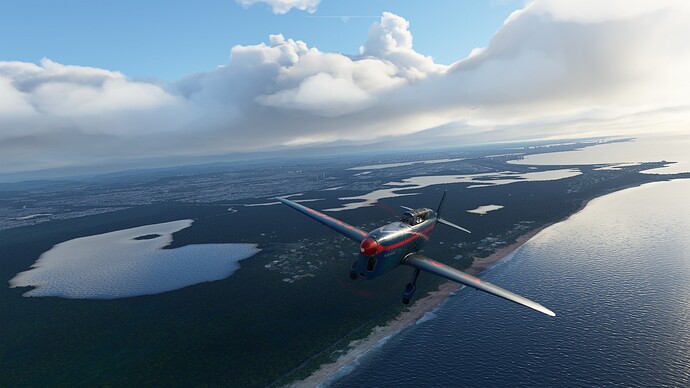 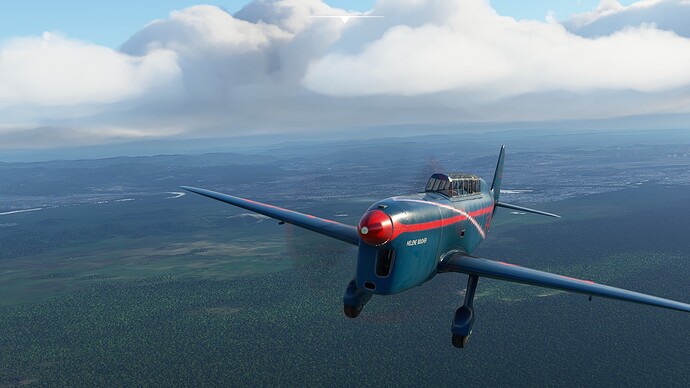 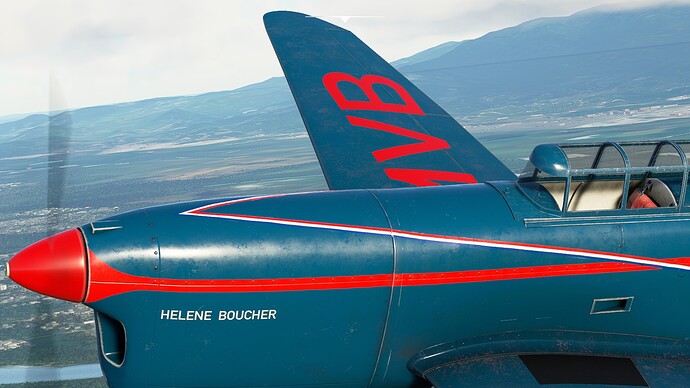 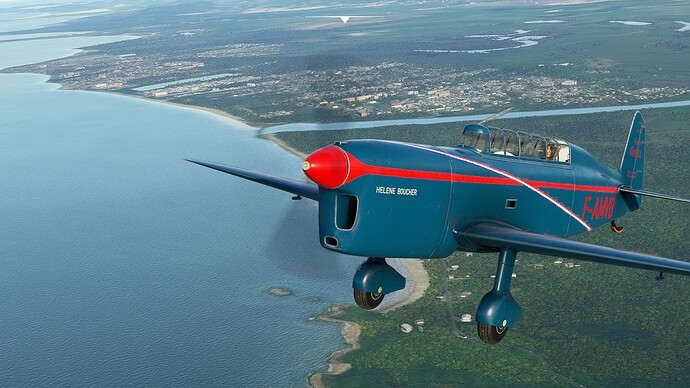 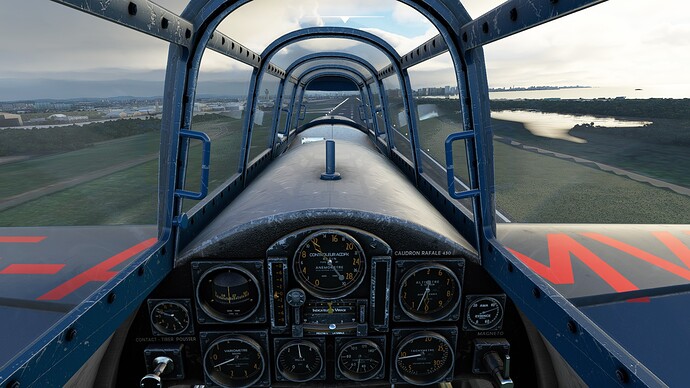 VISUALS:
For the most part, it’s really well-done. It comes with 4 liveries, all of which are same-ish, but that’s fine. Things look pretty good and pretty detailed. BUT… I haven’t tried others but at least on the True French livery, once you look at it from the outside at a certain angle, there will be extreme pixellation of the painted line. You can see that on one of the exterior shots I posted. I don’t know what’s causing it, but I had to do a double-take. Sure enough, if you change the camera angle, it goes away.

SOUNDS:
Engine sounds good… Though no WWise - when you open the canopy, the sound doesn’t change. There also doesn’t seem to be sounds for flaps… or the canopy opening for that matter.

SYSTEMS AND FLYING:
It’s pretty bare-bones. One major issue I have with it is - NO RADIO. Of any kind. It’s impossible to communicate with ATC, for example. Navigationally, all you have is pretty much the compass. Which is fine, but did the aircraft really not have ANY communication equipment?

Parking Brake. It works, but there is nothing in the cockpit that I could find that looks like a parking brake handle or anything.

Manuals: There are none whatsoever that I can find. I know there is a YouTube startup video, but a basic manual would have been nice.

Flying: It’s a medium-difficulty aircraft as far as takeoff and landing goes - your torque is gonna have quite a bit of pull and you have to keep it stable. It’s fun! Overall, it flies nicely, what I would expect, I guess, but without any manual or performance numbers, it’s hard to judge. I could try to dig around the Internet for information, but again, it would have been nice if it was included.

OVERALL:
The price is nice, it’s a very inexpensive aircraft. BUT, it could have spent a LITTLE more time in the oven to get those few details. It has potential if a few of these issues could be rectified. It’s not a bad investment, and it’s a unique aircraft. It certainly feels goofy to fly out of the rear cockpit with that LONG nose there, but that gives it character. If anyone is into quirky aircraft, this is a good buy for the money, but it needs a bit more work for me to REALLY recommend it.

Thank you Jeremy for your review, we will solved all of theses problems

The texture bug is very weird i didn’t have that, about radio, no, there is no radio on this aircraft. For flight performance i will published a detailed pdf of this aircraft. There is a flap sound, but it’s not loud, it’s just mechanical so…

Oh god another 1930s bird! They seem to be coming thick and fast! with the Ryan ST-A Special, Kinner B-2, Grumman Goose and we have the Stearman coming out next month and the Boeing 247 and DC3 in the works. I’m not complaining though as I love this era of flight. Guess I’ll pick this one up as well, the price is nice and it’s a bird I’ve never even heard of before (but it does look interesting and quirky). May there be many more golden era planes to come! I really hope Ant will port his brilliant Tiger Moth to MSFS one day…

I just bought it and I’m mighty impressed, particularly for the money. The visual detail is just stunning in ultrawidescreen, and it’s really cool in VR as well.

I was popping in to point out a couple of things in Jeremy’s comments that needed context, but I see BlueMesh already commented on the radio complaint.

As much as people harp on visuals with MSFS planes (to the point of losing us at least one awesome developer of period planes), I think the opposite should happen here and credit should be given where due: The cockpit is absolutely stunning on this plane, with beautiful, 3D period instruments, great texturing, high poly count… Exterior looks great as well. A bit more paint variety would have been cool, but in reality, there were only two of these things, so BlueMesh has already delivered 200% of reality.

The detail is pretty much unprecedented for a plane in this price range.

@BlueMesh3192, I would love to see a PDF with more details that you’ve gathered! Particularly if you have photos of the interior/exterior of the museum plane. There’s not much detail online about the Caudron outside of Wikipedia, and it’s not covered in my any of my aviation books. Thanks for choosing such an unusual and cool subject.

@Megadyptes7635, yes, I’m excited to see such an influx of 30’s era planes! I was afraid that we’d be deprived after the texture posse ran GAS out of town (they have stated they’re sticking with FSX/P3D and not going to develop for MSFS), but this and the Ryan arriving on the same day were a wonderful surprise! I hope they’re successful enough to encourage development of additional cool niche historical planes.

Good to know about the radios and parking brake.

If that’s the way the aircraft is… keep it that way. I am all for authenticity! I am not familiar with this aircraft, so… I was going in blind. These kinds of things would be really nice to point out in a manual so that more people aren’t confused by the lack of these items…

I guess a fair question is… without radios or anything in terms of navigational equipment, how DID they navigate? How did they land? Also, was this only flown in daytime?

Please do forgive my lack of familiarity with some of the aircraft from this era. I am learning.

No worries, Jeremy. I’d probably be a doctor too if I’d spent half the time that I spent in my youth (and adulthood) reading aviation books reading about medical science instead.

That and building model planes were my primary hobbies in my pre-home-computer youth, so I have an encyclopedic knowledge of aviation trivia that will remain nearly useless until I can retire and become a docent at The Museum of Flight.

Prior to radio become common in the 1930s, airports communicated with planes via light signals – and those planes couldn’t communicate back. Night navigation was via celestial navigation or burning barrels placed along the flight paths of airmail aircraft.

I don’t know the history of this particular plane, but given that it was a dedicated air racer and air racing trainer, I would imagine any non-race flying was done as daytime ferry flights to the next racing destination. VFR daylight only!

Thanks for the heads up and the review @BostonJeremy77 - heading to purchase myself a copy right now - seems this bird offers a very good quality/price ratio and is quite unique.

@Editer thanks, enjoyed reading your insights.

For daytime flights navigation would’ve been done either by following prominent features such as roads, railways or rivers etc or by dead reckoning where you fly along compass points at set speeds whilst keeping track of the time travelled. Oh and sometimes having big arrows painted on the roofs of buildings pointing towards the next airfield lol.

I really recommend the book Wind, Sand and Stars by Antoine de Saint-Exupéry which is a brilliant memoir about 1930s flying across the Sahara and Andes, it’s one of the best books I’ve ever read. Also Fate is the Hunter by Ernest K. Gann which is another memoir also quite well written which covers the author’s experiences of 1930s airmail flights, ww2 trans-atlantic flights and early 50s airliners.

One thing about medical school is for the next few years it’ not like you are ALL SET with reading, cause you still can’t stop keeping yourself updated. If you only knew how many articles I read each month, you’d be surprised how much goes into continuing education for medical professionals.

But anyway, it’s amazing how far aviation has come! To think that at one point burning barrels was a THING? Unreal!

Thank you for the information!

Oh, man Antoine de Saint-Exupery was my favourite author growing up! Cause my dad’s favourite book when HE was growing up was The Little Prince!

I got it because the price is extremely good and I love wacky classic planes. After a few landings, I must say the plane has character and I like it. I have a few questions though.

What is up with the camera system? I would really appreciate the standard camera from Asobo allowing me to set up my own default views (VFR pilot, IFR pilot, and Landing Pilot). Right now there are two forward view cameras and when I try to set them up with default key assignments provided by the sim, they crash my sim (the same happens with BN2 Islander due to their custom camera system).

The second comment is about turning on the ground. The rudder is very sensitive. The plane turn radius is very low, it turns really easily without much power and speed as if it had a free castor tailwheel (like on Spitfire), which it does not. How is it on the real plane, only differential braking? I think I would prefer that.

Overall I like it and I see myself flying this plane quite a bit.

Amen to the Tiger Moth. 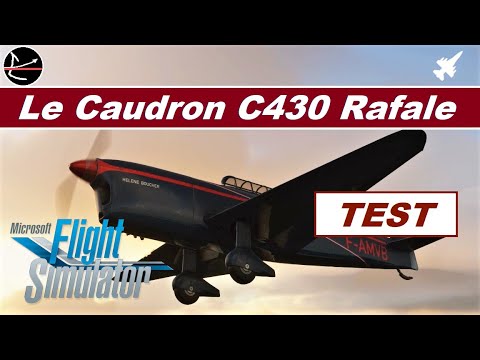 Antoine de Saint-Exupery was my favourite author growing up!

Me too! said the guy with the avatar…

Saint-Ex was flying a later-model Caudron - the Simoun - when he crashed in the Sahara and was nearly lost. The adventure is narrated in Wind, Sand and Stars. He flew another Simoun in the U.S. and Latin America in 1938. It’s a somewhat more refined airplane - a cabin monoplane - but it has a family resemblance to the Rafale.

Which means, of course, that I can’t resist having a Rafale in my hangar…