I just took this out for a first flight looks/feels/flies very nicely.
@BlueMesh3192 There is an annoying click in the audio for the idle running engine loop.

Hopefully this will appear on the marketplace. Very interesting aircraft.

Well it just sounds like a DC offset at the start or end of the loop or something to me. not like hand propping.
If you need help to remove it send me a pm. 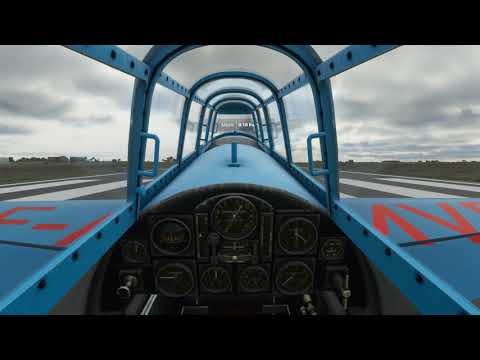 Oh you mean on idle, ok i will see that on wwise.

the is definitily an issue with an audio loop in that, I agree.

I’ve only flown it briefly, but so far I’m loving its Gallic charm and eccentricities. And the cockpit is a work of art.

From the markings, the altimeter looks as if it should be calibrated in metres, but it seems to be measuring feet.

I’m not sure what the variometer is supposed to be measuring, but either way, it hardly seems to move - is it working properly?

I also have possible doubts about the performance, in that it seems reluctant to climb. I wonder if this is a prop pitch issue? From what few sources I can find, C.430s seem to have been fitted with a two-position variable pitch propeller for racing, but the model seems to be fixed pitch. If so, the prop pitch may have been set rather course to achieve top speed, sacrificing acceleration and climb to do so?

There is also a graphics issue, where the lettering on the wings crosses the flaps. In the up position, the letters seem continuous, rather than having a break in them as the underlying structure is shown.

None of these issues are deal-breaking in the slightest. Not at this price, and not while I can enjoy what must have been one of the weirdest forward views in aviation, perhaps only surpassed by poor Charlie Lindbergh’s ‘look through a periscope and hope you see France’ Atlantic crossing experience.

Edit: Scratch the above comments about prop pitch and climb performance. The model does have a variable-pitch propeller of some sort, it just doesn’t seem to have any visible control for it in the cockpit, unless I’ve missed it somewhere. If you’ve mapped controller buttons for normal prop pitch controls in other aircraft, they should work, and presumably the keyboard will too.

Note that it is ‘variable pitch’ not ‘constant speed’. You need to set it at the high RPM/low pitch setting for takeoff and initial climb, and to low RPM/high pitch for max speed in level flight.

From what I can figure out, pitch control is basically two-position, like the real thing. If you run it up to max power on the ground, and adjust the pitch, you can see a dramatic change in RPM.

its on special for 8 euros ,definitly worth it

I read fate is hunter, and will read Wind, sand and stars now as well. Thx for the suggestion.

Fascinating. Looks like the love child of a De Havilland Chipmunk and a Fairey Battle.

The altimeter is marked for meters but it is indeed measuring feet. Same for the VSI, it’s marked “x100 m/min” but reads x1000ft/min. I confirmed this by opening the panel.xml file and found the code stating ft/min.

Just took it out for an hour and a half flight and I’m mostly pleased with it but there are some issues. As noted the altimeter and variometer are measuring feet when the instruments say they are calibrated for metres. Sounds are a bit lacking, engine itself sounds nice but as its using the legacy sound system there’s no switch sounds and the engine sounds the same with the canopy opened or closed, also some weird popping noise at low revs. It doesn’t seem to want to climb much after 3k feet, maybe that’s per spec but wiki does say it should be able to go up a lot higher! Maybe this is due to the mix up with ft and m with the altimeter? Dunno. Took me a while to realise that the pitch is variable, accidentally nudged my prop lever on the throttle and saw the RPM change. There’s no indication of this inside the cockpit, no levers or switches. Fuel tanks seem a bit too large, two tanks at over 100 litres each in the sim, wiki says total fuel should be 160 litres.

So there are some issues but it’s modelled really nicely and I love the cockpit, it has so much character and looks great. It handles quite nicely for the most part. Ground handling is maybe a bit too easy for a tail dragger with a skid, feels like an invisible moveable tail wheel is simulated to make it easier to taxi around or maybe it’s an SDK limitation with tail skids. Take off wasn’t too bad but you will get a big kick to the left when you open her up but nothing too hard to deal with. Stalls seem to be modelled quite well, I did get into a few spins whilst trying out stalls which was nice to see, also you’ll spin if you try to turn too hard. Tried looping but it didn’t go well, I don’t think this plane was designed for much aerobatics, just speed really as it’s incredibly hard to loop without stalling. I flew inverted for a bit and the engine carried on just fine and the plane seemed happy enough, I have no idea if that is realistic, I was expecting the engine to cut whilst flying inverted but perhaps the real plane and engine could handle this? No idea.

But the flaws aside I enjoyed flying this plane. It’s really quite immersive sitting in that cockpit staring down that long greenhouse of a canopy, and the wings look kinda odd from where you’re sitting which gives it an interesting feel but also a great view outside. You can get her up to a decent speed with pitch adjustments and she handles nicely enough. Really good price as well so I’m a lot more forgiving of the faults. I like how the cockpit and door opens but I’d really like to have them controlled separately, seems a bit unsafe to have the door open whilst taxying around! If I could close the door whilst still having the canopy open that’d be really nice.

Oh yeah also the liveries are set to be used by AI planes so you’ll end up seeing these planes parked up at airports which amuses me slightly considering only 2 were ever built lol. I don’t mind it though but I guess some might. Actually another small bug: when you use the raised landing view the view clips through the top of the canopy, might wanna lower it a bit I guess.

Anyway have some screenshots: 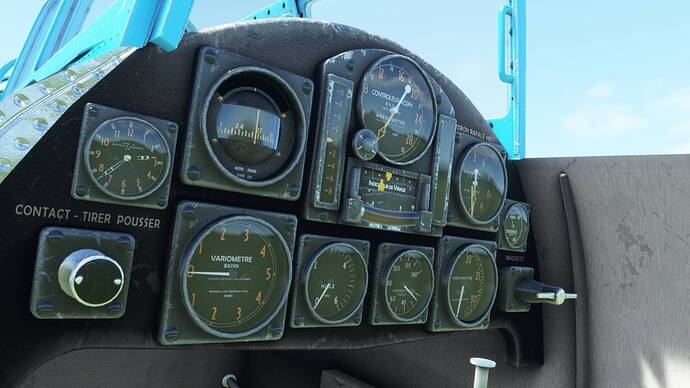 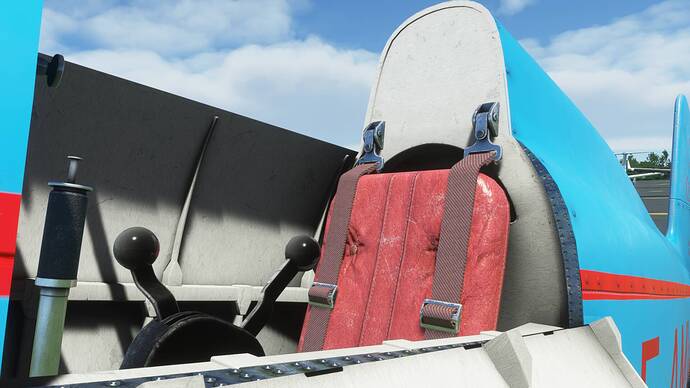 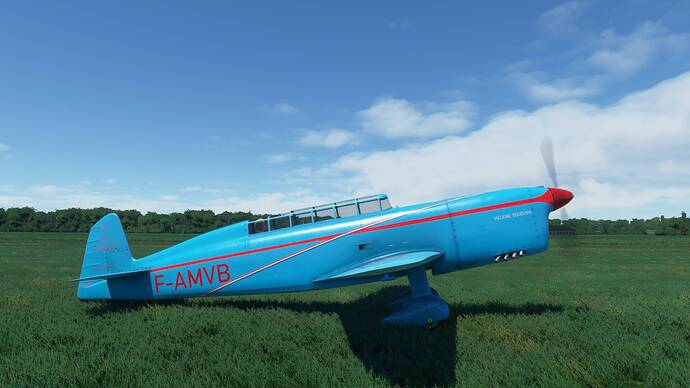 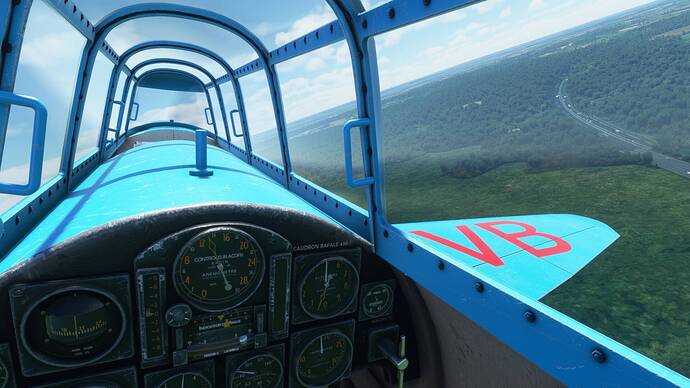 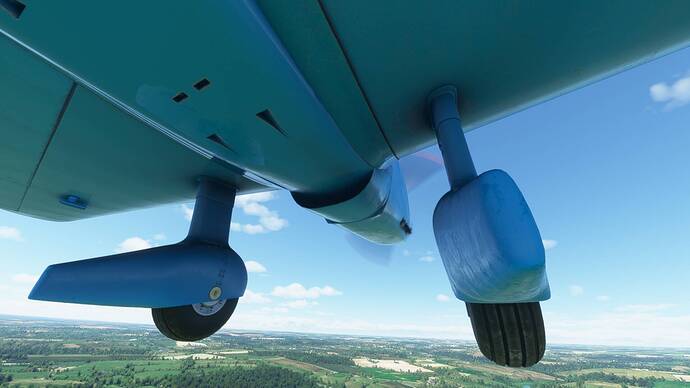 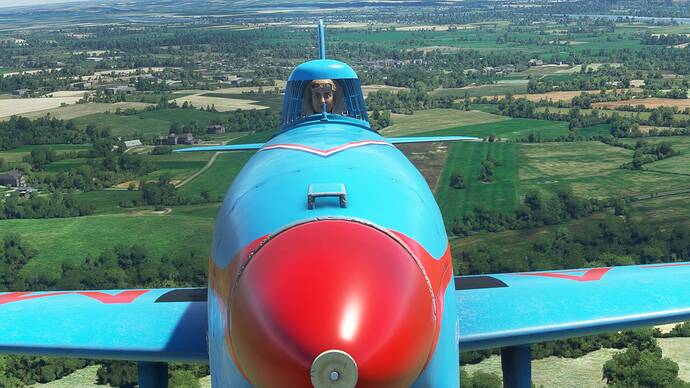 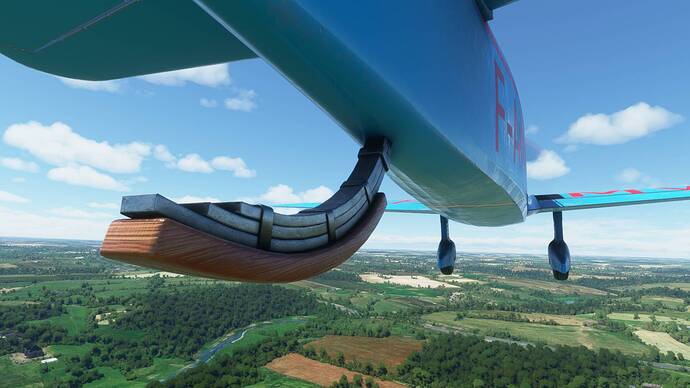 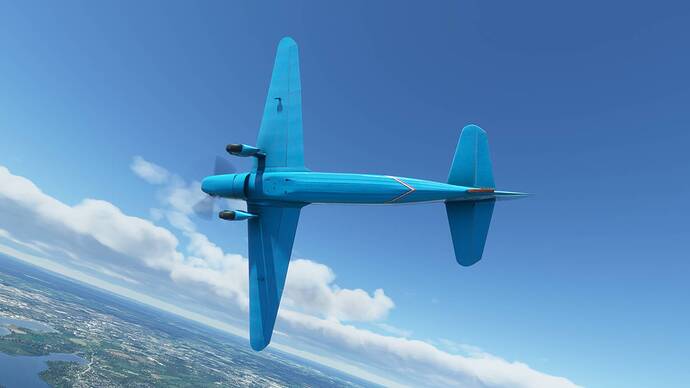 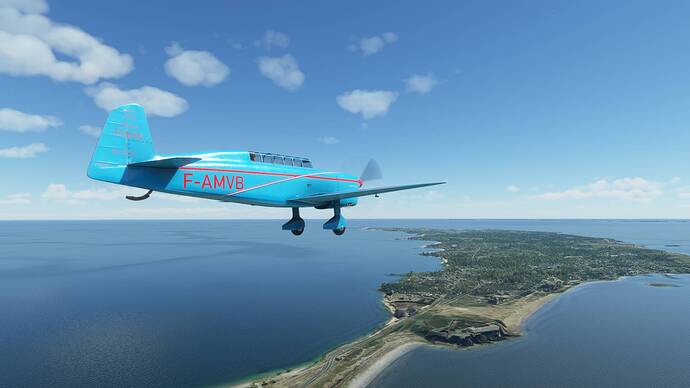 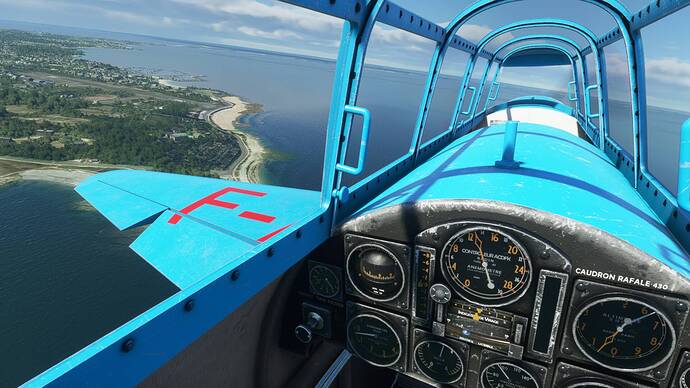 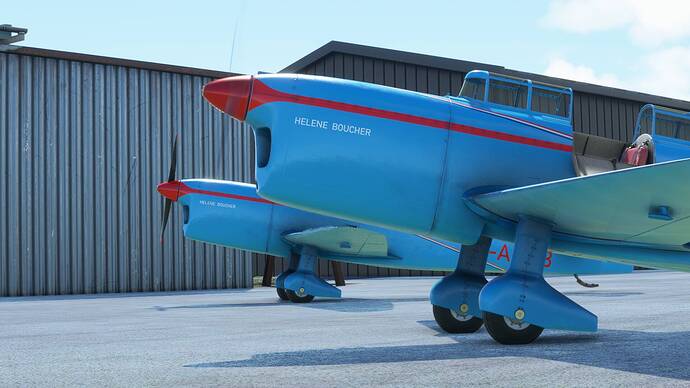 I am preparing the update with a pdf document and the correction of the elements (Altimeter, variometer) I am sincerely sorry to have made this mistake. I will bring you an update very quickly.

I got it up to 10,000 ft without too much trouble, though the rate of climb isn’t exactly stellar. Flying in coarse pitch and full throttle at about 160 km/h indicated, while adjusting mix for max revs as you go seems to do the trick. And keeping the weight down helps. For some reason, MSFS seems to default to adding a 170 lb (invisible) copilot, and 20 lbs of baggage, neither of which will do much for the climb rate.

No need to apologise, even the best developers miss things, and being willing to fix them later is what makes them the best.

Having experimented further, I wonder whether the ‘fine’ prop pitch setting needs adjustment, since I get the impression that it is revs too high, beyond peak engine power revs, even while stationary on the ground? I don’t know how it is supposed to work of course, so it may be correct - I’ll see if I can find any details anywhere. Not a major issue though, as once you figure it out it is flyable enough anyway.

I was flying with full tanks which probably didn’t help things lol. I’ll drain the tanks and kick the passenger out next time and see what I can get up to. The prop pitch settings felt a bit weird to me as well but as I’m not very knowledgable about these things I didn’t mention it.

No need to apologize! It’s a fantastic aircraft and quite unique, a nice departure from all of the normal GA aircraft.

Curious on the prop issue as well – looks like a pitch change availability would be realistic and useful, for those without a full throttle setup with a pitch lever.

Flew it again just have to compliment the cockpit detail! Whoever built and textured this thing did a superb job.

I’ve done a bit of Googling concerning 1930’s Ratier propellers, and it seems that the situation may be a bit more complex than I assumed. Ratier were amongst the first companies to produce a commercially-successful vairable-pitch propeller, and the pace of development during that early period was quite rapid. Ratier (still in the propeller business, as Ratier-Figeac) has an interesting web page on their development history (in French, but Google translate seems to work well enough).

Given the time period, it seems possible that the C.430 could have been fitted with either a mechanically-operated variable-pitch propeller, or possibly with their pneumatically-operated automatic two-position propeller. The latter was an interesting concept in that it was set at fine pitch on the ground, and used an air bladder (previously inflated by a gonfleur d’hélice with a bicycle pump!) to move it to coarse pitch after takeoff - with increasing force on a metal disk mounted on the front being used as the trigger for the pitch transition. Looking at the picture of Helene Boucher’s Rafale from Wikipedia, there does appear to be a disk of some sort on the front of the propeller hub.

Modelling the C.430 with the pneumatic type, if that is what it actually had, would probably be rather tricky though, and might be rather confusing for most simmers. It was entirely automatic, and had no mechanism to return it to fine pitch in the air, which could be hazardous in a go-around situation. I think most people would be happy enough to accept the existing modelling as it is, even if it isn’t entirely correct. Maybe BlueMesh3192 knows more though, and can tell us which type is being modelled. If it is the pneumatic version, that would explain the apparent lack of any pitch control mechanism in the cockpit.

Nice bit of research. I was wondering what this disc thingy was on the nose, looked a bit weird 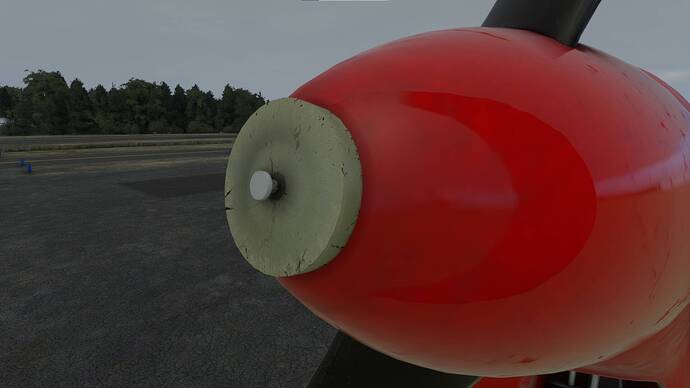 I’m currently doing a spot of flying with only 1/3 full tanks and with no passenger or luggage and I can climb a lot easier now. Dunno why I went with full tanks for my first flight lol. Here we are up at 10k feet 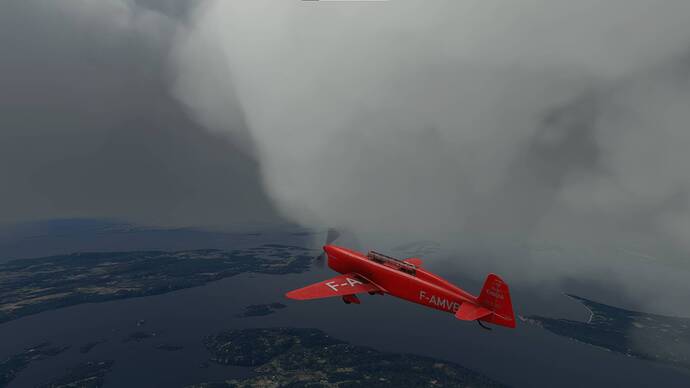 This is what I will explain in the Caudron 430 user manual. It is because of this pneumatic system that Helene Boucher died, on a go-around, the pitch of the propeller did not allow the plane to regain speed, the plane crashed. If we simulate this in flight simulator most of the simmers would complain.Because it would only allow one takeoff and one landing. Without this pneumatic system the piloting is easier and allows to make several stopovers. But there was no lever for the propeller pitch either.