Thank you as well. I know this one is still very much a work in progress for the developers and it may take some time to get it to the level that I am hoping for. You certainly provided me with the insight that I was hoping for and I very much appreciate you taking the time to respond to me.

Looks quite interesting now. PMS50 GPS has been added. Hopefully we will see this in the marketplace soon.

I think the plan is to bring 2.0 to the marketplace. I’ve had the Constellation in the hangar for a while but now the product seems mature enough to warrant some attention.

There are still bugs, mostly little minor things. I can’t find it, but apparently there’s a 0.2.1 release.

Maybe give Sim Market another week or so…

Lots of info on the Red Wing Discord server. There’s a link on their website if interested.

Well, you talked me into the DC-6, I am just waiting to see if this one will be next!

This one is a work in progress. Still needs some work in the Minors - maybe one more season - before it’ll be ready to make an impact in Big League play.

Haha! Thank you. I will be ready when it gets the call.

I certainly wouldn’t fancy being a third party aircraft developer - it’s probably not a good way to make a fortune in the world. Put that with the sheer amount of negative comments they receive on these forums and I think we’re quite lucky to have anyone developing ‘planes for us…

Thank you for the heads up. Will try the new version as it is nearing completion.

Starting to get all the functionality down of this OG Queen of the Skies. Feels good to fly it without having the AI Engineer on.

I hope Xbox version will be arrive soon

Do the engines still run too fast? That’s my biggest complaint with the Connie right now.

No, if you follow the performance charts and set the power correctly it is spot on. Manual is on Red Wings site. Look up your weight, altitude, rpm, and set cruise MP for fuel flow is the way I do it. It is perfect. Even full RPM during landing is right at 140 when configured correctly.

It’s a complicated aircraft so you can’t just give it the beans and reduce to what you think feels right.

Well, after many false starts ending with fatal tail stands just attempting to taxi out, I finally managed to get the Connie into the air. 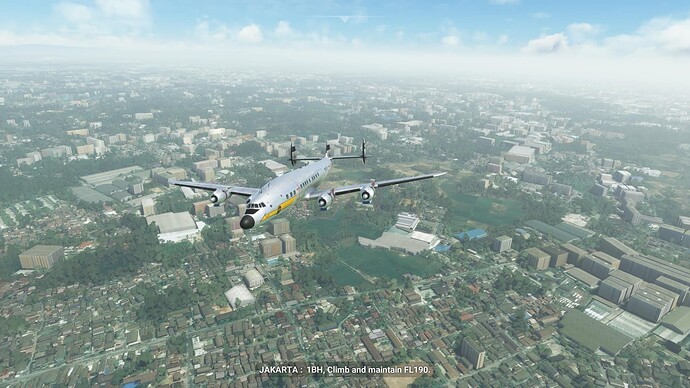 HOWEVER, there are some SERIOUS issues with this plane. I read a long way up this thread from seemingly one of the devs that the Marketplace release would be the fully complete, full-featured, everything-working product, v2.0, so I was waiting for that. Well, it’s definitely v2.0 per the version history (one of the FEW planes with ANYTHING in this text field, so kudos for that) but it’s definitely still NOT a finished product.

So… DO NOT BUY IF YOU WANT A FINISHED PRODUCT because this ain’t. But if you’re OK with some serious problems and/or missing features, go ahead and plunk down your $50 in hopes of better things to come.

There are still 2 MAJOR problems with this plane that both really limit the fun of flying it. 1st and foremost, the high blower setting for the supercharges does NOT work whatsoever. In the Connie, this is supposed to go on at 10,000’ but as I said, it doesn’t work. Thus, you can’t get above about 13,000’.

The other big killer is that the pilot’s throttles do not have any gate or lock you have to overcome to get into reverse pitch. Just pull the throttles back about 75% and you’ve got reverse pitch, ready or not. There is a red lever next to the #4 throttle that I’m assuming is the reverse lock but it’s non-functional. And remember, if you use the AI FE at all (which you realistically must because the pilots’ panel has minimal engine controls and instruments), you have to leave your physical engine controllers alone and at idle. And this idle position that’s not QUITE reverse is rather hard to find as it doesn’t match the detents on my throttle controllers. I STRONGLY recommend that you get this figured out while the plane’s cold and dark. And then let the AI pilot land the thing so you don’t accidentally trigger reverse thrust on final… And I also STRONGLY urge Red Wing to add a gate/lock that must be overcome by a keypress before reverse thrust can happen. You know, kinda like EVERY OTHER PLANE (except the -6 Pax version of the Twotter, I guess).

As to other problems of lesser but still quite annoying import, the zero reader instrument’s display is just a placeholder. It’s supposed to be a CRT version of the CDI you use with VORs/ILSs that can do back courses, and use it for en route VOR-to-VOR navigation, and also make it work from NAV2, and it has built-in missed approach capability. And it’s top center of the panel so obviously was quite important to the real plane. But it just doesn’t exist in the current version. 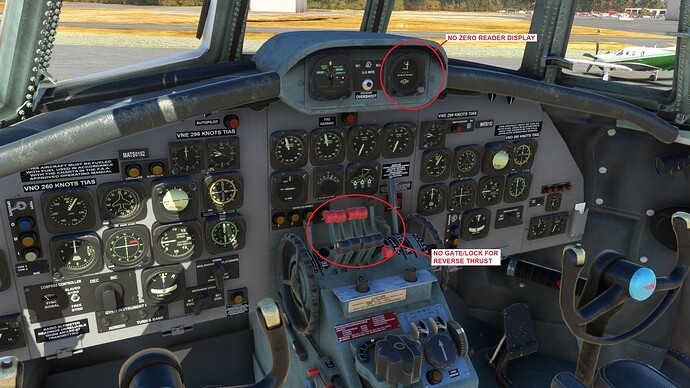 FORTUNATELY, the plane supports the PMS50 GTN650/750 (and thus probably the TDS version as well although I don’t have that). You can have either one alone or both together. The 750 occupies the space that the zero reader display should have. 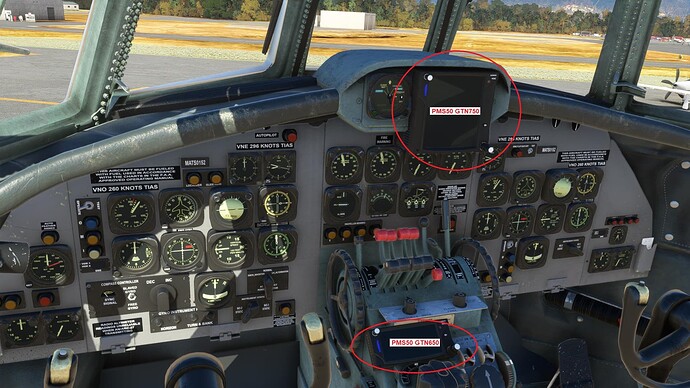 Another irksome thing is that the plane has absolutely NO support for the MSFS checklist system. That whole pop-up is just a blank window. The plane’s clipboard allows you to call up text versions of the checklists but until you memorize where all the switches and buttons are on both pilots’ and the FE’s panels and the overheads and sides of them all, these are pretty useless. So, the only really viable option if you want to get the plane started is to let the AI FE and copilot do all the checklists.

Compare starting the engines to the PMDG DC-6, for example. In the DC-6, you can do it all from the pilot’s seat because there’s no separate FE panel. The (seemingly optional) FE just occupies a folding seat that blocks the aisle allowing egress from the cockpit. But in the Connie, the FE has a panel more complex than those of both pilots’ combined and this contains most of the controls needed to start the engines. Like the engine selector, the primer, and the starter. But the magneto switches are on the central overhead of the cockpit. So the starting procedure is that the FE selects the engine, primes it, and engages the starter… After 6 blades, the pilot on that side of the plane reaches up and a bit behind him and cranks the appropriate magneto switch from “off” to “both”, thereby firing off the engine, all while looking over his shoulder out the side window to see what the engine was actually doing. IOW, the copilot helped start 3 and 4 while the pilot helped start 2 and 1, in that order. It’s possible, but not really practical, to do all this yourself. Best hand at least the FE’s part in the process over to the AI.

The FE’s panel (which has upper, lower, desktop, and 2 side subpanels) is something that deserves its own manual. I mean, amongst other things, it can pull up an “EKG” on any engine and even specific cylinders thereof, and you almost need a PhD to understand what you see. Plus lots of paper charts (static or dynamic) and notebooks to reference. And the whole rather complex fuel tank system to manage. And that’s all good. You can, for example, play as the FE while letting the AI fly the plane. That’s rather a new experience.

But the devil is in the details. As mentioned above, several rather important things don’t work at all at present and most of the rest is rather obscure. Expect a lot of blood, sweat, and tears.

The plane comes with 3 liveries: MATS (WW2-1966 USAF/USN predecessor to USAF’s MAC replacing the Breitling), Air France, and TWA. All differ in external and internal aspects… The MATS version seems the best both inside and out, and also has 3 interior configurations (pax, cargo, and “litter” aka stretcher cases). It also has the Breitling tail number embossed in 3D on the outer fins, which I suppose is intentional. 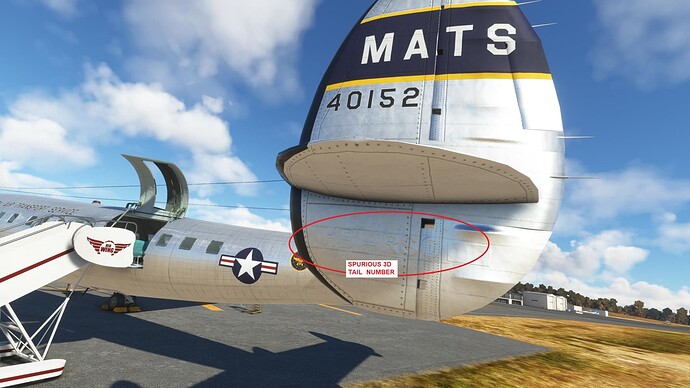 The Air France version is a standard airliner and the TWA has tip tanks for extra range but they’re non-functional at present. The Air France panels are largely in French but the mouse-over tool tips are in English (although sometimes cryptic). Both it and the TWA could use some higher-res, less-saturated interior textures and also, as both are painted, some toning down of the panel lines and rivets, which look good on the largely bare metal MATS version.

And finally, the weather radar and HF Loran systems ain’t working at all as far as I can tell.

I’m guessing it’s not coming to Xbox as originally planned? It saw it in this past weeks Marketplace Update as “Updated on PC”, but misread it as “New on Xbox” and almost jumped out of my seat.

The devs are very responsive to bug report and suggestions on their discord channel. Perhaps you should contact them there?

Check out the RedWing simulation community on Discord - hang out with 952 other members and enjoy free voice and text chat.

I would have to disagree with what some people are saying. I have had none of the experiences with reverse thrusters, but I do use a throttle quadrant that when you come to idle you click down past to engage and then push forward to use the thrusters, they work fine for me. Yes, super boost is listed as a work in progress in the manual, but it should still switch over as normal and you do have to lean over 10,000. Auto mixture does not do its thing over that. Look through the manual. It is a big one.

I have found that is you set the settings from climb and cruise for your weight and fuel flow to get manifold pressure it works awesome. Here is a video of me flying it with no AI or help from Engineers or others. It is a quick flight from KSBA to KBUR. I will do some of TWA’s historic routes to test out how well it does on longer flight. I bought the actual release on the marketplace the day it came out and have been learning how to fly it. Still getting all the nuances down but it is an older aircraft with a lot of complexity. IRL, it took 4 people to fly this thing so there is a lot of moving around and remembering views/where switches are.

Please enjoy the full flight video where I start cold and dark, tune a VOR/ILS flight and how to use the Auto Pilot. Once I do a longer high-altitude flight, I will post that for getting over 10,000ft and more of a cross country flight. 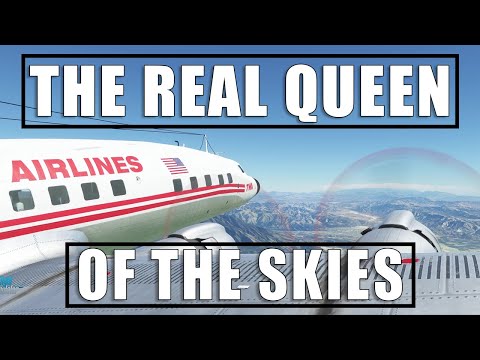