I’m not sure why an Nvidia driver would effect their release date for a World Update. So I’m going with a typo.

The text version of the Roadmap still says 9/27 either way.

Well large chunks of people are waiting for it so will be highly distracted and fiddling about with driver and dx12 and testing their systems with it and SU10. They’ll all be ready for a world update by Thursday. 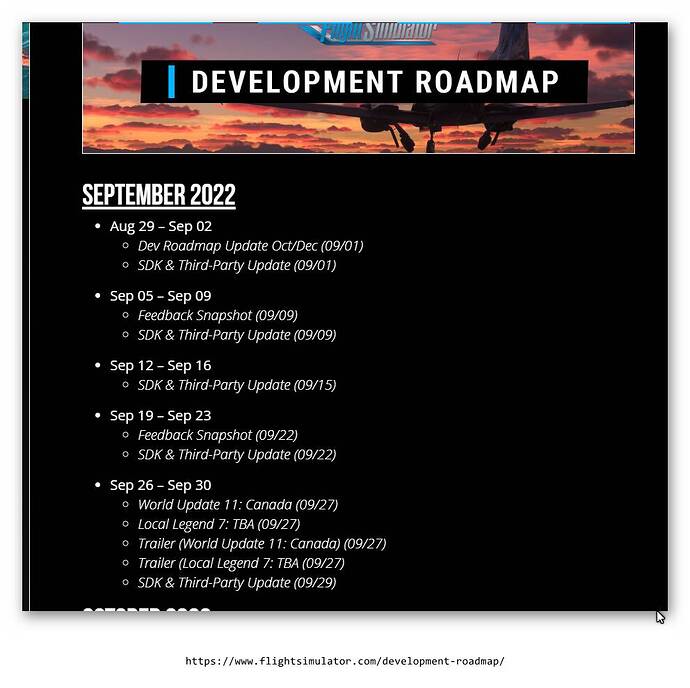 CYYC need to be worked on. I hope they do it, great airport to fly in and out of but currently is just in shambles.

@Paco572 I am patiently waiting for someone to do CYYC. The airport is just shambles and would love to see it updated. FSimStudios I know are working on it, but do not have a release date and are targeting an end of the year. Such a great airport to fly in and out of.

CYYC need to be worked on

pretty much every canadian airports do

ORBX usually touches up a lot of airports for Asobo during these World Updates. Not hand crafted level like the featured airports, but improved generics.

They showed us the Handcrafted airports in the last Q&A

They seem to focus on scenic or interesting airports for the handcrafted and leave the major ones to the third party devs.

Will it be glorious and free though?

…Once upon a time.

Loving that it’s Canada. I’m looking forward to it.

I fly in Canada all the time since i live here and the scenery and details are very good already so any update to bridges monuments etc will be greatly appreciated. thanks Asobo!.

the scenery and details are very good already

It depends what areas you fly, really.

There are pockets of excellent high res satellite imagery and excellent photogrammetry. But outside of those areas, it’s pretty hit or miss. Fly around the Toronto area, and it’s gorgeous.

Fly into Eastern Ontario and you have a mashup of summer and winter ground textures intertwined with tiles of super low res imagery. Most of the town of Gananoque is missing since the imagery they have for it is of such poor quality that the Blackshark AI couldn’t generate buildings out of it. It’s just a bunch of empty streets with a few odd building here and there. I know in the CYGK area, the imagery used is up to 10 years old, even though Bing Maps have been updated twice with much higher res imagery (better than Google’s, even ) since the sim launched.

I wish we’d get an update on when the underlying Bing data will be updated overall with the Blackshark AI.

In a Q&A a few months ago, someone asked that, and Jorg seemed confused by the question, suggesting that data was streamed live from Bing so always up to date. I wholeheartedly disagree with his description of how it works. It does NOT pull live from Bing. At all.

And yes, there needs to be a Blackshark AI run on some newer, fresher data, as the stuff in there right now for areas not covered by world updates is potentially ancient and way out of date.

And that said, just because they’re doing Canada doesn’t mean these issues will be addressed. I’d be surprised if they were, in fact. More than likely what we’ll see is they focused on small pockets here and there around major cities and landmarks and called it done.

They are doing CYFB but the north, so far, is total

Hope it’ll be better, but i somehow doubt it

Wow…do we even have twelve cities?