Well, I actually got rid of mine by uninstalling all add-ons and WUs, clearing the rolling cache and resetting it to it’s default 8gb size and reinstalling the WUs and add-ons. No CTDs.

But then again I don’t do flights spanning over several hours.

I don’t fly long flights either and only a few times per week.
But I didn’t change my setup and haven’t experienced a CTD in weeks (although the CTDs didn’t happen very often before).
So my fealing is that they really do work on the stability!

I haven’t had a CTD in several months, personally. As far as I can tell, the only thing significant I changed was changing my DDR4 speeds from 3600 down to 3200, even though I have 32GB of DDR3600 memory.

Of course, Asobo has said for a couple months now that their sim telemetry shows CTD instances dropping as they’ve made changes to address the causes, so maybe it’s a placebo effect. I dunno.

Another trick is to never turn off your PC. I leave mine on all the time with the monitor off and low power settings. As soon as I restart my PC for whatever reason I get a couple of CTD’s before everything works.

Yes. We’d all have second mortgages too

first, im glad the game seems to be running better for you, and congratz on the new gpu

but i have to say, that i run a gtx 1070 8gb and have since the game released
i have had Very few ctd’s (im talking maybe 4-5 since release) and i found the specific addon causing all but one - i know because they where My addons lol (ones i was working on at the time)

the 1 other … who knows, it happened one time i had no ‘wip’ addons and i never got it to repeat so forgot about it other than counting my blessings it wasnt repetitive (i can only imagine how frustrating that could be)

unless the gpu itself was failing, i have to think its more likely a driver conflict or something you got rid of with the upgrade, rather than the gpu card itself - just like in the game its amazing how one thing can be so connected to many other, sometimes seemingly unconnected, things

Sounds like your GTX was not working properly, the BSOD was a good indicator of that so a good move I would say. Nothing wrong with spending money you can afford to spend to get something better.

Yes, FS2020 is sensitive to high Ram speed and sharp timings.
I dont know why, every other Soft/Bench/Stresstest runs without any problem.

Back in the days of SU 5 things were bad. Really bad, with daily CTD.
Lately, my setup is rock stable. No CTD, no unexpected behavior, everything running perfectly smooth.

Welcome to the gang, I’ve just upgraded to a RTX3060 12GB too, though I wasn’t having ctd problems I sure needed the boost coming from a gtx1060 3GB

I really only get CTD’s when my GPU is overclocked at my usual levels, despite the clocks being 100% stable in other games and during stress testing. So I keep my GPU overclocks pretty mild when running MSFS.

Yeah, same here. With my GTX 790ti with 3 GB VRAM I had fairly regular CTDs. I got into the habit of saving a flight every 30 miles or so.

Then I got my hands on a 3080ti and now no more CTDs, no saving of flights anymore

Good for you that it got resolved. My PC seem to be fine up to now but after using the Fenix A320 for a week, I started to get a lot of CTD. Places that use to be fine now becoming an issue or even loading the game. Just so ironic. I then uninstalled it but still getting CTD. I sometimes show missing D drive for my community folder or Orbx Central will show no access. Just weird things I have never encounter. LIke having to reboot my PC to just reset everything. I swear I never had to work so hard for a game to just run properly.

It seems to be with only MSFS too. All other games I don’t have this problem. If I haven’t spent so much money on this game I would just call it quits. Oh well might just reinstall everything new form scratch to see it helps.

Try holding the shift key down when you shut down the computer. This will cause it to completely shut down. Then the next time you start the it will be a fresh start. You can also change this in the power settings by turning off Fast Startup. 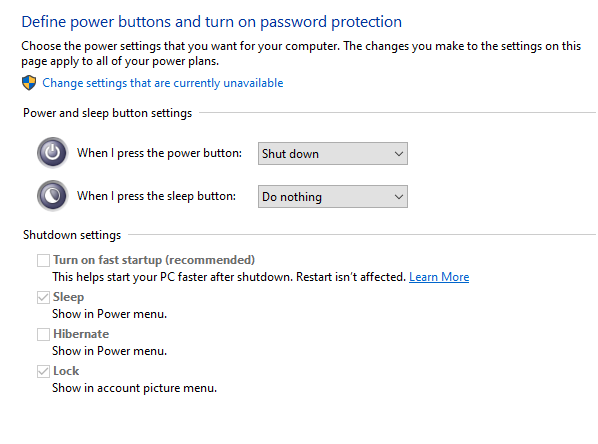 Most problems occur in plug-ins and networks