First appreciate your informaton. I do not do Twitch, just too much work. I watched Video on YT about this, awaiting the F-18, not sure about the rest of the stuff. My hope is, along with this nice christmas present from Asobo/MS, the game will get some fixes as well. Again, thank you for the information. I watched parts of the YT session, very nice of them to give us all this stuff for free, and hats off to MS/Asobo for this nice gift.
Countdown to 11-18-2021, 17 days left. Got to remember to clear community folder it’s starting to get croweded.

You think they will have radar on it or not

I just want say that the name is correct and it is well done with a hard work to go for excelent game.
I am very happy with the improvements month after month!
Well done team MFS!

I do not think there will be functional radar. But instead of guessing and hyping lets just wait and see when it is out.

Why implement it if it has no function? What are we testing in dx12 without function?`Is it that the code should work in both versions first and then they completly change the code to have dx12 features? Good that we can choose to have it on and off though

What are we testing in dx12 without function?

We’ll be testing stability more than anything. There will most definitely be a lot of background code changes to work with the native DX12 API. We’re going to be debugging that. There just won’t likely be much, if anything, that uses the new functionality or features of DX12 in this initial release.

Thank you! We can still hope that it makes more use of our cores?

At which time (GMT) will the GOTY edition be available for download?
And will there will be a rolling release starting with Kiribati, as with the base game last year?
Thanks.

Thank you! We can still hope that it makes more use of our cores?

If there’s any improvement, it will be bonus. I honestly don’t expect to see any difference. And the fact the devs have been saying that on repeat for months now leads me to believe this is the case. There are a lot of folks with some really high and unrealistic expectations who are going to be horribly angry and disappointed when all they see no improvement and potentially less stability.

Yes, i do not have that high expectations either. Only that it would be good to see some improvements. If it’s not i will run on it and if i run on any issues i will report them and then swtich to the dx11 again. I’m totally fine with the performance as it is already. Only the real CPU load on ground that makes it hard to have terrain LOD any higher than 150 from me.

Thank you! I know that now

If it’s worse i will change to dx11 again and report the issues.

Keep it that way

I only hope for a better weather injection( I really wanna suffer from low visibility at EDDM) and removal of sepia mask at high altitudes.

I’m quite happy with the performenca of the sim. No CTD, no stutterings whatsoever.

Let’s hope that everyone is satisfied

I only hope for a better weather injection

Well that’s one of the promised updates for SU7. It should be a rather major overhaul of the weather forecasting / reporting at the very least. How well it will work remains to be seen. I’m hopeful, but not getting myself to excited.

I am also looking forward to the weather improvements. That’s the thing i look forward to the most. We already know there will be improvements but not what type of improvements more than that it will blend better between metoblue and metar and what that means remain to be seen. Maybe it’s only that. I hope that gusts are more implemented and injected properly in SU7. Now we can’t barely notice them. Mostly calm winds over the runway when i land even if the winds are strong. The visibility is also much important feature. But i don’t expecting to much though. I have learned that by all of the updates until now to not be 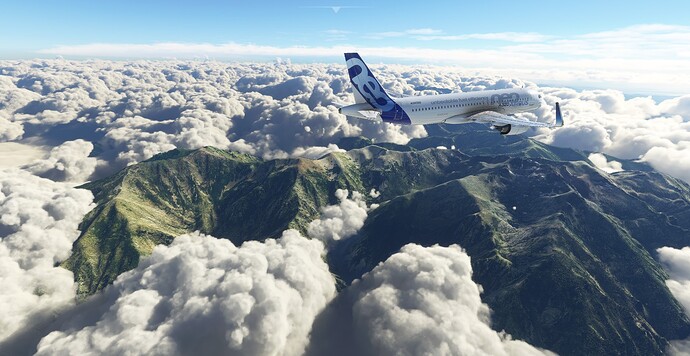 I don’t realistically see it being anything other than what they have already discussed in the Q&As, which was the better alignment with the METAR and MeteoBleu around airports. Not necessarily an easy one to implement, so it will not likely be working everywhere all the time as we might expect.