After the SU5 and a bit of nervousness and anger because of CTD and co., now after the release of 2 hotfixes, and big problems that are solved with this 2 patches, it’s time to enjoy the flight!

Whether VFR with a short flight from Courchevel a Meribel, or a long IFR flight, from KLAX to KJFK, whether in sunny weather of Okavango Delta, or cold snowy weather in Alaska and white surroundings in Aspen, everything is ready for the only on flight, and not on FPS and co concentrate and enjoy it!

And the initial load time from hitting the MSFS 2020 Button is still 20-30 Minutes.

On my system, my timings are…

Mayeb you weren’t paying attention? It was a 464Mb update through the store (unless you have Steam of course, and Steam would update automtaically anyway).

You’ll also see all the other people on this forum commenting on the changes, posting videos and screenshots…or are we part of the Placebo Conspiracy too?

I still need to make switch to “LOW-END” and then back to “ULTRA” to really have the ULTRA graphics configuration set.

I’ve only been able to recreate this issue at one airport. Can you post “pseudo ultra” and “real ultra” screenshots at some other airports so I can test this further? I believe this is a glitch at EGNX only, but if you’ve got other locations to try, that would be great to see

An instable overclock of the cpu Leads to a crash to boot and not to a CTD. I’ve done a lot of overclocking and undervolting with all games and had never a problem. Of course you need to run a heavy load for a number of time to confirm your settings.

The best experience in MSFS can still only be achieved with a CPU overclocking.

Using our test rig, we work out the best CPUs, GPUs, RAM speed & memory configurations to get the most performance out of MS Flight Simulator 2020.

So you didn’t look at the pic I posted earlier showing the sim using more than xbox resources then? 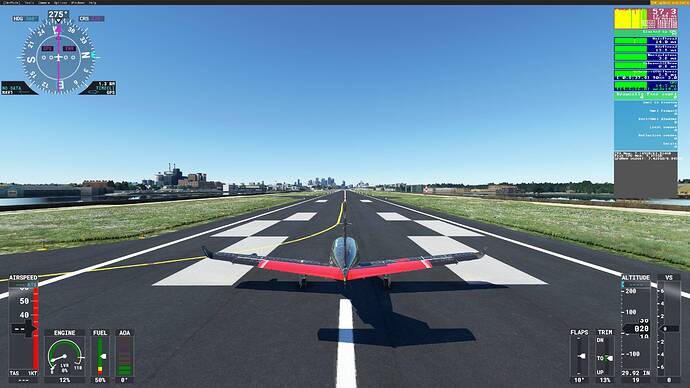 I appreciate the help from everyone hunting bugs and providing workarounds or solutions. Unfortunately I don’t have time for that - as a family man with two toddlers, my free time for any kind of recreational activity is very limited. I have been lucky so far and was able to use the sim with stable 50fps in most of places, without issues and any CTDs. This update and the hot fixes caused a lot of problems for me, and the “recreational value” of MSFS in this state is close to zero for me. I simply don’t have time to spend hours to read forums to figure out what is broken and what not, trying workarounds, wasting my very limited free time just to get even more frustrated after a long day with work and family. It is just a big no for me.
Once again, thanks for everyone providing ideas and workarounds, see you hopefully in a month or two.

I think you have to distinguish two things: RAM usage was reduced in general and when you use the LOD settings of the XBox, RAM usage will be around what is available on Xbox (which makes sense). If you increase LOD, RAM usage will increase. Which is also no wonder because more scenery is displayed and it has to be somewhere.

The pop-in has to be viewed separately to that! It is present more or less regardless of the LOD setting. It happens because with SU5, part of the scenery that is not visible is not kept in memory all the time. This is certainly part of the memory reduction strategy (though I don’t know how much difference it will make because it’s not like everything has to be reloaded, it’s just parts of it). They already said, that they want to give us an option to have more scenery in memory to reduce/eliminate pop-ins with WU6.

So as always, the truth does not lie in the extremes but in the boring middleground. There is no hard Xbox RAM boundary, but RAM usage was certainly optimized regarding the Xbox specs and it is not possible at the moment to force the sim to store more off-screen scenery in memory.

How can I see if the latest hotfix has been installed? Since the hotfix was released, the simulator has not asked me for any update requests. I have looked in the Steam store and I also do not see how to download it, although it does appear.
And looking for the updates inside the simulator I can’t find it either.
Thanks for the help.

You could read the release notes and check on your own sim. If you can’t find things, then these probably weren’t issues for you anyhow. Hope you’ll enjoy hf#2!

So as always, the truth does not lie in the extremes but in the boring middleground. There is no hard Xbox RAM boundary, but RAM usage was certainly optimized regarding the Xbox specs and it is not possible at the moment to force the sim to store more off-screen scenery in memory.

Yes, completely agree that this is the case. And a good thing in that when they do make available the ability to hold more off screen, there is capacity there to do it.

Yes, some issues were widespread. And because some people documented these issues with pics, specs and such, Asobo was able to pinpoint the cause.
What I am really tired of is the complainers who are only howling with the heard and do not contribute anything but negative emotions, conspiracy talk and are even bashing the developers at times.
Too many of these posts lack the information with which we can help each other to improve or raise an issue.
And also this… still, yes still some people, I don’t know how, don’t seem to know that some add ons are not yet compatible. How is it possible that some still try to fly with Orbx London and complain about ctd?
Simming requires more maintenance than any other game. Every add on adds to this complexity. You have to put in the time and need to have a lot of patience. This maintenance is a hobby in itself when you like it and a pita when not. My advice would then be to fly absolutely vanilla.

Look! This is what I mean. Documented, informative, helpful. Well done!

The mouse look one came with Su5, a little annoyed it’s still around but it’s relatively easy to work around (use mid click toggle freelook). Hopefully it’s not intended behaviour because I agree that would be a terrible idea.

You need to make the config file not read only again

If you have real time traffic on, then toggling this off then back on again may solve this. It has happened to me once, I did that, it fixed it (somehow) and I’ve never had the issue again (all post SU5)

I re-assigned middle-mouse click to reset the camera view. The camera system really went south with SU5 as well. I always end up in weird camera angles and needed a way to reset.

it was mention many times, by some reason msfs use limitation of ram/vram so any relative heavy scenery can and will have this problem, till asobo fix it, i have same trouble… more than 2.0 load melting down all photogrammetry buildings, and i even don’t sure more than 2.0 give big improve, but even with 2.0 i have same stuttering when pan or taxi to the runway or parking, or some time with aggressive horizontal maneuvers… for what this upgrade if any “heavy” addons kicked then sudden on the ground… i love this improvement and sure it’s 10 of 10, but guy, who limits to use ram/vram in the simulator have to be sued for vandalism

In the controls assign the right mouse button to Cockpit Freelook HOLD.
That way you move the cam only when you press and hold the RMB.
Set the same thing for the controller HAT or whatever you use to cockpit look up, down, left, right.
There’'s also an option in camera options under cockpit camera - for the freelook mode to be HOLD (move the cam only when you press and hold) and not TOGGLE (press and you are in the mode in which you move the cam, press again to exit that mode).
Actually there is everything and it works perfectly, just take a look and explore it a little bit.

It is fantastic that they managed to make the sim so stable and not crash the whole Windows and bug the USB motherboard controller - when people make such an agresivne act as to plainly disconnect an input device during the LIVE SIMULATOR session when there are hundreds of complex mappings in the memory interacting with the input device’s drivers. I am honestly amazed it’s just a small 10 second hickup.
Don’t disconnect devices like that. It’s a malpractice.

"…so it seems like I have an issue with some of my input devices or my USB port - also among other things I like to connect and disconnect controllers while the sim is running, so after some time I probably made a mess in Windows and my USB drivers might be severely corrupted. I should check out all these things, I gotta fix my PC so that I don’t have these problems with loading time and the USB subsystem again when I want to play the MSFS."