[image] Screenshot by Parorng (Forum) We are now only two weeks away from the November 11th launch of the 40th Anniversary Edition. This free update comes with a wealth of new features and content, including official support for gliders. To learn more about how we brought these unpowered aircraft to Microsoft Flight Simulator in the most realistic way possible, be sure to watch our new Feature Discovery Series video linked below. This video contains interviews with several Asobo developers as …

The fact that popout window performance is now officially on the to-do list gives me a sliver of hope. What’s currently in SU11 beta is far from what I’d consider fixed, especially compared to how incredible it was in the first SU10 beta, but it’s a step in the right direction.

Asobo, I know you guys are in the process of building an Air Manager cockpit in your office. Rather than making it just a dedicated Robin cockpit, I beg of you to use Air Manager to its full potential and build a generic cockpit that can be adapted to any plane so you can try the the G1000 NXi or GNS bezels and use the popouts for it. You’ll be able to see for yourselves and actually understand what it is that users have been complaining about for 2 years.

Noticed there is an update for Flytampa Vegas. Indicates for both PC & Xbox. I didn’t see an update when I logged into my Xbox. (I did get the update for the a319 & the Kodiak though) So maybe there isn’t an update for Xbox, or it didnt get loaded? What version is the new update? Thx

Didn’t this previously say “helicopters and gliders”? Have helicopters been dropped?

Didn’t this previously say “helicopters and gliders”? Have helicopters been dropped?
[/quote]

Helos thankfully haven’t been dropped; the feature discovery will be released next week.

For several weeks or even months Xbox didn’t get many good GA aircraft if any…
I expected that at least MS/Asobo payware aircraft will get CFD update… but not.

No issues with FlyTampa KLAX or any of their others on PC.

Well nothing but issues on Xbox.
I’d love to know what was updated.
I can only imagine it was tested, approved and got the thumbs up from MS.
What a great job they do with their testing.
So assuring.

I got fly Tampa Vegas for pc and works great

I am still wishing (in vain) for the popouts to include working touch screen enabled bezels.

If we wait for Asobo to do that, we may be waiting a long time.

If you use Popout Manager at the link below, it includes touch to mouse click emulation so you can use your popouts on touch screens. Yet another feature that should be a basic thing in 2020 and beyond that a 3rd party has to bring to the sim because it’s lacking. I use it all the time with the PMS50 GTN and the G3X and it works quite well.

Version 2.0 of this tool allows you to automatically detach and save pop out panel positions for your flight. Please feel free to provide feedback about the usefulness or any issue you encounter regarding this tool. A video demonstrating how this tool work can be found in the “How to Use” section of documentation by visiting GitHub repository link above. Thank you all!

I do already use a bunch of addons to compensate for what MSFS lacks, but if MSFS included these basic functions I would not need most of them. As it is I don’t use the current MSFS popouts at all. I have better alternatives.

I hope they fix this kind of ATC nonsense… 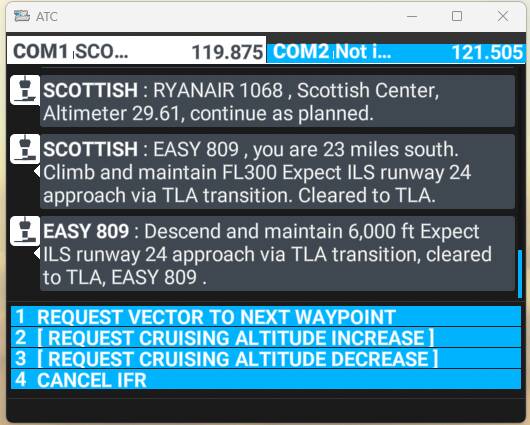 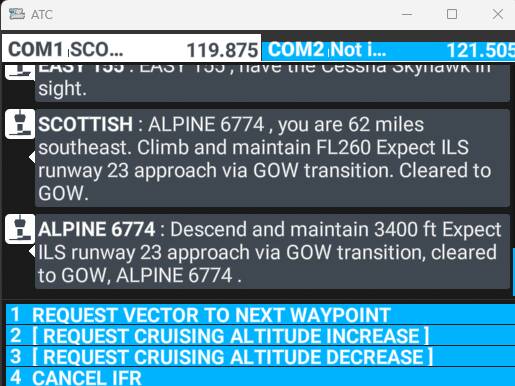 I swear the IFR routes got worse recently. They were pretty good for me pre SU10 for a while but now half the time they’re like this