I’ll be waiting to see what happens with updates before picking this up, to see if what is promised is delivered. Hope to see better sounds for one thing.

In case anyone finds them useful I’ve uploaded some AAO scripts, still a work in progress as not all work yet but the important ones do (or are default sim events). 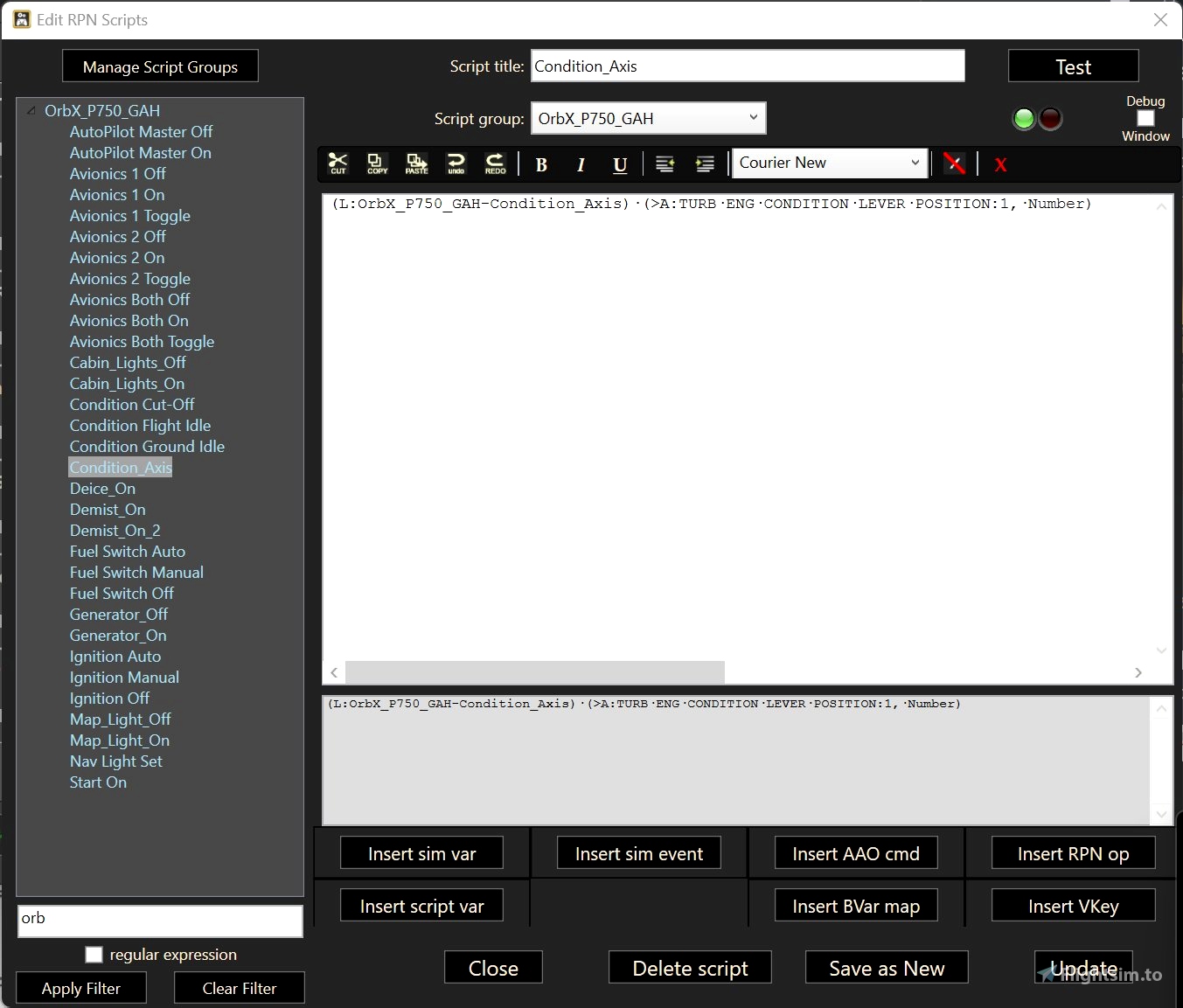 ✓ OrbX Pac750 Axis and Ohs (AAO) Scripts is a Microsoft Flight Simulator 2020 mod created by Burrator. Download for free to enhance your experience in MSFS 2020.

I think it’s a very solid package for the price already to be fair. Sure it would be nice to have more (of course) but I really like this as it is. Any further content would just be the cherry on the cake and really elevate it to one of the best Payware planes available and a total “must have” but let’s see.

There are a lot of nice touches to it that make it interesting and somewhat unique to fly.

I actually like the instrumentation. Once you get used to it, it’s fast to scan-read and see when something needs attention. I like the bottom left (left of the FO’s yoke) there are needles for each of the control surface trim positions. Never seen that in any other aircraft before and it makes such good sense I wonder why!?

It can do some extreme moves for a plane of this type which are really satisfying and it can slow down like nothing else (maybe the Porter can match it in this regard). It’s polished, has every feature I want (STOL, reverse thrust, analogue, modern, agile, good visibility, good cockpit view presets, decent enough sound, top quality modelling and textures, good selection of liveries) and some nice extra touches with the different animations for the specific variants.

Honestly I think if you wait and wait for something that may not happen and miss out it would be a shame if you’re even half looking at it now. Also if more people buy it they’ll be more incentivised to keep working on it.

Curious if someone would be able to make a less visible propdisk for this thing.

To each their own I guess, but I actually kind of like the visible prop disc because it’s a constant reminder that you have that giant thing sitting out in front of you, unlike in some other planes where you could sometimes forget it’s even there. Maybe that’s true to life but overall I prefer being able to see it periodically.

Also agree with Baracus250’s assessment above, I waited till just a few days ago after watching it since release, trying to convince myself to finally pick it up, and now I’m regretting waiting so long. I think its relative obscurity, presumably at least outside of New Zealand, has probably dampened the amount of discussion and purchases of it, but once you start reading about it and watching videos, it’s really a quite cool little ugly duckling.

but once you start reading about it and watching videos, it’s really a quite cool little ugly duckling.

It’s so ugly that it’s one of the coolest planes I’ve ever seen - but please, finally give it its own and correct sound…

Coming in a future update.

Just got this bird and getting acquainted. but is it just me or do a lot of the switches on the panel not actually switch? i thought i was going crazy but some definitely move and some dont?

UPDATE: reloading the bird after first use seemed to have fixed most of the issues

Have you managed to get the alt sel to work. I thought VS was supposed to stop when the alt sel value was reached. But not for me!

Im getting that problem in a lot of aircraft in my community folder, hopping its fixed in next update

i ran into the same problem when loading a different verson (skydive). except this time a simple reload didn’t work. had to totally exit the sim

Really love this plane! Has a very realistic flight ‘feel’, for me. A decent soundpack would be good. Has very similar mission profiles to the Caravan, but for me more realistic. The steam gauge mod of the Caravan is pretty, but the flight model doesn’t do it for me. With this plane you basically get a more realistic Caravan, with added bonus of pure STOL. Top marks from me!

And a low wing, which is atypical for STOL planes. Lots of fun!

Proper engine sounds are meant to be coming.

Autopilot now not working. I think it has something to do with the latest GNS530 update in the marketplace. I’m about to remove it and see what happens

The AP issue is caused by the latest GNS530/430 marketplace update. I deleted that and autopilot works

I am new to the PAC 750 and I am enjoying it a lot! Finally a low wing XSTOL.

Questions about fuel that I didn’t find in the Doc:

Is there no way to change tanks? I don’t see any switches and somebody said it is automatic - it empties the rear tanks first then the front.

The left rear tank always empties faster than the right rear and I end up with a huge imbalance. Right now, my left rear has 4 gallons and my right rear has 33 gallons. Is there nothing I can do?

great plane (agreed) but there are a couple small things that need fixing. the fuel issue you’re experiencing is one that happens to me as well. i had created a support ticket asking about it a while back and the response i received said the dev is aware of it and working on a fix

It’s kind of a significant issue to me. The airplane’s range is the distance you can fly on the left rear tank, it seems. (deleted a comment above climbing to altitude - I see in the manual in doesn’t climb well above 12000’).

Addendum: I am finishing a 3 hour flight and it uses both the left and right rear tanks but nothing at all from the front tanks. It uses the left rear slightly faster (54%/46%).