Are you using Developer Mode or made changes in it?
No, I’m not, I didn’t.

Brief description of the issue:
Every so often I see taildragger aircraft standing like this on the ramp. That Piper just stands there with its engine off and tail in the air. Taildraggers and sometimes nosewheel aircraft trying to taxi fall over and stay forever like this with its engine running.

Provide Screenshot(s)/video(s) of the issue encountered:
See below + videos and more in the thread

Detail steps to reproduce the issue encountered:
Real-time online traffic was used (see settings below). Load up at an airport with many parking spaces (1S2, KORS, KSFF, KYKM etc.) and look for traffic.

PC specs and/or peripheral set up of relevant:
Irrelevant.

Build Version # when you first started experiencing this issue:
Current build is 1.20.6.0 (SU6). This has been in the sim since the launch. 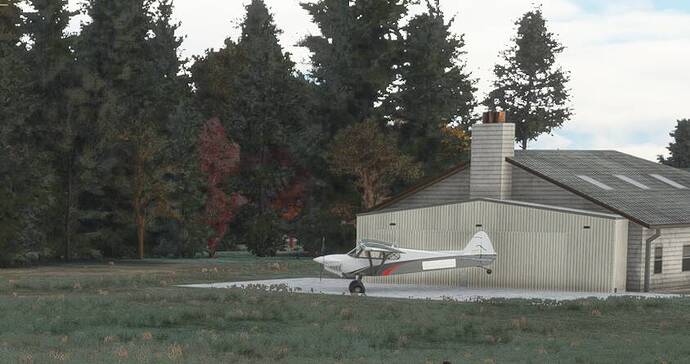 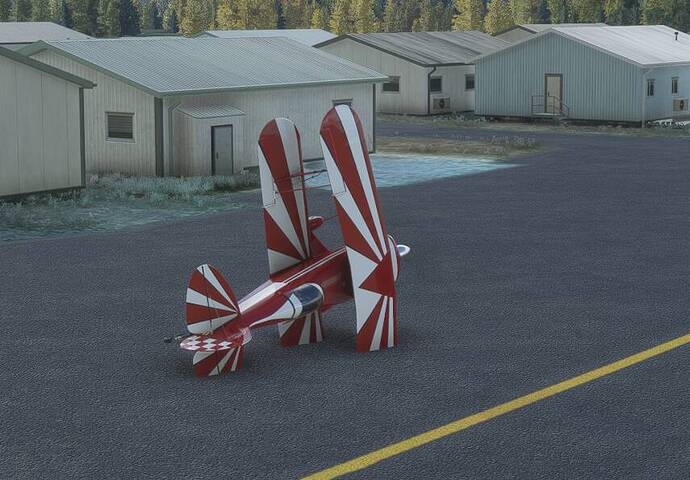 4 voted, i don’t get it, this one of annoying things

Can confirm - most of the time the prop is spinning as well.

most of the time the prop is spinning as well.

There’s another bug report for that:

I’ve recently noticed that some parked aircraft have their propellers “frozen” in a sort of partial animation. Not sure exactly how to explain it so here is a screenshot: Those propellers are not spinning in the screenshot above, they were as still as you see them, yet have a partial animation texture. Not sure if that’s something with the specific settings I have set or if it’s widespread. A bit annoying nonetheless. It does not happen with the sim’s main aircraft, just the somewhat generic…

Could you folks kindly give me some airport ICAO codes where this is happening? I’d like to see if I can reproduce it.

Thanks! Is 1S1 also an Orbx product? I’m trying to reproduce this without any third-party products.

I’ve definitely seen it at KWVI. And also at Lanai, Hawaii PHNY. Both of which are using stock scenery.
Seen it quite a bit, actually. And I only have a couple of freeware sceneries added, KHAF and Gnoss Field in Novato, CA KDVO.

I’m sorry, I 've mistaken this thread for another one. This happens regardless of the airport or addons. MSFS (at lease, in my setup) has obvious preference for taildraggers for some reason, so I have all airports full of them, and they all behave like that. On the video above, it’s default KSFF.

Sorry for the delay. I went to KWVI and PHNY and didn’t see it at either of those two airports. Are you still seeing it?

Sorry for the delay. I went to KSFF on two separate occasions and didn’t see this happen. Are you still seeing it happen?

I have been at KWVI a few times in the last couple of days and I see it pretty much every time. Even saw a Baron last time doing the wing into ground dance maneuvers.

I always spawn at parking space number 42 there. Near runway 02/20.

Just curious. If you start in safe mode, do you still see it? That would ensure that it isn’t something from a third-party interfering.

(In the past, I’ve been able to start safe mode by starting MSFS, pressing Alt + F4, then restarting MSFS. On the restart, I get prompted for safe mode.)

I have seen this situation periodically. Taildraggers with tail in air, and aircraft flipped into the ground.

Tail in the air is a very common bug. I see it pretty much daily. Is it really so hard to fix?

I’ll give that a try. Maybe later tonight or tomorrow.

I confirm. I keep seeing this and tail in the air even more often.