I started on a little Journey trying to understand why MFS Flight Model currently behaves in a way so criticized across the Forums by many users as Arcade Feeling. Luckly, I have found some real Flight-Testing Reports on General Aviation Airplanes across the Internet that has been very helpful in helping me try to mitigate the origins of these controversial opinions.

The First Graph demonstrates a Dutch Roll Inducing maneuver, which is basically Sharp Rudder Application, keeping Wings Levels, going back to Neutral after a Second, and letting the Airplane Return to Equilibrium with no interference. 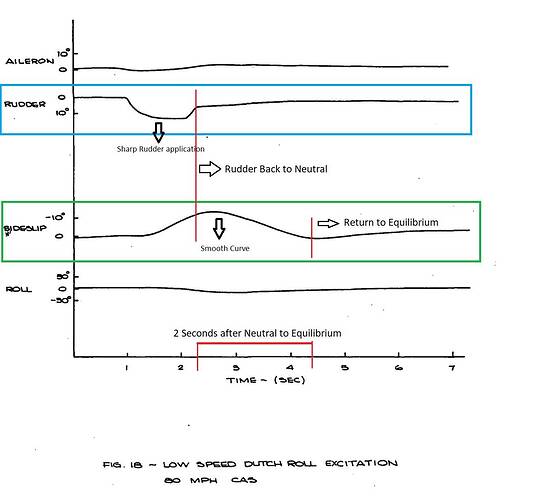 We can observe how in the Real Plane, the Pilot do a sharp application of Rudder to Full Deflection for one second and back to neutral, yet the Sideslip Angle line describe a smooth Linear increase until Max value, then comes back down the same way, with duration over twice that of rudder application. This is due to Factors that acts as Damping in Maneuvering Stability, preventing an Abrupt and Immediate Reaction from a Control Deflection (You can read more about this on pg. 268 from Aerodynamics for Naval Aviators). This affects Yaw as well as in Pitching Moments. Inercia of course also plays a role here, the smaller the mass, the more immediate the reactions from the Controls Displacements. Greater mass on the other hand, slower responses. This will directly affect how long it takes to return to equilibrium after Rudder goes back to Neutral.

When I saw the Graph, I immediately understood why everyone complains on MFS Flight Model having Arcade Feeling. Let me first say I have great admiration on what was accomplished so far from the Asobo Team in many areas, including Aerodynamics. The Evolution from previous Table Based FM in FSX/P3D is evident wherever you look, and I never considered going back to those Simulators! This is written with 100% Desire to help improve Microsoft Flight Simulator.

Now, as one can easily see on the Graph, SideSlip Angle Matches almost perfectly the Rudder Position, almost a like a Duplicate mirrored. This demonstrate a complete Lack of Damping Factors after Control Displacement, generating an Aircraft Reaction almost like we were in a Vacuum, reminded me of what I would expect in a Space Sim, where there is no Air to be in the way of our intended Action.

Inercia basically does not play any role here neither, as the airplane doesn’t seem to have any problem dealing with Mass, Tracking the Movement of the Rudder simultaneously, and coming back to equilibrium with barely any delay or overshoot.

To exclude this being a matter of flying a bigger plane, or Tweaking of the flightmodel.cfg, I tried both, with the TBM930, and also reducing YawStability to the minimum of =0.01, no significant improvement was noted, as this is an issue to the Core Flight Model, affecting all Airplanes.

While the experiments were done around the Yaw Axis, the Pitch Axis shows similar Results, as the Physics are basically the same, both deal with Airfoils generating a Lift Vector after a Control Input.

This is in my opinion an area that Asobo’s Flight Model Team needs to focus, as it is the main responsible for so many of user criticism of Airplanes having Simplified, Arcade Flying Reactions and Feeling. This is something people don’t need to study or become a Pilot to expect from Flying a real plane, same as a young gamer can differentiate a realistic Car Racing Sim to an Arcade Game with no previous Driving Experience. It’s something we all expect from dealing with Physics.

152 Likes
Physics and Aerodynamic on Directional Stability - Part 2 - Getting to the Root of the Problem
Sim Skunk Works - FIAT Aeritalia G-91 Released
Is MSFS what you expected?
Steinways January 18, 2021, 10:45pm #2

Thanks for looking into it in a way nobody has done yet… Hope Asobo/Microsoft sees this.

I was wondering the other day if the current version is actually handling the 1000 points of physical contact on the surfaces of the airplane to simulate flight as was explained in the runup to release.
Watching real flight video’s seem much more dynamic (and quite unpredictable at times) to me, but i can also understand that it might be a bit much for a non-die-hard simmer to be put in the dramatics of keeping an airplane on final in adverse conditions.

I would agree that it feels like the aircraft don’t have any rotational moment of inertia in the yaw and pitch axes; the control forces result in a pitch rate or yaw rate almost instantaneously.

It’s the same reason you pitch up and your aircraft suddenly pitches to 15 degrees instantaneously. I hope some people here find it odd that aerodynamic forces alone can cause tens of thousands of pounds of metal to suddenly drop 10 feet within a quarter of a second when rotating.

Excellent observations and research. Thank you! Hope it gets seen by the powers that be.

I had the same observation with instant action of the airframe vs control input (rudder pedals, ailerons). On sensitivity settings they introduce the Reaction slider that mimics this delay of response. Totally wrong because the responsiveness in the plane in control input, isn’t something that the user can manage but it depends on airframe speed etc.
I feel that asobo tries to hide the arcade flight model engine with code patches instead of more scientific solution.

Same question from me. Maye it’s similar to the water masks or the live traffic. Features that are in the roadmap but not fully developed or finished at release. The example in this thread demonstrates that something is not working well with the flight model.
The adverse yaw being another example

They need to get the rudder working correctly, once airborne in any msfs aircraft the rudder becomes unnecessary, which is incorrect

your observations are spot on! and contribute a LOT to document a core problem in MFS.

I surely hope ASOBO takes this into consideration !

I hope you don’t mind me setting lins to this excellent post at AVSIM, FSDeveloper and A2A forums.

Big THANK YOU for your analytic study !

Bump - Would love for this to get noticed by the devs.

Very interesting. Have you submitted this info through zendesk as well? Could help it get to the devs.

What happens when inertia is increased and rudder effectivess decreased?

Tuning the DA62/DA40, that’s what i have done. I need to do these tests with my aircraft and see.

also, at what speeds were these tests performed?

Great work! This is very interesting. Very hopeful for Asobo to read this.

Thank you for bringing this to everyone’s attention. Maybe you can also submit a Zendesk ticket and see if they pick up on it.

Wow, bravo ! Great great analysis. And perfect mindset in a sense to improve this already amazing simulator. As you, I feel bored to hear non stop criticism in a negative way. You take time to explain what’s wrong in the flight realism of MSFS. I’m PPL pilot and yes, it’s a question of inertial phenomenon. In MSFS, flight model seems linear and direct law. But as you explain, reality is more complex. Asobo must improve their flight model but needs to keep good performances, physics realism is very CPU demanding.
Hope Asobo will take an eye on your post with attention. I’m pretty sure (I hope !) they work with aeronautic expert. I cross my fingers they will improve their core filght model processing.

Thanks for taking the time to do this. I’ve had it in my mind since the sim came out that the best way to see what is up would be to do some controlled testing and collect the data and compare to some kind of a published reference.

Inertia and damping are pretty important aspects of the flight mode and they seem to be totally absent right now.

Reducing Control Effectiveness is what all good HandFlying Addons have been doing to get better results in MFS, including me, but this is not the proper way to go. If we specify correct Surface Area among other info, there shouldn’t be a need to decrease a Control Range to 10/20% of it’s real-life counterparts.

Also, this will only result in smaller reactions from our Inputs, still doesn’t solve the lack of Damping and other complex reactions that happen when a Surface is Displaced in Real Flying, so more of a Bandaid to remedy the situation until the Core FM gets Improved.

Someone mentioned Control Sensivity settings, etc. As both this tests were Tracking Actual Rudder Surface Position, not Rudder Pedal Position, it doesn’t matter how the Input was transferred to the Flight Surface, as long as the Surface Position is the same.

While Flight Sim Community have relied with Tweaking Control Sensitivity for a long time to improve Flying Quality, this shouldn’t be seen as a Magic Fix for all Issues, and in this one I believe I have demonstrated it has nothing to do with the Controls, but rather Core Flight Model Simulation.

Thank you all for the encouraging and kind words!I sure hope as well this gets to Asobo if it means improvement on our Simulator!

Thanks. Appreciate that. Was just trying to express that I thought it was an important topic.
I’ll never do that again.