Pitch too high in may planes

Is that just me or there is an issue ? Almost every plane I fly in MSFS I need to bump the cockpit camera all the way up for landing to see the runway. It’s just that the sight picture on landing doesn’t seems right to me. I don’t know if ASOBO/MS implemented “Angle of incidence” in the sim but almost every plane in the sim, start to pitch up too early and needing flaps close to VFE speed to maintain sight with the runway. Notice the Cessna 172 in the picture with slight nose down during landing 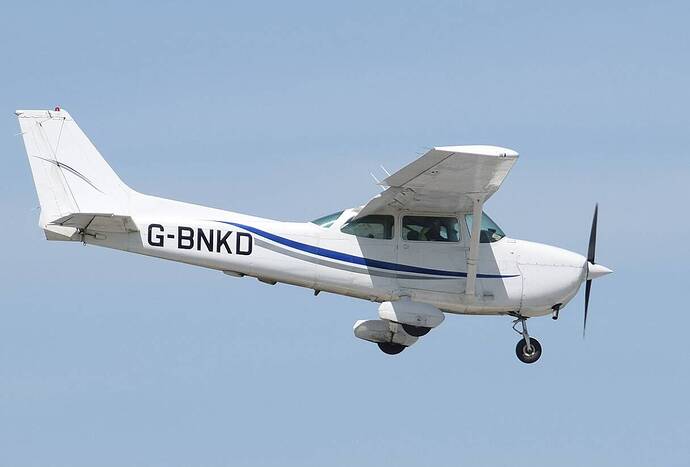 There is a VFR Landing View that elevates your POV so you can see a little more over the instrument coaming.

I personally use the space bar, which gives me an exaggerated view over the nose.

The issue is not just in the view but it reflects on an incorrect pitch attitude to speed.

Have a look at this Cessna 172 landing and how the nose is kept just slightly below the horizon on approach, This is how most planes land except the big boys.

Is that just me or there is an issue ? Almost every plane I fly in MSFS I need to bump the cockpit camera all the way up for landing to see the runway.

Yeah good point. I’d like to be able to translate the cockpit camera up. I can go left, right… can’t find any key for going up…

You can bind one if there’s not already. I use a binding with the POV hat on my yoke.

However note that there is a maximum height in many planes.

IMO the default POV is noticeable too low on most aircraft in MSFS.

IRL I don’t change the seat height during the flight either, so I’ve manually adjusted the POV for all aircraft.

Since you don’t know how fast the pilot in your video is flying and/or the glidepath angle, it’s not possible to compare AoA.

Its… Up arrow by default.

edit: Just checked the 172 and at the correct approach speed with full flaps on a standard 3° glidepath I’m getting the correct, slighty nose down, pitch attitude.

Is that just me or there is an issue ? Almost every plane I fly in MSFS I need to bump the cockpit camera all the way up for landing to see the runway.

Yeah good point. I’d like to be able to translate the cockpit camera up. I can go left, right… can’t find any key for going up…

On my system its the up and down arrow keys, thing about the 172 is even with the arrow keys you dont have alot of up. With that plane I space bar up, then arrow key down for the view and just leave it there. If I what to look around, I’ll switch to outside the plane, then when I switch back its the way I left.

Yes, spacebar does the same as Camera / Upper position.

Up and down don’t work here.

IMO it’s a bad idea to change the view height for landing.

IRL it’s very important to memorize the correct sight picture with the aircraft sitting on the runway.

If you change the view height only for the landing you have no idea what the correct sight is during the flare.

Again, you usually don’t change the seat height IRL either during the flight!

Found it… Cursor up and Cursor down were not assigned 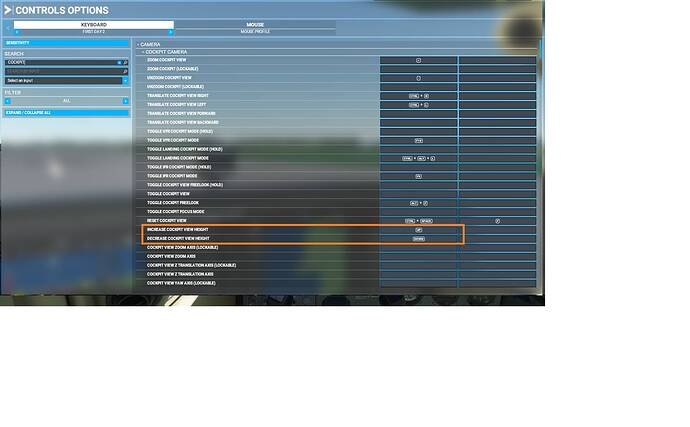 I would expect to be able to “scootch up” a couple inches though, changing my view by moving my head physically upwards/forwards, able at any time to return to my standard position. Or would I really keep rock-still without moving my body or head?

I always put upper position before taking off with Pitts. Else I don’t know where I am going

@PZL104 you may be right… but with Toronto landing challenge you’re supposed to land on the instruments ? In some aircraft, the default it is very low…

Rock steady without moving the body or head.

@ArcanePython931 In case of tail draggers where you can’t see over the nose, you usually use the left/right runway edges to judge the correct alignment.

Especially when landing in low viz it’s important to use the ‘normal’ seat position since the sight picture is already a bit unusual and hence you should use the POV you are used to.
Even during an autoland you are required to see the runway.

Definitely a problem in almost every plane. That’s why I set my own height and angles in the cameras.cfg file. Much better now.

I think the default position is low for most places I fly and I moved the vertical slider from 50 to 60 in the options, have yet to find a plane where that feels too high.

TrackIR does give me the ability to sit up straighter and lean forward a little to see over the nose more when necessary though.

Really? You never turn your head while flying? Are all these VR players lying to me? I’m genuinely confused. (Literally not being sarcastic; I’m genuinely, truely confused now.)