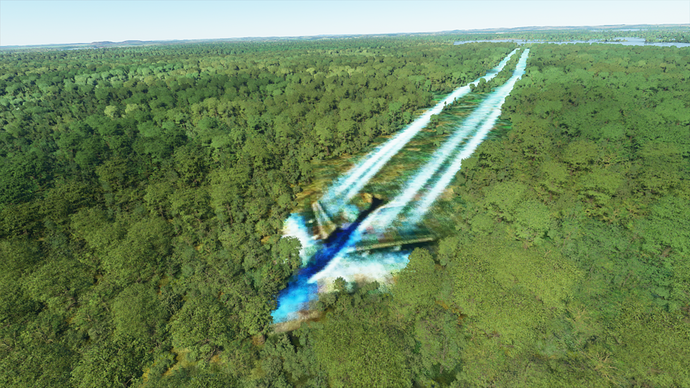 Saw the “skids” in the forest as I was doing a fly by and couldn’t figure out what I was seeing at first. 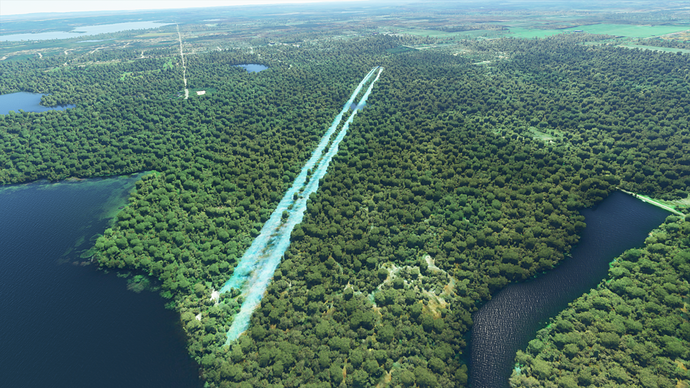 Interesting how the Bing imaginary gets interpenetrated. Wonder how many more of these there are.

Not a wreck but a good find, where is it ?

Immersion killer it is.

I suspect they are quite a few actually. I’ve seen a similar pair of lines like that a few times, that were probably the same contrails, but just didn’t find them interesting enough to get a closer look at the time. It’s only now that I’ve seen this post that I’ve made the connection, but I’m pretty sure I was looking at the same phenomenon in hindsight.

Looks like the sat image picked up a flying plane and flight sim software impose it onto the land.

There are contrails. It must have been flying when the satellite took the picture.
I realized there are some wing tip images on Heathrow taxiways. They forgot to delete them from the grass

You can find some. Another one is near LOWS, heading south

I saw one in the mountains near Monaco, Europe.

yes, there are many of those in the sim… AI should have taken care of that… )

This.
Seen one on Balkan’s bush trip.

Sorry how does this make it unplayable?

Does it stop your plane flying in the area, or make the program crash?

I think your definition of “Unplayable” is very different to mine.

I think it was sarcasm

Also a few around the Netherlands

There appear so many people on here who take the smallest thing and claim that it is going to end the world as we know it.

I understand that there are a number of things that aren’t correct in the program yet, but it is still great to actually have a new flight sim out there.

It was sarcasm - the person i replied to wasn’t being sarcastic however - hence my sarcastic retort.

I’ve seen a similar, but different, effect, where a plane was interpreted as some kind of building, so it looked like a plane shaped cake, extruded out of the ground.

Such planes on aerial photos are standard fare, Ortho4XP and OrbX users have reported the same.

The funny thing is just that the AI will create scenery from it. 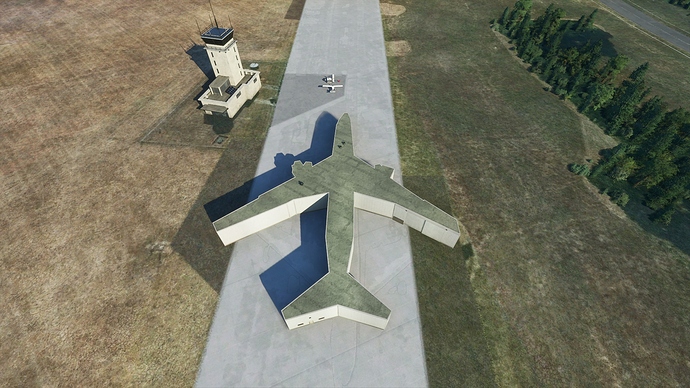 And btw, hunting for crashed planes would be fun. In the past there were various search operations like the crash in the Andes or the rescue mission for the airship Italia in which Amundsen dissapeared.

So next time you discover a plane, give some vague pointers where the plane was headed, how it looks etc, and other people could search for it, would be a nice mission.

This reminds me of the Nomadic in dry dock behind the Titanic museum in Belfast. The AI interpreted it as a boat shaped apartment block