Please make the Top Gun DLC carrier accessible from the world map, and in multiplayer

I’m really disappointed thatit isnt on the workd map selectable as a start location or destination, hope this gets added.

Great wishlist item!
Multiplayer may be not possible due to the limited start points available on a carrier.
It would probably require a wait period to spawn, similar to Reno Races?
Imagine there could be hundreds of aircraft spawned on top of each other

Surely a “Group” should be able to spawn one in?

I really would like this too. FSX had a few carriers around the world for you to have fun with in regular flight so it’s a shame they didn’t do the same with the Top Gun carriers.

It would be chaotic !

first make it landable outside the Mission

Given the fact that the DLC get delayed a few months because the movie get delayed it’s more than disappointing that there are no carriers for free flight and multiplayer included.
Not to mention the bugs (numbers at the start of the challenges that not disappear, pilots standing with pink textures in the fictional plane, wrong text in the german translations, <br><br> tags in the german translations …)

At the very least, make the tech available to Indiafoxtecho so they can update their excellent carriers. But this definitely needs to be available outside of the mission.

Honestly I’m not sure how this was missed. When you create one of the most popular and unique places to launch and land an aircraft from - of course people will want to utilize that outside of the challenges.

I think the carrier packs should be made operational, ergo arrester cables and catapults. As far as making this carrier free in open world, those of us who paid for San Diego just to get access to it would, rightfully, feel cheated. The fact they already have a fleet of no working carriers is disappointing. What is a carrier without catapults or cables anyway? Just a money grab, or devs feeling comfortable releasing half finished work?

The idea is to provide players with an exciting and somewhat realistic activity within MSFS. The intent is not to represent any one military or make a political statement / provocation with placement or location of ships / aircraft. ( Operations, composition, deployments loosed based on USN )

Ships should be based off real vessels, but not have country markings or flags. No weapon systems should be visible or simulated. Ship numbers should be fictional. Please make it work at all. Loading window still displayed while aircraft is in flight. Flying aircraft on external gauges. can pause and start the sim, just can’t see anything but loading screen. restarted SIM 4 times. Does this stuff even get the most basic of beta testing ?

When I hit water Alt = 0 I get landing challenge completed pop up on screen yet haven’t even seen the water, let alone the carrier and then there is no way back to main menu except an alt-F4 to exit game

Thanks GOD there are lots of free and perfectly good carriers available to use from main map. I have over 100 carriers I can land on and take off from in free flight and the one provided in the sim doesn’t even work as a landing challenge

I am also disappointed, not see the carrier in the normal scenery (or the same carrier model in several locations around the world). Might be difficult to make the functionality (cables, glide path, etc.) available, but nevertheless…
I suggest to vote for the topic to push up its visibility.

It’s easy to have a beautifully done Aircraft Carrier follow you around, under you, as you fly the seas and oceans of the planet, visible in your map. Just use X-Plane 11.5 where it;s there by default.
MSFS was a simulator until MFSX, twelve years ago. Then, in 2020 Asobo bought the name and built a video game for kids and folks who have no idea how to fly, but love Bing tourism.

thinksFlyer: Absolutely yes, FS2020, as a simulator, is a big disappointment. I was very much looking forward to the release and regarding on how technology improved + MS Azure, we could have expected a great simulator as it was many years ago. But two years after the release, with all the bugs and programming flaws, MSFS feels like a beta tester for a xbox game. The only reasonable simulated ACs are C172 (good for learning navigation) and FlyByWire Sim. A320. All other ACs do just look “nice”.

I agree with this wish. One os the reason of sticking to FSX is the naval flying for me.

It would definitely make sense to be able to land on the carrier outside of the landing challenge. That is the only way to actually get better at it.

We made an addon with moving and functional carriers in freeflight. You can try it out here: Moving Aircraft Carrier with LSO, Arresting Cables, and Catapults » Microsoft Flight Simulator 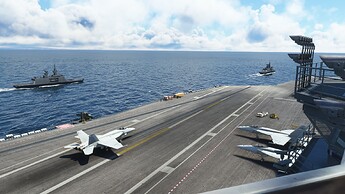 Frankly, this community is unrealistically demanding! Even if it’s a low cost product, MSFS 2020 has surpassed all expectations since its release date!! And MSFS continues to provide updates, improvements, and yes, lots of freebees as well!! But man, people are difficult to satisfy!! If anyone wants to operate military aircraft, and do what military aircraft do, why not acquire a product dedicated to that aspect of aviation, DCS World.