Agree. I’m getting very decent DX12 performance with the studio driver, much like in the first beta. Also solid CPU multithreading. As VRAM usage is high, I had to turn down TLOD from 600 to 400 to avoid going over 24GB.

Panning around both in cockpit and external view is super smooth. This was not the case before updating to the newest studio driver. In that case DX11 was much more smooth. My only interpretation of this is that the DX12 memory manager is in fact active with the latest studio driver.

I’m getting average fps of 53 flying over NZ South Island with Orbx mesh and higher than ultra settings. 1% lows 36fps. 4K TAA with render scale at 110. 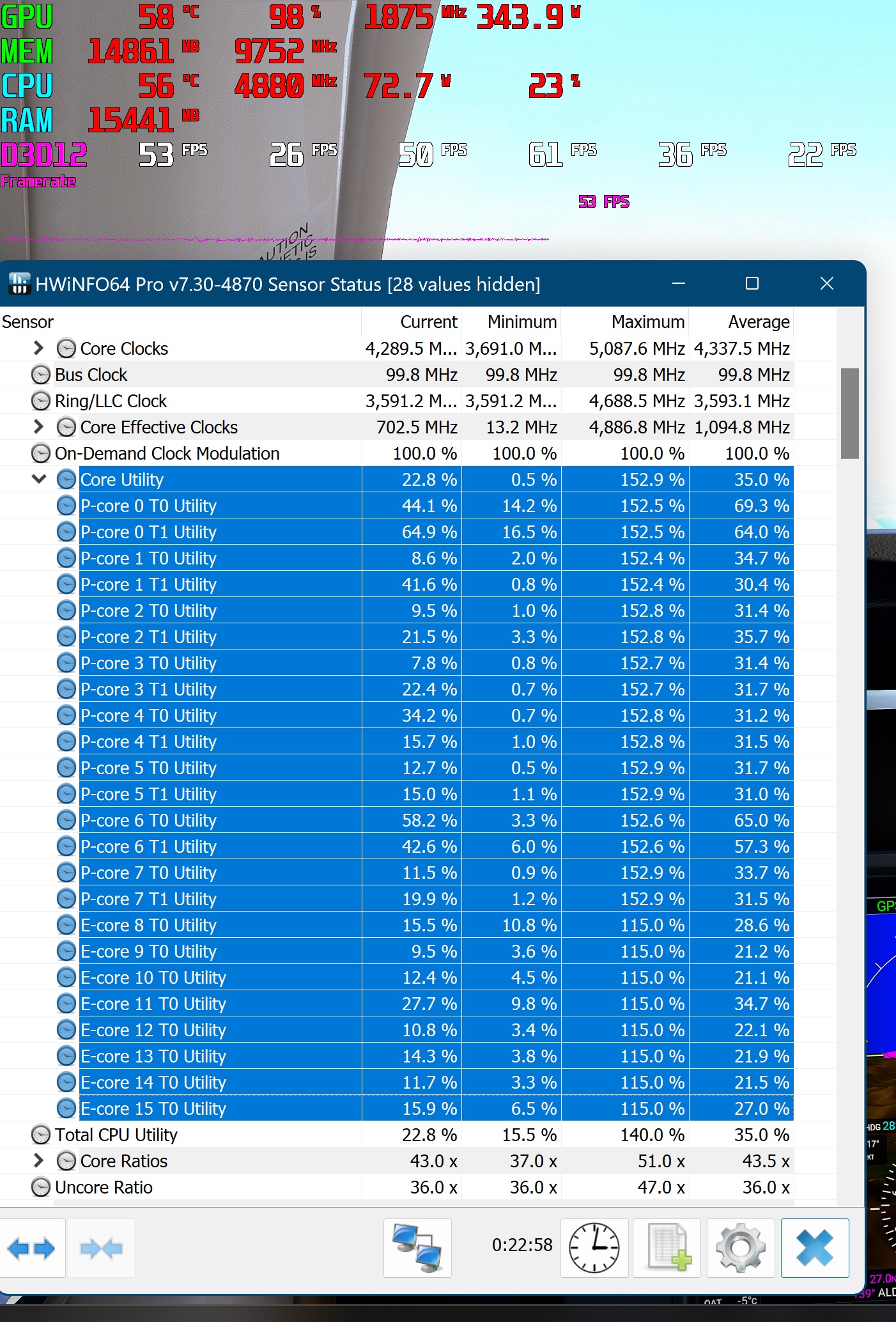 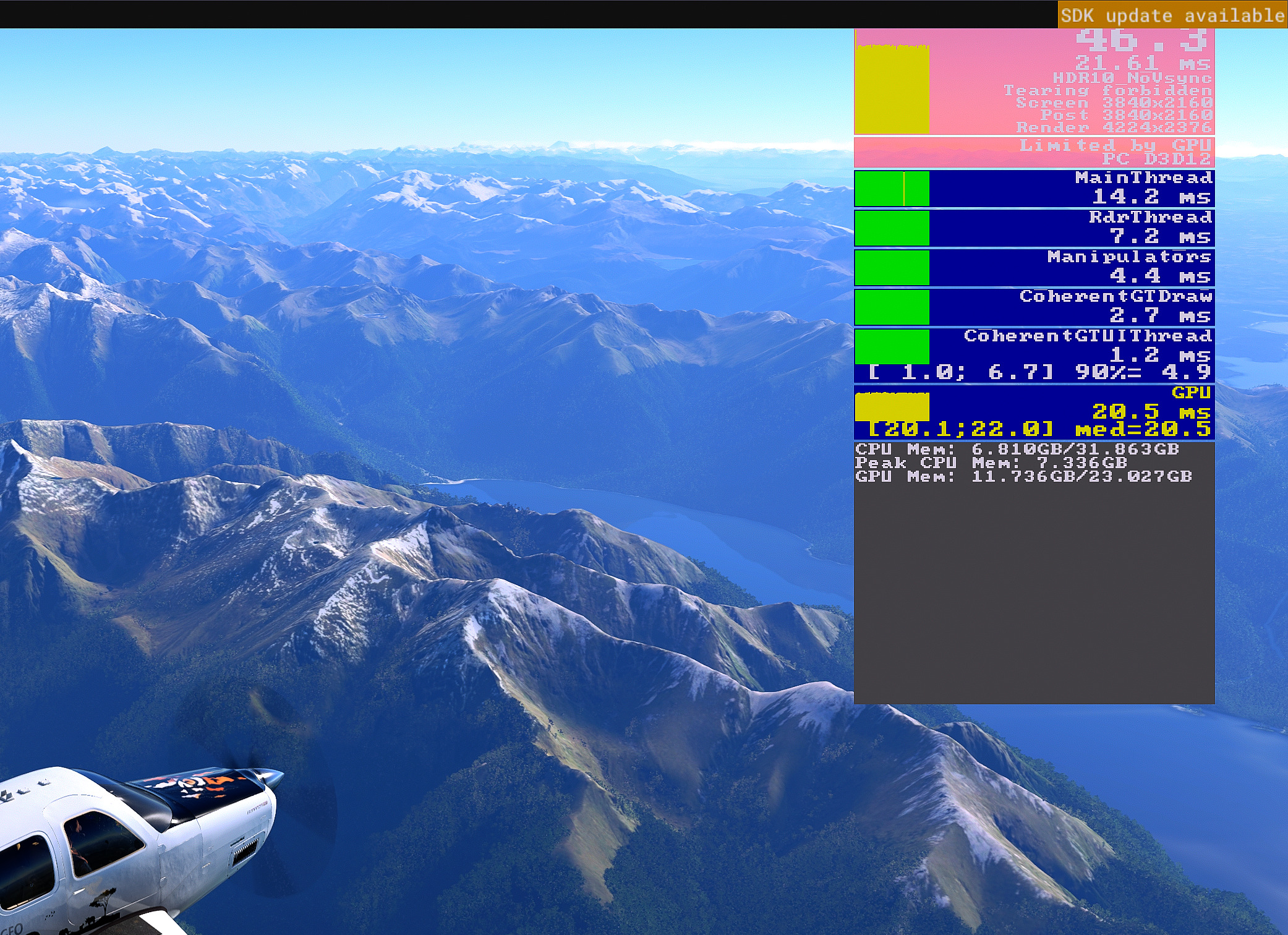 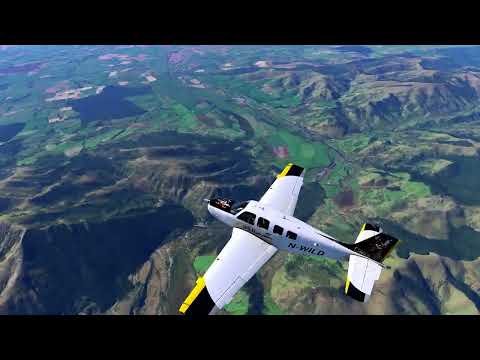 My only interpretation of this is that the DX12 memory manager is in fact active with the latest studio driver.

That’s my interpretation as well, and seems to fit with the not-quite-so official response from Asobo regarding the new driver and DX12 memory optimization automatically enabling. Using DX12 with the latest patch, performance is roughly back on par with the first SU10 beta build 1.27.9.0, which was by far the most impressive build in terms of DX12 performance.

People should be aware though that DX12 + the new memory optimizations will use a lot more VRAM. If you’re already near max capacity of VRAM using DX11, you might want to think otherwise about using DX12. Conversely, you can also reduce texture resolution by one level to reduce VRAM consumption.

People should be aware though that DX12 + the new memory optimizations will use a lot more VRAM. If you’re already near max capacity of VRAM using DX11, you might want to think otherwise about using DX12. Conversely, you can also reduce texture quality by one level to reduce VRAM consumption.

Exactly. This could very well explain the huge variety in how DX12 is working for people with different GPUs, even with the new driver in place. Exceeding VRAM capacity will probably lead to a disappointing, stuttery experience.

But shouldn’t any well designed game have processes in place to prevent available VRAM being exceeded? In my case the sim goes into a 40-50 second slowdown whilst it moves stuff between VRAM and System RAM, and that is poor design.

After all, the overwhelming majority are going to have GPU’s with 8GB or less of VRAM.

Conversely, you can also reduce texture quality by one level to reduce VRAM consumption.

Which setting would that be? Terrain textures?

But shouldn’t any well designed game have processes in place to prevent available VRAM being exceeded?

Yes, but DX12 requires explicit memory management compared to DX11. In other words, when using DX12, developers must control VRAM usage directly to prevent this type of scenario. Since DX12 is still technically in beta stage, I would assume these types of further improvements will be introduced in later SimUpdates.

People that are VRAM limited should probably stick to DX11 for now, unless you want try performance on DX12 and lower texture resolution to reduce VRAM usage.

Sorry, it’s “texture resolution” below the Object LOD slider. You have to restart the sim to see the changes.

Since DX12 is still technically in beta stage, I would assume these types of further improvements will be introduced in later SimUpdates.

I think this is an important point. I was just going to mention it, but you beat me to it

So VRAM jumped up to around 10GB being used… I guess that’s a good thing since the sim is using available VRAM. My GPU seems really bored now. Don’t have the exact numbers in front of me, but it’s about half the number of the CPU… Frames get locked in around 36 which is half my refresh rate of the Quest 2 running at 72Hz.

Performance is VERY smooth in the headset. I tried all this without the oculus debut tool which I was previously using to lock in frames. Now I just left it off.

So a few questions for you - Should I be concerned that VRAM is getting up to 10GB (the OXR display says 100% and sometimes greater at times). I do notice when I try to use the oculus dashboard to look at a desktop window, it gets choppy… when I go back to MSFS VR, frames go back up to 36 again and it smooths out

Should I start to increase settings to get my CPU to be less bored? Like I said, it is at about half the number the CPU is at right now. Any ideas on what I can try? Maybe I have some headroom, here?

One thing to note is that I do run streamlabs to stream VR at times… so not sure if this is going to impact CPU or GPU and if this will make a determination of what I should try to get that CPU working harder.

Anyway, thanks for all the help and for the previous posts here that made me take the plunge to DX12 and the new Studio Driver.

DX12= Out of VRAM. No stutters when panning but significant fps loss.

DX11= Better fps but more stuttering when panning in the cockpit.

My best experience so far with SU10 is the current game ready driver with DX11 and DLSS set to Quality.

same specs, I was ready to install the 517.40 studio drivers but reading your post I will keep on 516 GRD for now.
Thanks!

Hmm, something is very weird with your computer, especially if you use DX 11 with the Studio driver and get this error,

I rolled back to the current game ready driver. That error no longer occurs. DX11 performance is exactly the same as it was during the final few builds of the beta. DX12 is still unusable for me. But at least it’s stable now.

Personally, I am a bit weary about changing from Game Ready driver to Studio driver, but that’s just me. If you install a new driver again after your current driver, you may want to do a clean driver uninstall - people recommend using DDU for that.

If I were to guess, perhaps when you installed the Studio driver, there was some conflict with your older Game Ready driver.

Yeah, I used DDU to remove the old driver (which is at this time still the most current) before updating to the Studio. And used DDU again to revert back to the GRD.

I’m just going to wait for the new GRD to be released. The fact they released the Studio version this week, but not the GRD must mean they realize something isn’t quite right with it and needs to be fixed.

VRAM shoots up to the max and sim is smoooooth as silk.
Open up anything else or try to use the Quest to look at another desktop window in VR - VRAM overshoots (past 100% according to the openxr toolkit advanced display) and everything becomes a stuttery mess which I can’t recover from.

Seems like a poor implementation of DX12 if it is going to be allowed to consume every ounce of VRAM leaving no room for anything else. Unless I’m doing something wrong…

Anyway, back to DX11 and smooth performance I was getting before this experiment.

If “memory optimisation” means “use more VRAM than is available”, then that’s not optimisation in my book.

Seems like a poor implementation of DX12 if it is going to be allowed to consume every ounce of VRAM leaving no room for anything else.

DX12 is unlike DX11, where memory management is largely handled automatically through the API. I suspect this behavior will be addressed further in SU11, but as I mentioned a few posts ago, folks with 10 and even 12 GB of VRAM should probably think twice about enabling DX12 unless you want to decrease some visual quality settings. Unfortunately, this range includes most users with a 3080 and 3080 Ti.

Yep. It will pretty much use up any and all VRAM available. For people like me who need some headroom for things like Oculus desktop and streamlabs… it’s not going to work out. They need to do better. This seems like a sloppy implementation. Or I need a 3090 or a 4000 series card. Which seems a bit ridiculous given my 3080 Ti a pretty good card witn 12GB VRAM.

I am on DX12 with latest Studio driver, and I used to have the Openxr Toolkit set at 90% before SU10, with no other settings and it was very clear and more FPS. AFTER the SU update and running DX12 with the latest Studio Driver and a 3090 OC to 2040 MHZ (factory on a Strix 3090 OC w their OC preset in their software) I have found out that I do no longer need the toolkit, since I get better clarity and FPS without it at 100 % with DLSS Quality.
Your CPU is much stronger than mine (i9-9900K) so I would definitely give DX12 a try without the toolkit and DLSS turned on. I have gained at least 6-10 FPS after SU10 and even though my CPU is 4 years old, and my 3090 running at 2040, I am still GPU limited! That is an impressive update for my system. Forgot to say, I have an HP G2. Example; I installed a1000 watts power supply when I built my PC. way before RTX 3090’s came out. At the time I was told that was too much for a game PC . Today it would handle a 4090.