He is right. Rolling back drivers to 457.30 got rid of my stutters too. And I’m already using a 3080 but unplayable with the 460 drivers. This is how smooth mine is now:

Through the Lens Video with G2

Through the Lens Video with G2

G2 definitely not Rift S. There is a lot problem with Rift S.

When i turn on Performance monitor - i see lots ‘app missed submit count’ counting up with red.
App Frame Rate not more than 20Hz

I tried any options and variations with different driver version and ODT options and InGame options.

same here. especially the “ground stutter” thing seems a lot better for me with the newest driver.

This begs a question, because I clearly don’t get the same outcome:

Quick update: I’ve tried 461.09 with SteamVR 1.16.1 as I wanted to check whether it would matter, and I didn’t took precise measures but with motion smoothing it was not so bad at all to the point I could barely notice NVidia driver typical stuttering. To cross check, I’ve tried again the G2 with WMR OpenXR and 461.09 right after and it was really stuttering too much. This is becoming quite hard following up with all the changes!

No I’m saying the contrary!

Replaced my 1080ti with a 3070 (temp solution. Still waiting for the 3080ti). Tried with newest drives and it was terrible. Rolled back to 457.3 and it’s night and day. Nvidia needs to fix this ASAP. I have other games and don’t want to sit on aged drivers

Couldn’t agree more, I think i saw on the Nvidia forum that they will release a new game ready driver when Hitman 3 gets released… so around the 20th I guess of Jan I guess.

This is from 3 hours ago on Nvidia Forum 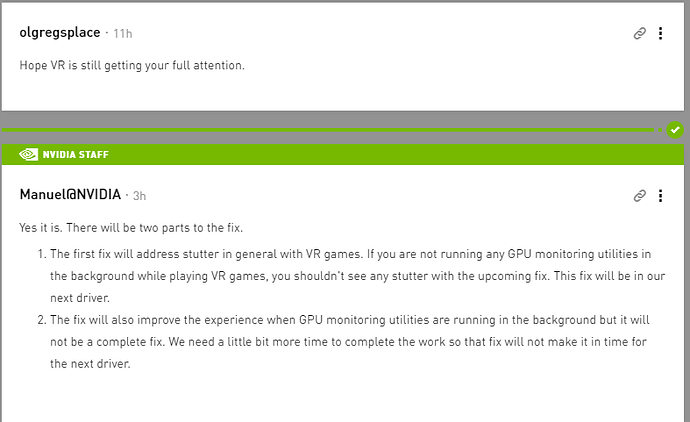 This is the most excited I’ve ever been for a GPU driver.

not measured this precisely because impression was quite good as-is)

GPU monitoring utilities does this include occulus tray tool and things like zotac firestorm .

Hello which driver would you recommend for a 1080ti? Reverb G2. Thx

Unfortunately I had the Same observation mentioned in the Nvidia post. With MSI Afterburner, running in the background, I get stutters. It literally drove me insane! I couldnt get rid of the stutters until I shut down Afterburner. And I’ve always thought overclocking my GPU would help my Frames…

Did nVidia give a time frame for this next driver release?