Reasons for using ReShade, attempt to use its shaders instead of some MSFS2020 effects 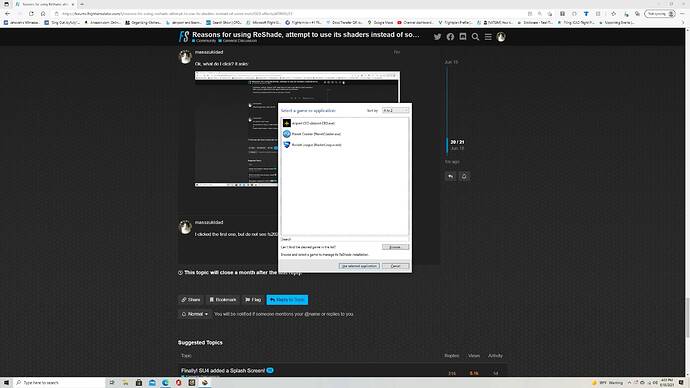 From what I can find on Google, Reshade will not work on any MS Store game, because of how MS has them locked down

There is a “pack” in flightsim.to called pilots perspective uploaded by someone who gives shaders for use with nvidia ansel.

You just follow the instructions and voila, the shaders work very well.

I’m using these instead of reshade on the ms store version of the sim to great effect, it even has a guide of which values to set to to give you an idea of where to start.

Dear participants of the discussion,
sorry I was not able to answer in time.

I’ve successfully installed ReShade on MS Store version of MSFS2020. My video with ReShade was also made with MS Store version of the simulator. It works. However, the method of installing ReShade on Store version is much more complicated than on the Steam version. Also, it may not work for all users. The reason of the difficulties is the “UWP” platform. However, there are chances of a successful installation ReShade this way. I can recommend a specific program to solve this problem. The program is located on the GitHub website and a YouTube guide has been created for it. Also, I’ve created my own manual for the program as it does not function well with the original manual. (I just need a little more time to translate the manual into English). However, I can’t publish this information here, because I don’t know if it violates forum rules or not. So, I ask the forum moderators for permission to publish the information here If possible.

In the meantime, I want to tell you the main thing. ReShade can work on MS Store version of the MSFS2020. This is not a myth!

About using NVIDIA Ancel/Freestyle.
I ask you not to rush to replace ReShade with Freestyle. It is not that simple.
I’ve been using Freestyle on the MSFS2020 for a few months. Then I switched to ReShade and will never go back to Freestyle again. Here are the reasons for this decision.

I’ve been setting up Freestyle with ReShade shaders for months, but I haven’t been able to get anything like what you saw in my video. Of course, certain results were achieved, but their quality and balance didn’t even come close to what I did in ReShade.

In general, Freestyle is a bit like a toy for me. There are no necessary settings, no set of shaders, no quality that I would like to get. This doesn’t look like a normal program for real-time post-processing graphics, in my opinion.

I’ve not tried the “Pilots perspective” shaders. Perhaps it gives good results. But I still don’t want return to Freestyle because of the above difficulties.

But this is just my subjective opinion based on my own experience. Of course, you may have a different look at this software.

Don’t get me wrong here, if reshade works well for you and you achieve your visual goals then that’s great.

I was just offering an alternative based on my experience.

Do you have a preferred setting in freestyle?

Was that question to me?
If so visual preferences are very subjective, what looks good for one might be different for others, best thing to do is just play around with it.

I do use the brightness shader and fxaa shader and I’ve calibrated my TV with windows built in calibration tool.

I’m not at my pc right now so can’t go into more detail.

Yeah that was for you. Thanks!

Hi, it seems famously. Could you give me any advise how I add FlightSimulator.exe to Reshade if I bought by MS store? I obtained message that I dont have permission

Blocking access to the “FlightSimulator.exe” file is one of the properties of the “UWP” platform. Most MS Store games are now released on the platform. If I understand correctly, the MSFS2020 is one of them. However, there is a program called “ReshadeForUWP”. Its author is “MilkyDeveloper”. It is specially designed to solve the problem. The program placed on GitHub. Unfortunately, it may not work for all users. However, there are chances of a successful installation ReShade this way.

I have devoted a separate topic to the discussion of the “ReshadeForUWP” program in the section on third-party developers. In the topic, I talk in detail about the program and my experience of using it. The manual that I mentioned above is published in this topic.

Here is a link to the topic.

Dear participants of the MSFS2020 forum! As you know, ReShade cannot be installed on MS Store version of the MSFS2020 using standard methods, because access to the “FlightSimulator.exe” file is blocked. The reason is the “UWP” platform. If I understand correctly, one of the properties of the platform is blocking access to the game’s executable files. However, there is a program called “ReshadeForUWP”. Its author is “MilkyDeveloper”. It is specially designed to solve the problem. The program pla…

in this video you can see a specific worthwhile difference using Reshade + installation guide, but this is rather not from MS Store … 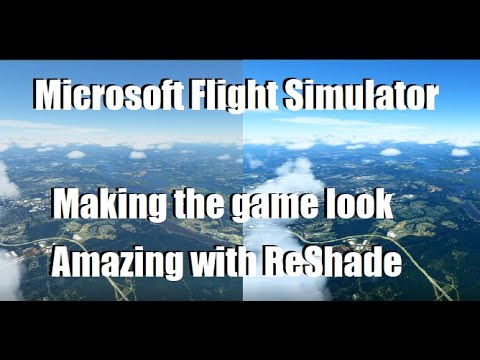 I dunno… I’ve never seen a use of ReShade that really looks better than original. It’s always “overcooked”.

I think it looks more realistic without it…

I use ReShade and i love it. But you are right it is a fine line, that it is not over overdone. For me all the HDR effects are to much.

I have only enabled:
MulitLUT, With LUT Nr. 8 (This alone eliminates the yellow-brown tone of the base sim)
Vibrance (To tune the saturation)
LumaSharpen (with low strength)

Many games do not work in VR if you use Reshade. I have VORPX which turns non VR games into VR (simulated) with fantastic results. Unfortunately, many Direct X games modified by Re-Shade will not work in VR. Anyone here tried MSFS with Reshade in VR? Interested to know since reshade is a great app.

Oh I see ok, I didnt know that about VR. Interesting. Perhaps a future version of ReShade will work with it.

Using reshade filters is fun and you can really fine tune the image to suit your own tastes. Be aware though that some reshade filters do have a fair impact on FPS, certainly if you don’t have a hugely powerful graphics card. Nvidia’s own reshade filters, though fairly basic, are designed not to impact FPS. You can use them via the Geforce app.

Coming in late to this thread, but several others pointed out that you can fix the over exposed sim and “colorless” sky and ground by using Nvidia’s freestyle/ansel settings. I’ve started using Ansel and it’s day and night better, in my opinion.