Reasons for using ReShade, attempt to use its shaders instead of some MSFS2020 effects

Dear participants of the MSFS2020 forum,
my name is Alexander Vengrus. I’m very glad to speak at your forum for the first time. Let me share with you my ideas about using ReShade for the MSFS2020.

I made a video to compare the above mentioned graphics changes with the default graphics of MSFS2020. 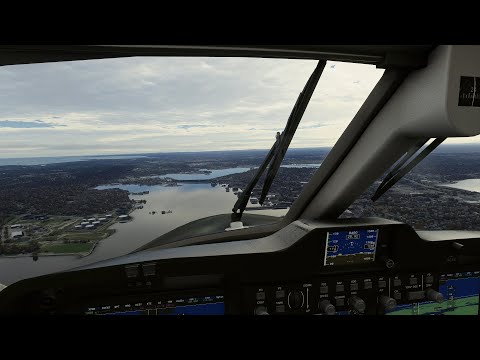 The settings, add-ons and shaders that I used are listed in the video and its description.

The video demonstrates:
a) Cinematic, analog shades of color for the simulator.
b) “CAS” shader in three variants of settings. (The default “Sharpen” of MSFS2020 is off during this time.)
c) MSFS2020 “Lens ccorection” vs lens effect modeled through “Pantomorphic” shader.
d) Using “MXAO” shader for a more non-linear image. (Not to replace the ambient occlusion effect as I’m not sure that it is necessary for the simulator.)

(Timecodes in description of the video.)

Unfortunately, I’m not showing a comparison for “CAS” and the default MSFS2020 sharp on the video. It takes a long time to create such a video because you need to edit “UserCfg.opt” many times, which means you must restart the simulator many times.

I would be grateful if you could express your opinion about the ideas.

Of course, ReShade changes the graphics in general. There is no way to selectively change graphics of individual objects or surfaces. (Except for selective replacement of some colors, areas of the screen, objects at a certain distance, etc.) This is a disadvantage of any overlay used to customize the graphics. But in my opinion, it is possible to find the desired image balance if ReShade tuned carefully.

WOW…all I can say is wow…what a difference. Completely life-like to me.

PLEASE send this information to Asobo.

The age of the artists working at Asobo is important becuase we begin to lose the ability to perceive blue as we age, and compensate by creating images that are more saturated as a result to compensate.

Which to me is exactly what MSFS is…way too blue.

Evidence: How vision changes as you age

Ok, seems like mostly a contrast & sharpen filter? Looks a little more contrasty, otherwise I have no particular preference between the default and the reshade versions.

I used more than just contrast and sharp shaders. The core of color grading is the “PD80 Cinetools” shader. This shader significantly changes the color structure and adds a lot of cinematic shades. I also use “ColorMatrix”, “Tint” and “RetroTint” shaders for additional color grading.

Very nice, congratulations. but for normal people or maybe dumb like me could you please tell me what to do with all these files.

Did these changes degrade the performance of the game? I ask because from what I can see in the video, the performance is poor. Low FPS and not smooth. I could not play like that.

The visual differences are great and would like to do this myself, but not at the cost of performance.

No, these changes are not the reason for the poor performance. The reason is my computer’s lack of power. I have about 27-28 fps and stuttering on default graphics of the MSFS2020. When using ReShade, I get about 25 fps. The performance could be even lower on my video as I used the second overlay to record the video. So, the total performance drop is only a few fps when using my ReShade presets. I also didn’t notice an increase of the stuttering when using the Reshade. (In general, I noticed that the ReShade works much more stable on MSFS2020 than on other flight simulators.)

Looks good, do you know if it works in VR? With some headsets (quest 2 at least) we have no way to adjust even basic monitor settings like contrast so something like this would be nice

Unfortunately, I don’t have any VR equipment, so I can’t test my presets on VR. But I would be happy if the presets worked correctly on it.

Let me now clarify the logical structure of my ReShade presets used on the video. Sorry if the structure was initially unclear.

List of ReShade shaders that I used for the presets.
“Cinetools”, “ColorMatrix”, “Tint”, “RetroTint”, “CAS”, “Curves”, “MXAO” and “Pantomorphic”. The more complete name of each shader and its developer listed in description of the video.

Versions 1 and 3 are different color correction options. In turn, each of these presets has three variations of “CAS” shader tweaks.

Each of these presets has been tested on the video. Each fragment of the video called “RESHADE” also contains the exact name of the preset that used in the fragment. This preset name is shown at the top of the screen, under the word “RESHADE”. But it is shown only at the beginning of the test fragment, for a few seconds. I did it to free up the screen space.

I am new to using re-shade. I know that you mentioned that the shaders used are in the video description but would you be kind enough to provide the links to where I can get these from.

Bit overreaction here for something you need to squint at to see the difference
AlexVengrus June 18, 2021, 12:43am #14

Hello, FijiPilot.
Sorry for the delay.
There is no need to search and download shaders specially. A window will appear where you can select the necessary shader packages during the installation of ReShade. Then Reshade will download, unpack and install the shaders automatically.

You need to select the following shader packages for correctly work of the presets.

I’m ready to describe the process of ReShade installing in more detail, if necessary.

How do you install reshade?

I’d like to use ReShade instead the nVidia Ansel but I purchased the simulator from the Microsoft store, and I can’t access the . exe file

Could you please post or upload the preset files along with the shader settings you are using? I did not see this info in the video.

I’ve been using ReShade for years in all my games including MSFS and the results are amazing. The creator of this fantastic little program needs a medal!! I just cannot imagine games without it!

These are the shaders I use but you may want others:

Colorfulness, Vibrance, Sharpen, FXAA , Magic Bloom etc make a huge difference. Each shader has a slider so you can adjust the look of the game in real time and save the preset.

A tutorial runs at game launch to show you the basics. Have fun. 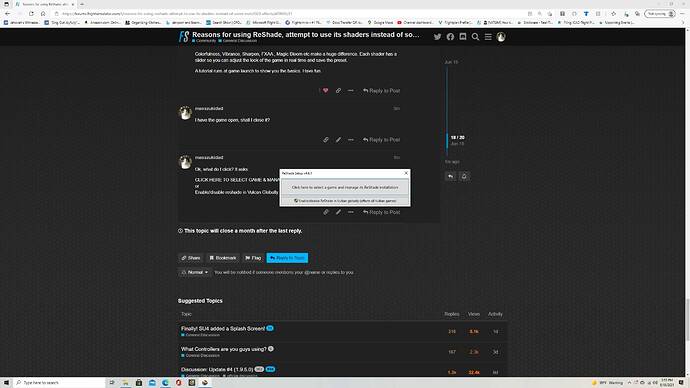