I had edited my “Good day” to “Goodday” and in my opinion, it sounds more authentic.

American ATC, particularly GA traffic, sounds like something from the days when Citizens Band radio and the movie Convoy (Kris Kristofferson) was a thing.

The benefit of my change is it tells me how far off ATC thinks I am from my current altitude. I used to inch up until ATC stopped telling me to expedite. Now, I climb up to that offset and they stop. In another flight, I climbed to FL410 and didn’t hear a peep from ATC about altitude. When I am handed off to another controller, I am telling them I am at FL410 descending to FL390. But the next ATC does not tell me to expedite.

Here is the result from my text changes: 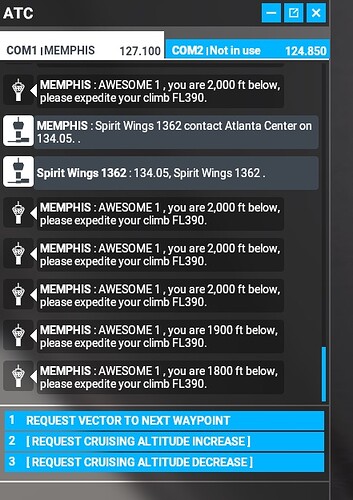 @timinorlando You can change your altitude like I did or edit the line and remove context. The sim will trigger the response, and as said here, a blank line will be published.

For English for US.

Make a Copy to something like en-US.locPak.bak
If something goes wrong, delete the edited file and rename this backup to the original file name.

I believe .tts is for spoken words and .text is for that displayed in ATC window. You can put any words in there, too. Like “Have a great day” or “I think it is lovely you are flying this high”, “The clouds are like soft pillows and the birds, well, you can’t hear the birds from up here” or any other corny thing you want to put there to get a laugh.

Remember, this file will be replaced when you get an updates for the sim.

Thanks. I might try that. It’s a pity that we even have to do this. Sometimes, actually I think most times it’s off by about 1000ft.

I don’t speak from personal experience, but having watched a lot of flight videos, I can agree that it happens a lot. Not all controllers say it.

It’s just too often and too repetitive in the sim. It gets unrealistic rather quickly when every single controller you speak too says the exact same thing signing off.

actually I think most times it’s off by about 1000ft.

It depends on where you fly, altitudes, and weather. Are you setting your altitude below FL180? Pressing B on the keyboard will set the altimeter to your current location. When I say altitude, I mean barometer setting within the altimeter. Above FL180 it should be set to 29.92 inches. Other wise, the altitude is measured at each airport (and other weather stations) to determine the barometer reading. In my image, my altitude changed 300 feet in just matter of minutes entering or leaving a storm system.

In my opinion, this issue exists because ATC doesn’t compensate for STD barometer settings above FL180. I am not exactly sure what code of the sim broke, but this appears to be the problem.

IRL, each aircraft is equipped with an altitude encoder that measures the pressure altitude of the aircraft and sends that altitude to the transponder, which in turn communicates that with ATC via Radar. There are compensations within the radar display that shows the actual altitude of the airplane adjusted by the barometric pressure. The pilot sets the altitude (barometer reading) in the altimeter to corresponds with ATC reading.

Weather.gov presents a good idea on how the pressure altitude works:

Flights above FL180 (18,000 feet above sea level) should set their altimeter to the standard barometer setting so all aircraft above that level are “on the same page”. These flights may cross different weather conditions, which may vary their altitude by a few thousand feet, and flying at higher speeds. If they did not have a standard, mid-air collisions would occur in the skies above.

Yes I know about barometer settings;) I had read the reason it was broke is Asobo was working on a way to finally get this right as it’s never had been correct in previous versions of MSFS but in doing so they broke something. I’m hoping for a fix in WU6.

interesting you hear it that often. I had the impression I only hear it after handoff to another controller or
when no further communication is expected. I must pay more attention to it. It also seems to me ATC sounds a bit more ‘normal’.
I think they increased the speech speed slightly.

Its very valid input. Flag it all you want. There are way bigger issues to address than this.

Yes, it’s a bit ridiculous but it’s very realistic and we do use “good day” for both hello and goodbye during morning, afternoon and night.

Actually when we use it, it’s pronounced much quicker than the sim. I think that’s the problem. It’s too slow in MSFS. Maybe it should be changed to “G’day.”

As many already said I’m fine with ‘good day’ - what I’d like to see or hear would be much better overall variety which could be provided by Azure.

Probably it would be possible to set up some small database with the airlines used in live traffic to link those to regions, this would allow to set up nice accents

Also those fix phrases could be randomized at least - maybe also with regional influences. Flying in german air spaces could lead to greetings featuring “Guten Tag” (it’s quiet Common to greet in the langage of the destinations local language If one knows it). Also regional carriers do use their local language when getting in touch with ground/tower in their own country

Something like:
‘Guten Morgen, Eurowings 123 to Palma ready for departure.’
‘Hellas, Air France 456 on approach 12 left’ (landing somewhere in greece).

On top ATC could respect the time of day (good morning/good day/good evening).

The whole ATC still needs big improvements - by now it’s still the FSX tts feeded by Azure. That has to change

If you change it in the file to “Goodaye”, they say it with an Australian accent, or at least on mine they do.

Its a Text to Speech so it would probably not say it as you would do IRL.
It would separate G and day (with all likelihood) to G day. And if you say that out loud, it sound a bit artificial.

You might be able to do some weird trickory to the text to make say it in a natural way.

All mine are in a American accent.

Even if i change my Language to something else.
Its weird that i can have part of the UI in another language but not all, and the TTS is ALWAYS in US English.

It wasn’t that long ago. Or am I dating myself too?

And for our European controllers that would be bugger off. Lol