Here you go. I’m not sure if this is good or bad. I just know it looks way better than I’m used to, lol. 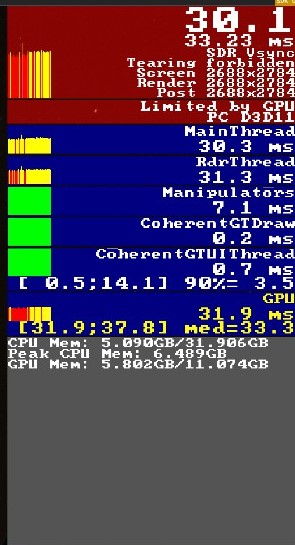 Now that I’ve getting much cleaner video I can see some of the issues with the Quest 2. Looking with eyes off center cause distortions and blurry images.

Thanks for posting up the screenshot. It looks about what I expected, ie. you are running at roughly the same resultant resolution as and we are getting similar FPS but from what you say earlier you have a few settings at Ultra whereas I’ve got all mine set to high, so that’s about where your 3080ti should be versus my 3080.

Re Vsync difference I’m not sure. Perhaps you are using motion reprojection, which is syncing you to 30 FPS.

I knocked most of the Ultra settings back to high since then. Although I didn’t notice anything change. Which I’ve heard other pepople say happens if you don’t bother to look at FPS. I have clouds still set to Ultra since those bother me when they look funny.

I’ll see if the Synchronous Spacewarp in VD impacts the Vsync .

I run Reverb G2 revised driven by a 3080 ti. I sort of wince when I see VR users posting that they’re using multiple settings at Ultra. My preference, since I can’t tolerate the artifacts of motion reprojection, is to keep FPS at 40 since anything lower diminishes smoothness in the virtual cockpit, though 40 is definitely not perfect. Here’s the settings I use to achieve this. My “luxury” settings are cockpit shadows and windscreen effects, 'cause for me the cockpit interior experience is where immersion lives. I’d love to always use clouds at Ultra but I find that is a huge FPS killer. If the weather is bad I’ll drop clouds down to Medium to keep my 40 fps. I find the #1 FPS killer is the effective MSFS render resolution, so I now use 85% of the G2’s resolution as it strikes a good balance between FPS and visual clarity, with the help of OpenXR Tookit’s FSR filter. By no means is any of this gospel, for everyone has their preferences.

I haven’t checked my fps off the ground yet but I used to get a bump once airborne. I might be up to 40 fps.

I think Virtual Desktop is just good at handling lower frame rates for some reason.

I tried the Oculus 2 headset in 60 and 90 FPS configs with and without SSW. I really noticed no difference. My FPS was always between 29 to 36. I think with the headset in 60 fps mode the frame rate seemed to cap at 30 FPS.

What settings govern how clear the buttons and text on the PFD/MFD are? The only thing I do that really seems to improve them meaningfully on my 3080 is OTT super sampling, but that eats up a ton of overhead that frankly, I don’t really need everywhere else on the screen as the rest is fine at say, 1.2SS, while text is really only crisp at 1.3+.

The only thing I’ve found which reduces that blur is to increase the MSFS effective render resolution, which SS does. Unfortunately as you noticed, increasing the resolution noticeably deceases FPS. I’ve and others has seen other flight sims where this instrumentation blurring is not nearly so pronounced, here’s a topic I started discussing this issue.

I’m so new to the 3080ti upgrade I’m still blown away I can see the G1000 PFD. I used to have to use the VR focus all the time. It’s like getting new glasses and being able to actually see.

The AP panels on the MFD start to get blurry from the seated position. I’m sure there is something that could be improved.

I think the RTX 3090ti was just released today!

I just tried many different configurations and with everything set to HIGH I was getting 30 - 32 fps. If I made the sim look bad I could push the fps to 40 fps (on the ground). You really have to push things low to get a boost. The funny thing is, the video did not look any smoother but video quality was degraded.

Since I have a Quest 2 I tried rendering as close to the G2’s resolution to see what that would yield. I think I lost about 3 fps. Pushing the render scale even higher didn’t improve clarity any further as the Q2 was probably the limitation.

A bump down in resolution by 15% degraded instrument clarity and yielded a few FPS. Not worth it.

The RTX 3080ti by far the best option for this game indeed, I settled with the Asus RTX 3080ti ROG Strix LC. It even beats handily its big brother, the RTX 3090 ROG Strix OC, despite that the later runs somewhat higher in OC mode. My problem is, I can’t find a decent affordable headset, that can keep up with it. I’ve been using the HP Reverb Pro until it went south (VR-1000, G1 based), and replaced it with the Reverb G2. I’m heart broken, because the performance would be incredible, silky smooth with everything in High and Ultra settings, 85-95% scale resolution (100% in OpenXR). The game runs fluid, even on glass cockpit aircraft over highly complex terrain of cities, like London, Paris, etc. Unfortunately the headset keeps going blank every 5-10 minutes, or even freezes, while the game is still running fine on the flat screen (displaying the split image for the VR). I contacted HP, and the only resolution they offered, to bring it back to the store where I bought it from, since its still new. I don’t want to have anything to do with Oculus and fecesbook, so I can’t think of any affordable option, with 2160 x 2160. Others reporting the same issue with this headset, and there’s no solution to resolve this issue, unfortunately. I doubt this would have anything to do with the rest of my system, which is based on the MSI MAG Z690 Tomahawk DDR-4 WiFi, Intel core i9-12900K, SKILL Ripjaw DDR4-3600, Samsung EVO 970 Plus 1TB NVME system drive, and EVO 980 Pro 500 GB storage, where the game is installed. Unfortunately the headset will be heading back for return, but I have no clues what will replace it. I don’t have the budget for a $1200+ 8K Pimax, that would likely keep up if it supports 4K mode only, for sure this system would be unable to support its native 8K resolution, I don’t need that. I would be curious if someone would have any suggestions, what else is there in the price range of the HP Reverb. Sorry about the long rant…

I am currently using the following settings:
100% in MSFS with medium/high settings
90Hz x1.5 for quest 2 in oculus app
Oculus Debug Tool Fov to 0.8 and ASW off
OpenXR toolkit FSR 110% and 50% sharpness

If I go with VD, I won’t be able to use the same settings (for oculus app and oculus debug tool). What do you use for your settings in VD / SteamVR ?

Until now, all my tries with Steam VR were really laggy although my wireless is good and working well with Air link. I guess my settings are not good.

I switched over to a G2 a while back so I don’t remember many of the settings. VD has many you can tweak that help with latency.

Out of the box VD needs less tweaking.

I had a similar problem early on w the G2 and a 3090. I did three things that eliminated the issue and has made my MSFS experience pretty much bulletproof. 1) Upgrading the power supply from a cheap lower end 750W unit to a higher end 1000W unit; 2) uninstalled my wireless mouse and went with a corded USB mouse (turns out if I left the BT mouse idle for a bit, awakening it caused a brief system glitch that caused a 10-20 sec freeze/blackout; 3) moved all my USB peripherals to external, powered USB ports. Of course, your issue may be unrelated and with the wide range of hw and sw combos, ymmv. Good luck figuring it out.

I used to spend a lot of time tweaking with all the various tools and settings. But since I got Virtual Desktop, I no longer use OTT ODT or OpenxrToolkit. In game is all high and Ultra, consistent performance and stunning quality throughout the sim. No more tweaking or using any tools. View the 30sec video over Los Angeles I just did…
5950x 3080Ti Quest 2
https://youtu.be/lhiWyHAEbR0

It looks beautiful!
Could you tell me what your settings are in VD and steam vr please?