On 1.9.3.0 version, I’ve noticed during all phases of flight, that the rudder has a periodic “twitch” as of it gets stuck a few degrees. I then can fix it by snapping the rudder back briefly, on,y to have it do it over and over again. Anyone else notice this? If you didn’t “fix” it as I described, then the aircraft would crab along slightly banked and sideways if on AP.

Sounds as a calibration issue in your joystick or dirty pot (potentiometer) in same. Perhaps a little dead zone will help.

Not sure how else to calibrate. Brand new Thrustmaster Airbus sidestick so no pots. This only started happening after this update. Don’t have this issue in either P3D or X-Plane.

Calibration can be done in Win10. Carnt remember how to get there. Google it.
Anything else mapped to the rudder axis? That could interfere. Since no problem in p3d or x-plane that could be it.

It’s not the TCA. I have one too. There’s a noticeable twitch as if someone was kicking the rudder bar every so often. Windows calibration shows these new Hall Effect sensors equipped sticks as dead centered, every time. No drift, nada.

Yes, this is exactly what I’m experiencing. I’m glad I’m not the only one but this is making even hand-flying completely unpleasant. I’m flying in X-Plane right now and don’t have this issue. We really need the dev team to quit with the eye-pleasing stuff and get the basic underpinnings of this fantastic platform ironed out. It’s already far superior visually than anything on the market right now. But the flying experiences are not as sharp.

I’m going to investigate the possibility of a mapping conflict. I had this happen for the heading 10-degree bug so will check. I do have the drone yaw control also mapped to the rudder twist axis. Will remove to see if it makes a difference.

I have a Thrustmaster TCA Sidestick Airbus edition, and about a week ago I started experiencing these twitching false inputs on the rudder. It had a distinctive tendency to produce false inputs to the left.

I noticed that these twitches were more or less pronounced depending on whether I was applying pressure on the stick, and also whether I was pulling up or pressing down on the stick.
I could even see the intensity of the false inputs in the windows usb controller settings.

This indicates the issue came from the hardware and not the simulator.

I opened the stick handle by removing all 7 screws (5 outside on the left side, 2 inside the side buttons housing on the right side) using a Philips screwdriver, and found the source of the problem :
The wires coming down from the head of the unit were all tangled up together when passing in front of the Z-axis sensor (yaw sensor) and pressing hard on one of the contacts on top of the Z-axis sensor. There was also a pretty big glue filament linking the top of the Z-axis sensor and the rest of the handle, showing the unit was assembled quite hastily.

I used scissors to remove the glue filament and get a clean interior.
Then I untangled the wires and spaced them evenly inside the handle so that they would no longer put so much pressure on each other (especially near the Z-axis contacts on top of the sensor).

And here we go ! A fixed Joystick with clean and precise Z-axis, like new !

Windows Game Controller shows no inadvertent Rudder Axis movement though, even when I run the stick through full cycle of movement. I’m not trying to discount a hardware problem, but WIndows is seeing is what’s being input to FS.

Wow! great investigative work. Now I vaguely recall someone posting about the TCA Airbus stick that said “yea, it’s great until you have issues with the twist”. Interesting. If it turns out to be the stick, I’ll RMA it and go get something else. Interesting though that I don’t get this in XP but when flying the A320 in P3D, for the first time ever, I couldn’t explain why it was side stepping in a yaw that I couldn’t correct. Perhaps indeed you’ve found the culprit…

Thrustmaster Airbus sidestick so no pots

I have this joystick. It has a potentiometer on the Z axis.

I was in contact with customer service thinking my unit was done for. Just took it apart and discovered the same! Working as new now… thank you!

YESSSSSS, thank you Sir !!! So used to have probs with msfs, that i didn’t think a sec, it could be a hardware problem…

I encountered this issue recently. After I dissemble the stick I noticed the exact same situation as you mentioned. Seems like a common thing at the assembly line to me.
And follow your instruction the Z-Axis issue finnaly resolved. Thank you!

The rudder is indeed a potentiometer on the Airbus stick. The X/Y axis are hall sensors and work beautifully. Best stick ever.

It twitched on mine too, exactly same issue. I opened the handle, and checked that the pot was fine - and made sure no wires were tangled when I put it back together. It has been fine now. Maybe some QA issue on assembly?

You’re a genious man, you solved my problem too, thank you. A perfect stable rudder now ! Such a relief ! You won my eternal gratitude i

Well you saved me! I had the same problem. I opened up the handle, gently pulled out the wires from within the handle to give it more slack outside and routed the wires for the top hat switch around the hole for the screwdriver, and untangled the three pot wires so they don’t mix to the best of my abilities. Also removed the glue on top of the pot (but kept the one on contacts), closed everything up and there is absolutely no jitter in the rudder any more.

Have a virtual beer!

thank you! This saved me time and many headaches!!

So the TCA Sidestick yaw/rudder twitch finally got bad enough that I went ahead and followed your process. After disassembly, I found the wires separated well enough but found one of the wires pretty badly pinched. See photo below. I simply routed them away from the plastic post behind them which I think was binding them up. They really could have done a better job.

I guess those with this problem had our units built by someone late in the day on a Friday! 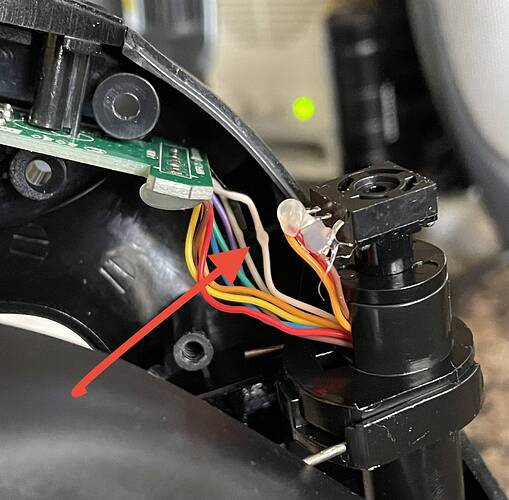 I am experiencing the same problem… will try this fix tomorrow! Thanks for posting the solution!