1 to 4 are exactly the same problems I’m getting. Gotta say before 9 update I was having zero problems and the sim looked amazing. They should give us an uninstall option for update 9 until they can get it right.

Where are Asobo based, bank holiday in UK here, so nothing would be done today, I think they are based in France though??

HI, I’ve been part of the beta program on xbox serve X, the earlier built where OK but I always have the long first picture at launch for more or less 1 min before the game boot, on the last built I have all the issues you talk about, let’s hope they fix it ASAP
I’ve also notice with a friend some strange bug in New Zealand at the Milford sound airport, the terrain is “inception like” did you notice this strange bug aswell ?

I totally agree with what you’ve said here mate. I thought that being a technical aircraft to fly, it would be processor heavy, but when you look at it from a rendering point of view it makes sense.
I don’t want to get off topic but I am having issues landing the Concorde using ILS, I even followed the flight plan in the manual to the letter and it still decided to veer off and do it’s own thing on the glide slope.
Is there a decent Xbox Concorde thread that you know of on here?

This has been an ongoing issue with the A32N for a while. The Chronometer menu is still broken too. Both issues seem to be ignored.

There are now more problems with the ND and map since SU9. #xbox

Is there a decent Xbox Concorde thread that you know of on here?

The main Concorde thread is more than decent. It has very many posts relating to ILS capture so be sure to read the history before asking repeat questions. The developers themselves have put huge effort in to support customers directly, I think the most helpful and active of any team I’ve seen on here.

it’s just so unfortunate, i experience all those exact issues on my XB series S. Just to fly the other day i had 4 CTDs in 6 minutes…

Series X? Is it still holding up for you?

On Xbox? How do you do that?

xbox dash > my games and apps, under manage game, it shows you whats installed for said game, one such is offline mode I believe, its not a requirement to have installed unless the internet drops while playing of course.

have an interesting start to my flying bank holiday day. i am showing all on line , world map was slow as expected now, flight loaded ready to go on runway. but before hand, content manager all grey out stuck on refreshing and showing nothing loaded on my xbox x. i expect an imminent crash

Well, I’m glad I am not the only one with big time problems. Ugh, I JUST bought the Xbox Series X and Flight Sim on April 22 (only game I wanted to experience right now). Fri. night, Sat. Sun was amazing, jaw dropping as a new user. But since this update, eh…deflating!

Once it loads to home screen, the cursor freezes, stutters. Click on World Map, it may load or ir may not. If it does, zoom into the map…total freeze, I’ve had to shut it down multiple times.

Then random crashes to the XBox main screen in mid flight or on approach to an airport.

Honestly, If I didn’t experience 2 1/2 great days of flying, seemingly flawless experience with FS - before this awful update, I would have returned the console and 2 disc game. I’ll just hang on and wait for a bug fix…and hope it comes soon.

Without having the constraints button on in the a320. I had 3 flights yesterday, two of which were over 3 hrs. I had about 6 crashes from the world map, but once the sim finally loaded in it was running fairly well. I did notice a BUTT load of ai traffic moving around. So it would appear that is something they are trying to address. But to no avail i would have to say. It was just a mess. I also had multiplayer, live weather on, and only encountered a few stutters on the ground at LAX. The weather however seems a little bit different in terms of two massive wind shears that knocked me off course and disengaged autopilot. Im sure this has happened in real life…But twice in one day?

Edit. The weather was acting as though, as it updated mid flight and when the wind direction changed. it confused the sim and throws the aircraft around like a tin can (LOL) not sure if you’ve accidentally hit the rudder in flight causing an uncontrollable nose dive. The wind shears were similar in effect to that. but I managed to revcover.

Updated the OP with another screenshot of some waypoints not loading into the FMC. This makes airliners unusable as the autopilot cannot navigate past these “broken” flight paths. 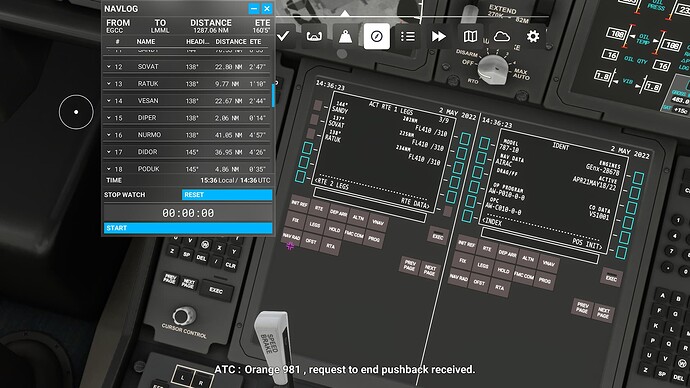 When all goes as planned, it’s brilliant. So unfortunate that is a lot times no longer the case…

I recommend looking through the legs / pln page in the FMC before takeoff. If there’s a break in it (empty space between two waypoints) then you’re in for a surprise. I’ve tried setting up three routes today. None of them worked. I can’t fly and I can’t express how utterly disgusted I am by the state of this simulator right now.

was i wrong. an enjoyable flight round CZST softly weather on in my dcsigns strearman. after 45 minutes went to return to main screen now stuck on splash screen. different.