They have done their best to fix a lot of things:

Some people are just complaining that their specific issue, which in their view is the most basic one, is not fixed soon enough.
Why not just sit back and relax and accept that Asobo will keep fixing issues in time (and undoubtedly will cause new ones, because there’s lot of untrodden ground here) and give it a priority according that they think is best.
It’s all a matter of what they are able to do with the people they have hired.
And don’t tell me that they didn’t deliver magic.

Asobo caused all of these problems and it is not at all taxing to write some messages asking that issues be resolved, so I am perfectly relaxed.

The problem is, if you have 10`000 of beta testers you would have the same ccomplaints over and over again. But the devs can only focus on some issues with every update. Thats why betatesting is always limited.
I think the way they chose now is a good one. Having a few selected ones that know what they are doing with specific topics to test. Plus the additional 300 randoms to have a wider variety of systems.

If you let in 10000 "average joes" you would get 10000 bugs reported that are already reported and on the list and the developers have more work to filter out the things they want to fix in this update.

Beta-Testing is always done in a very small “circle” of trusted and known users.
Everything else makes no sense.

I was in many Beta-Teams in the Flightsim industry and believe me, its not always fun, its real work if done right. So trust the testers and the developers that they know what they do and that there are multiple reasons to not let thousand of unorganised individuals in the tests.

It will only benefit EVERYONE in the end.

The sign up process is first come first served. There is nothing scientific about it at all.

There are selected testers aswell that were not randomly picked with first come first serve. They were “handpicked”. This includes known mebers of the forums, 3rd party devs, real world pilots.

If you let in 10000 "average joes" you would get 10000 bugs reported that are already reported and on the list and the developers have more work to filter out the things they want to fix in this update.

Absolutely, we as paying beta testers know all about that.

Yes, I look forward to the correction of the 1 degree lateral drift error as it pertains to turbine overcompensation, insufficient fuel flow, air temperature, rudder deflection and wear and tear on the landing gear with a 60% prop feather and the dew point at the outer marker on a Tuesday. None of that means anything of course but even if it did this game will be the same slow, clumsy, unreliable mish mash of bad decisions it always has been. At some point you have to ask yourself, are you talking to the right people or do we need more pragmatism here?

Absolutely, we as paying beta testers know all about that.

The larger point being, that if they fixed some of those bugs then people wouldn’t have to keep reporting them. It’s not at all complicated.

It is complicated, because besides what you write here, there’s 10.000 others reporting other, and in Asobo’s view more important issues. They will first fix the most important things before they can fix in their view more minor issues. 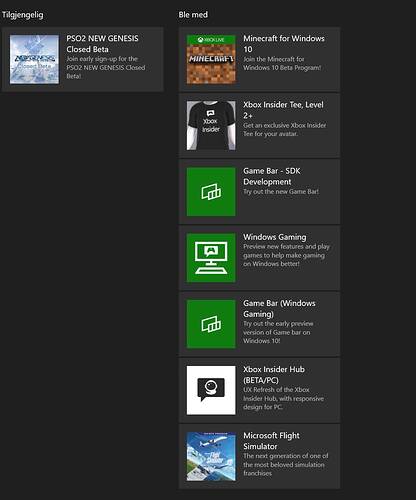 Plus the additional 300 randoms to have a wider variety of systems.

Looking forward to the testing. Will do my usual flying about and having fun whilst looking for issues that are new and following the guidelines from MS/Asobo. Will see how many of my world tour legs I can fit in over the weekend.

Just picking up on a few things from the posts above and more generally:

To the doubters I’ve seen elsewhere about whether people will raise bugs etc or just want early access - well last time the private forum area was a wealth of good information exchange between many of the 300 testers - I didn’t count, so don’t know exactly how many - we spotted a bunch of bugs - sometimes hard to tell if they were new or existing, but we raised them anyway.

Asobo caused all of these problems

Of course they did - they wrote the code in the first place - easy to throw rocks though. Plus the point of this kind of testing is to find some of these issues, so not sure why you are unhappy about it - surely this is progress?

The sign up process is first come first served. There is nothing scientific about it at all.

This builds on the last test where it was only us 300 randoms - so this is the next evolutionary step. There are handpicked testers, based on a number of different criteria, as well as us randoms.

If I can help a little bit to make everyone’s sim a bit better I’m happy to play my part. So I’m happy to do my “work” and be unpaid - can’t say I’m going to think it feels like work. I’m thinking I’ll have a lot of fun, and if I can help out with some of my time to explore and investigate and capture some bugs in the process, I’m willing to do so - and I’m going to bet that is exactly why most people wanted to sign up for this. It would be interesting to know if this time around the testing was more oversubscribed than last time. I bet more - because more people see this as a useful process they can help with.

Since you ask the question my answer would be, do they? The flight planning map is atrocious and has been since launch and all the way through the alpha and beta, presumably. Asobo don’t appear the grasp the simple strategy of fixing things that are most visible to let people know they are listening. Show me tangible improvements to the basics then I’ll believe you, until then though…

You’re assuming that because they haven’t fixed it they don’t know about it - clearly not the case given all the feedback etc. They are juggling priorities - their priority list just isn’t the same as yours

Having private forums and NDAs will only further exacerbate this issue, this is just a game, not a shell corporation for the CIA.

Not commenting on the NDA, but the private forum was really helpful last time becuase we could share info etc and it would have been massively distracting to have questions and input from others not able to see the same things as we were. I wouldn’t have a problem opening that forum up after the test though (it would certainly kill a lot of nonsense that has been written and assumed about the apparent inpetitude of MS, Asobo and the testing population).

Why must beta tests for updates have to have NDAs? What are you trying to hide? Please move towards getting rid of this and making the beta branch public.

Having the branch public and having NDAs are not the same thing. This is a closed beta - doesn’t seem to be about load or scaling tests that you would use a public beta for. The areas of the sim to be tested are set out for the testers by Microsoft. NDAs - don’t have a view and not bothered if there is one - other than that we can’t refute all the nonesense that is written in these forums about the testing!

So hereby I salute MicroSobo and the community volunteers for all the great work they do and the steps they take to really make this more and more a community event!

Agree completely with this

Are the allotted 300 slots filled? I’d like to get in on this, but I suspect it’s probably too late. Plus, I really don’t want to lose my logbook. Again.

I don’t care about a full reinstall, with my gigabit connection it only takes about 20 minutes.

It might be. But you can try by joining in the preview from the Xbox insider hub app.

I was already too late a few hours after it opened. So maybe better luck next time.

I already joined the insider program and then left, very much on purpose. I was not a fan of some of the things it was doing to my system, so as much as I would like to participate in this and future MSFS betas, if it takes being an “insider”, I’m gonna have to give it a pass.

Which is a shame.

That’s the reason why I am holding back at the moment as well. I would like to have an opt in and out so that I would be able to choose when to test and when to play ‘current school’. Maybe Asobo will add such a feature in the future.

Keep posts on-topic and not on each other. Some posts were removed as they were off-topic, caused derailing and discussion of moderation.

I would love to be an MFSF beta tester (at least for some things), but I don’t want to have to be an “windows insider” to do it.

I would love to be an MFSF beta tester (at least for some things), but I don’t want to have to be an “windows insider” to do it

That, too. But somehow I got under the impression that one had to be an insider, if that’s not the case, even better. Thanks for letting me know.