You are posting this on every thread that mentions the Kodiak? Or just two?

For what it’s worth, since the latest patch it flies just fine IF you follow the numbers, down pitch trim, rudder trim right, take off at the published specs and don’t just floor it with the throttle but actually follow the chart. There are a few niggles, specifically the autopilot disengage resulting in an immediate lost of stability. It also gets a bit too hard to control as it nears its stall speed. But to repeat: if you pay attention to the charts it’s not nearly as bad as others make it out to be. I acknowledge it could be a bit better though. I think keeping a stable approach is a challenge but haven’t actually flown a Kodiak IRL so can’t say. My issue is more that the throttle is too sensitive at the required thrust for landing, resulting in either too much or too little power.

Just the two, but as people don’t read every post I’ll post it anywhere where people need to be aware of the issue with it.

The flight characteristics you describe, and also admit are not optimal, are also nowhere near what the Kodiaks real life performance is supposed to emulate, even remotely. That is my point.

I’m copy/pasta that again, as it’s important reference material regarding the actual low speed flight characteristics that the Kodiak 100 is supposed to exhibit:

"The airplane was a joy to fly at any speed. Slowing to 85 knots indicated, the Kodiak was easy to control. I slowed further. With no flaps, I brought the nose up to 58 knots, a full 12 knots below the start of the white arc, and still felt the ailerons respond. I could not get the airplane to break in the stall, but the 600 fpm descent showed that the wing was tired. With 20 degrees of flaps, I got a slight break at 44 knots, 5 knots below the red line.

The Kodiak’s benign stall characteristics can be credited to the wing design, which essentially consists of two separate sections, defined by the obvious wing cuff, to ensure airflow remains over the outer portion of the wing. The airplane definitely inspires confidence when flying in technical backcountry environments. Even though the seats in the Kodiak sit at least twice as high as in my Mooney, the landings were easy and smooth."

It’s why I’ve hangered the Kodiak for pretty much all of 2022 when it comes to doing STOL utility turboprop flights, and always go with the far more predicatable Milviz Porter or Caravan (modded).
Poor old Kodiak is my hanger wallflower due to this issue.

I sincerly hope they finally manage to fix the flight model, as this otherwise great plane doesn’t deliver on its potential, unfortunately.

POH calls for a powered descent 80-85knts to touchdown and then only reduce power to idle/beta. Aircraft weight makes a reasonable difference to Landing speed too. Letting it drop below 75knts is bad news as by 69 you will losing yaw control.

That manifesto was too long to read. The Kodiak remains my favorite plane in the sim. DHC-2 fast becoming #2.

Manifesto. I like it. ‘Essay’ was what I thought. I like the Kodiak a lot. It flies very true to the POH - as much as any aircraft in the SIM. Pitch sensitivity is somewhat peripheral dependent and easily tuned in the SIM. I do like the Twotter and Milviz PC6 too.

That is a very abbreviated part of the POH and does not take anything into consideration, such as weight, wind, landing strip type etc. Go forward in the POH and there are more charts that show the stall speeds at various weights.

And at empty Kodiak has a Vref of something like 47kts. You wouldn’t land any aircraft at 30kts above stall speed.

I read that review of the Kodiak and also agree that the simulation doesn’t approach that ease of handling near minimum speeds. But it’s also a lot better than others who are in my opinion just driving it without considering the performance limitations of the aircraft.

I will agree that it needs some work but still can be rewarding if flown properly.

Oh, I’m well familiar with the POH. And you are right the stall speed for a completely empty aircraft (5000lbs) at zero bank angle with a most forward CG is a mere 43KIAS.

But who flies the Kodiak in that configuration? I usuallly fly the cargo pod variant at 6800lbs, sometimes heavier, respecting load station limits which usually gives a fairly aft CG. That gives stall speeds of 58KIAS. Which I find accurate and I aim for a Vref of 75KIAS. Before gusts in Live weather you used to be able to go lower, but now it’s too risky.

But that is not the most relevant data for safe operation - the normal procedures are. If you fly close to stall speed in the critical phase of landing you put yourself at considerable risk - as you pitch up to flare, p-factor will increase and you will start yawing to the left more. As the same time you are usuallly entering ground effect you may lose further control as you bleed speed but gain lift and either yaw out into a stall or drop onto the runway at 450fpm… You can easily lose 10KIAS in the flare itself.

I purchased it a couple of days ago and have been flying it since. Here is my experience from the last two days:

Can’t rotate at 55 kts definitely but on full throttle and suggested climb rate and torque as mentioned in the cockpit on a sticker, I have climbed at 2,000 fpm at 135 kts. So I don’t see a problem there. But it needs to be flown at 80% throttle, anything below eventually causes a stall after a while and subsequently a crash as the stall on this airplane is unrecoverable. So definitely some issues with the power in general.

My gripe is that no matter what weight I add to the shelves it doesn’t show any payload in the cabin - just an empty cabin - but with the weight logged.

Secondly, taxi lights and landing lights do not show any illumination. I can see the lights falling on the runway - in an uneven manner - but the wingtips with the lights only show tiny white dots.

Lastly, the aircraft doesn’t glide at all. With the throttle set to idle, it stalls and drops like a stone within seconds. The flaps drag doesn’t seem realistic either - it’s way too much. Hence, I am not enjoying any smooth landings, and I have been practicing on runways before I head to the backcountry bush strips - the very reason I bought it.

To top it off, Simworks Studios are not responsive either anyhwere. I have dropped them a line each on Twitter, their website and now here, but no response so far.

I also want to know how I would be notified about any updates on this product. I bought it off their website. It was an installer that unpacked itself into the community folder. That did not get synchronized with the Kodiak 100 on the Marketplace and it still shows an option to install it.

To top it off, Simworks Studios are not responsive either anyhwere. I have dropped them a line each on Twitter, their website and now here, but no response so far.

I don’t know if Simworks Studios are American based, but keep in mind that yesterday was Thanksgiving in the US, one of the most important holidays over there, so I wouldn’t expect any response before next week if that’s the case.

Thanks for the response. Happy Thanksgiving.

SWS are active on their discord. They are talking about an “upcoming patch” and they are aware of issues related to flaps having too much drag, etc.
John

I took another flight in the Kodiak and one of the gripes I just was reminded of was the inaccurate ITT at cruise. Should be able to fly at 700-720 degrees at higher altitude but can’t. Doesn’t make it unflyable but still something that would help ideally be addressed.

nice i totally agree with you:)

I was keen to test the Kodiak’s STOL capabilities so I took it to Rogue River Valley in Oregon.

I flew it very light (4980lbs). This was the cargo pod version with normal wheels. Live weather, but the pressure alt was sea level. 15 Celcius and little to no wind, so ideal conditions really.

Landing at rny 14 at Half Moon Bar (23OR, 1228ft of dirt) was a lot of fun given its crazy approach and a bit more of a challenge. With flaps 35 and a Vref of 73knts 'till clear the trees I was able to make a ‘firm’ landing at 60knts (maybe a little bounce). No yawing or loss of control and the landing roll (max reverse and full braking) had me stop in no more than 700ft - calculated stopping roll was 579. Not my finest landing, but I would take it!

I also took off from rny 14. Now that was a challenging departure! The only field I didn’t manage to land at even with a number of attempts was 75OR. It’s insane. Maybe in a KitFox.

So perfectly STOL capable…in that configuration and those conditions. Not sure how it would do at 6800lbs. That might be the next challenge. Flaps 35 is certainly too draggy and it’s very hard to maintain a constant speed. Just takes practice and super focus I guess. Video of my ‘firm’ landing… 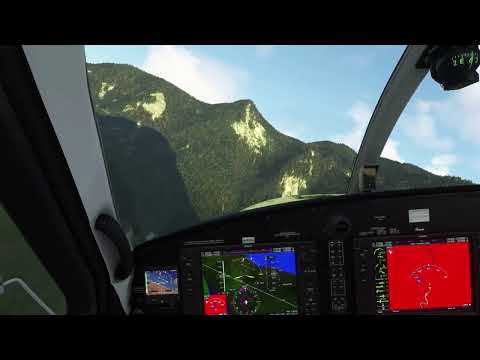 I have to say that I have not been enjoying flying this aircraft at all with so many issues. I am discouraged to fly it again.

Alex from SWS reponded to me saying when you put the throttle in idle position in-flight, it’s like you’ve hit a wall!

That’s how bad the flight model is!

The aircraft doesn’t glide at all. With nose down and throttle generating power continuously, the landings are very rough and the entire dynamics of the glide path are changed.

A turboprop at idle thrust has a huge amount of drag, the prop is like a big disc. You need to leave power on right to the flare and sometimes all the way to touchdown.

In the real airplane I leave power on until the main wheels are almost on the runway. The Dash-8 we landed with power on. It’s not like a piston engine airplane with a fixed pitch prop.

The flap drag has been reworked, I’ve tested it and it is much better.

Thank you for that input.

I have flown other turboprops (TBM 930, Grand Caravan, and more) and their idle thrust drag is not like the one on this one.

There are definitely issues with its power and flight model that need to be addressed.

In your opinion.
Personally I love flying it. Landings are a joy. One of the best aircraft in the sim and there’s plenty of users who also think so.

Alex from SWS reponded to me saying when you put the throttle in idle position in-flight, it’s like you’ve hit a wall!

That’s how bad the flight model is!

Could you please quote this statement entirely? I can’t believe Alex put it that way. MSFS has some issues, but certainly not a bad flight model at all.