In my area we have snow above 800 meters and it was very well depicted yesterday evening. Today, same place, live weather on with matching clouds, temperature and winds and… no snow even if the temperatures are still negative.
Not far away, in the Alps, I still see live snow (and I mean live snow, not snow that was already on the bing images) so I don’t know why my mountain range has lost its snow right now.

About snow and roads: the model works very well for dirt roads but feels unrealistic on paved road around cities.

Edit: the more I test the more I tend to believe they have some sort of safe mode for snow. Meaning, if the server that feeds live snow is not working for a reason, parts of the the world get a winter snow coverage anyway.
Right now, with live weather working I don’t see any snow on small or medium mountain range: German Black Forest, Jura and Vosges (they had an accurate snow coverage yesterday evening in the live weather).
However the main valleys of the Alps have snow (see Courchevel, Chamois AO02…). I notice they are located on parts of the world map that is depicted with a snow cover so I guess those are the “safe to have snow in winter” places.

Edit 2: this afternoon the snow is back in the smaller mountain range… who knows why?

When it works, I’m quite satisfied by the accuracy of the model. Here is a comparison for the situation in my area yesterday. I took the picture above while flying yesterday, at the bottom is live weather from the sim (taken with exposure enhancement because it was already night time when I came back).
There were three different situations visible IRL: full snow coverage of more than 20 cm with snow on trees, full snow coverage of less than 20 cm without snow on trees, partial or almost non existent snow covering. All those three situation were accurately depicted in the sim. 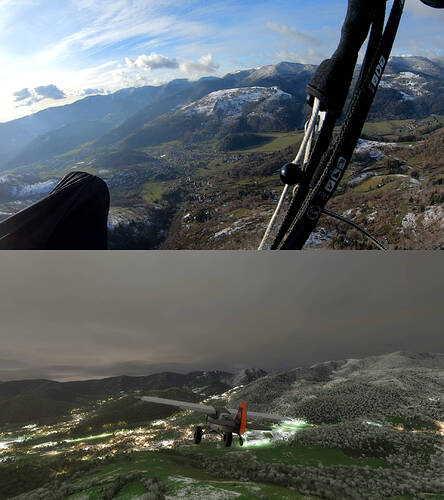 There is loads of snow in real life where I have been checking, snow appeared for a few seconds and then disappeared. Cycling between clear skies and live weather has no effect. Its not essential, and in my opinion there are loads of problems far more important to solve. Its just disappointing that they waste their time on less important eye-candy all the time (snow, night lighting) and it never works… Time well spend once again. In the meanwhile the flight model is still a joke, flight director lateral bars are not working on any aircraft with autopilot off and so on… I literally haven’t seen anything fixed properly since release other than visual stuff…

Had snow here on xmas-eve and xmas most of the time it was reflected in game, now weather is clear and snow pack has disappeared. WoW guess the sun is burning extra hot these days…BTW we had between 5"-1.3’ on the ground.

Its just disappointing that they waste their time on less important eye-candy all the time (snow, night lighting) and it never works…

I understand your point but I don’t think the people working on the 3D shaders for our VFR enjoyment are the same as the ones trying to sort out all the sim engine issue.

Update on snow: the same as yesterday morning, live weather matches live observation but the snow layer has been removed from my mountain range. If it is the same pattern as yesterday it will appear in the afternoon.

The snow worked really well for me today, really livens up the place. I like how it covers fields first while leaving rougher terrain untouched. Looks very good in rural areas.

Update for the French Vosges, German Black Forest, French-Swiss Jura area (Northwest of the Alps): the sim showed very little snow yesterday evening (much less than what I can observe IRL or on webcams).
This morning once again the snow is gone. The mountains have not been visible from weather satellite for three days now due to cloud cover of storm Bella, I wonder if this explain the lack of snow of the model in this aera.
Tomorrow afternoon, the white slopes should be visible from satellite, we will see if it changes something.
In the mean time, live weather is showing accurate ceiling, winds and temperatures.

It’s very interesting how this data is being used but when it works it looks great. According to the Meteoblue snowfall map southern Norway had a lot of snow in the past days. Yesterday I decided to go to Notodden airport where Metar said +5 C, overcast and moderate rain. Sure enough it was raining cats and dogs but the airport was still covered in snow. Wow, The atmosfere was almost real. Puddles of water forming on the tarmac which still had traces of snow. A wet runway glistering in the low nordic light while the surrounding grass and trees still being covered with heavy snow. One could almost feel the taw.

Are we supposed to see snow in Europe and northern Europe at this time? Just flew from Iceland and saw regular ground. No white snowy textrues. Used live weather. What have I done wrong? Wasn’t it supposed to be after the last update?

Norway has quite a lot of snow now and the sim mathes real life very good when it comes to snow cover. At least from what I have seen flying around in southern Norway the last days.

Also in North Italy now the snow is like reality: 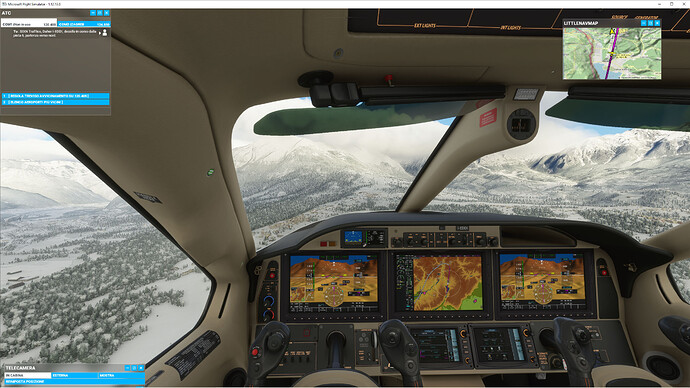 Which places in north italy did you fly at?

@KindTortoise480 for this picture I took the flightplan You’ll found here:

[Dolomites Splash1] Welcome to the 5th Gunpilot’s Challenging Flights adventure flight series. This challenging flights event is located in the Italian Dolomites Mountains and is again guaranteed to give you more of the heart pounding and sweaty palms experience that you have come to expect from Gunpilot’s flight events. In this action packed flight, that is bound to see plenty of hilarious spills and thrills, we take off on a very short airstrip surrounded by vineyards and tour thru the sce…

I live in Sicily but before I stay in north Italy East and I know very well the places where I flown as real light planes pilot. There is Levico and Caldonazzo Lakes in Trentino during the linked flightplan.
Bye!
dolomiti challenge 005|690x388

A few words to say that ice on lakes is also very important since bush planes can land on it, which is a comon activity here in Quebec.
After a few tests for our province, I can confirm that snow cover and ice on lakes is starting probably 500-600 km north from where it is IRL.

Correction: snow and ice starts up north around CYMT Chibougamau, Quebec and is present in New-York from the previous comments in even south if we look at Meteoblue. There is a 1000 km between Chibougamau and NY…
However, BRAVO to the snow and ice effect Asobo, I like very much the rendering.

I’ve been expecting snow in my flights yesterday and NOTHING worked. It was snowing at places I was flying to. There should have been remnants of snowstorms on the ground in places I also flew to as well.

NOTHING worked, and this was also the same problem last time. The snow in the sim doesn’t mirror what’s on the Meteoblue map (if that’s what they use), and I’m a little disappointed about all of this.

I even flew into snow on approach, in conditions that should have been 1/4 mile visibility- but I could see right through the clouds and haze for miles.

On top of that, there was NO SNOW ON THE GROUND as it was snowing.

So, I’m really not happy this weekend. I hope they get this sorted out and snow is really represented where it should be.

ORD, NYC, MN, TX, PA- all in the US. There was no snow anywhere I expected it to show up.

I don’t get any snow where there should be snow in real life, so far I still haven’t seen any snow where it should be. When I select live weather I see the ground covered with snow for a few seconds and then it disappears… Again a disappointing Asobo creation…

I’ve been doing some flying over the past couple of days in areas that should have snow on the ground, but I see none. Once again. My experience wtih this is that about 8/10 times in the US, where there should be snow- where there really IS snow, is as green as a summer afternoon.

There were also a couple of places that should have been in snowstorms, but had rain instead. Other places had thunderstorms AND snow, but no snow on the ground or roads.

Another issue is that I don’t see snow on grass at airports even if there’s snow that covers the surrounding area. Then, there are times when I fly into airports that are covered in snow, including runways and taxiways, which shouldn’t be the case most of the time.

There’s no consistency to this whatsoever, and it’s really annoying. I even look at the Meteoblue map and MSFS doesn’t depict snow in a lot of areas. A LOT. Especially in the US.

What determines snow? Temperature? Reported Depth? Something is wrong with this system they have at the present time.

I don’t know whether it’s accurate but this was Nur-Sultan, Kazakhstan today 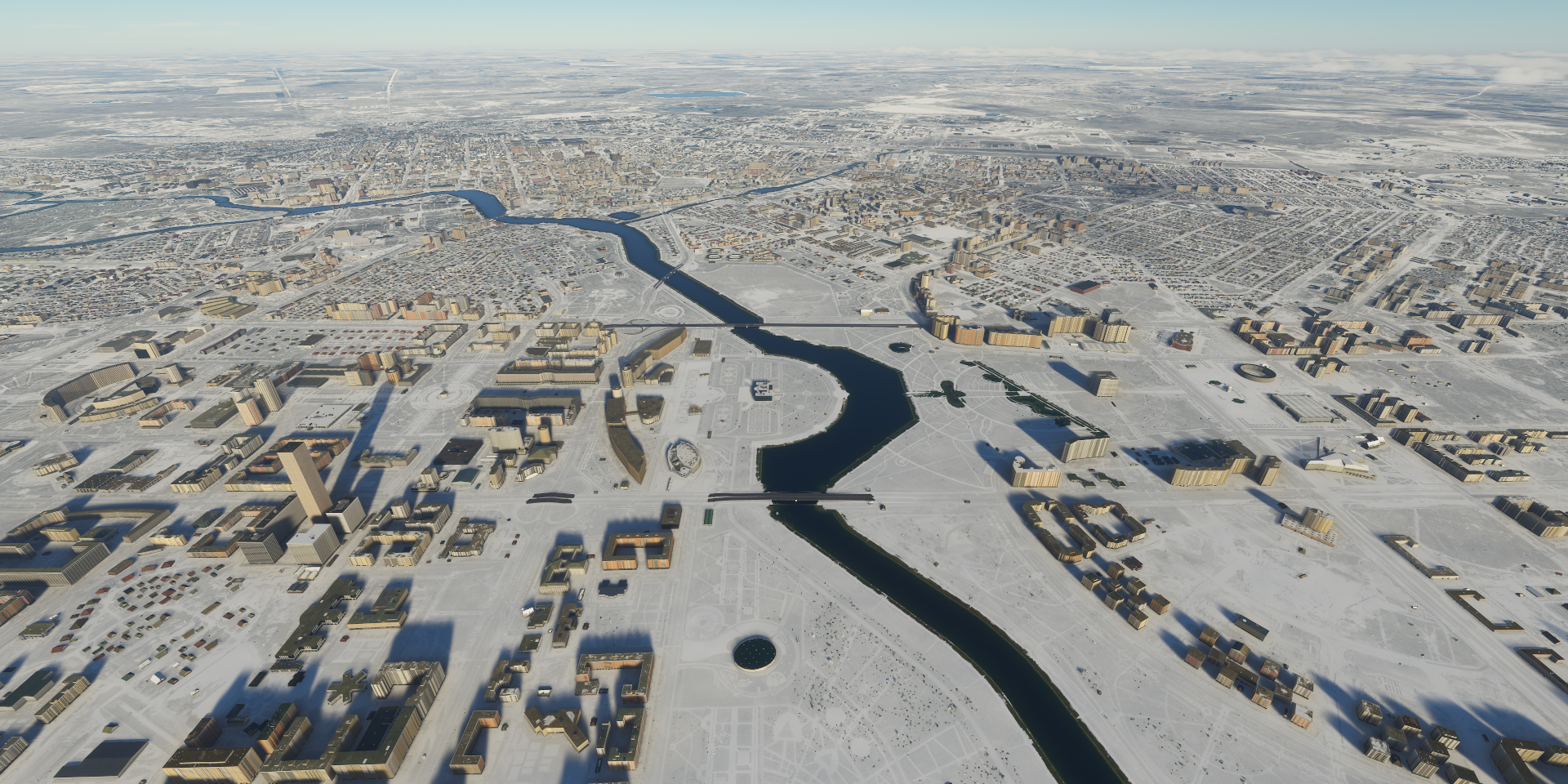 Maybe it has to do with the temperature since it was 22F on the ground. I haven’t seen any frozen lakes or rivers though. Are they not supposed to freeze? Even all the way up at Murmansk, all water is just water.

I just checked, lots of shallow lakes, there is some snow on the ground, -32F outside, normal water, no ice. I guess it’s not all the way implemented yet.