Some Terrain Tiles change up close

On SU6 now, experiencing something I’ve never had before;
It doesn’t happen everywhere, but around some areas of B.C so far I’ve noticed terrain tiling in very obviously and unpleasantly. It’s in a circle around my aircraft, and it looks something like this: 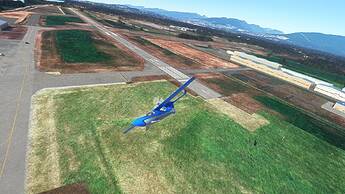 As a little extra aside; It’s almost as if, at such a close range, it’s changing to the lower zoom level, as the color and outdated/muddy satellite data strongly resembles what it looks like on the world map when I’m zoomed out a bit.

Any solution to this?

This happens to me after the Austràlia update

this “bug” exsists since, well i don’t know anymore

… it’s when there are different LOD data sets for the same ground texture and there is nothing you can do about it.

sadly this exsisted since SU5, now only the location changed. That’s for example where it was before, now this texture bug is to be found just north above that location. The texture advancement that came with the scandinavia Updater vanished with WU6 [image] [FS2020 texture bug]