They have seemed to fix the mouse interaction with the FBW EFB but now when ever I look at the overhead panel I have two mouse pointers. The left eye seems to be the correct one of the two. And NO, I haven’t started drinking…YET!

Yeah the same. I just wish Asobo would stop updating the sim. Every update they break stuff and fix stuff nobody cares for

Same here. SU8 + FBW, but I only have the problem if displaying an individual instrument panel. No problem with normal cockpit view.
Makes programming the MCDU a real pain in the a*** now…

Yup. Confirmed on many aircraft. Fine in cockpit view even in VR right click zoom. Only goes bad in instruments view. Bug reported.

I too have the double vision cursor in VR. I mainly fly the FBW A320 but the same thing happens with default aircraft.
While in the main menu in VR the cursor is normal, it’s only when in the cockpit.

Just close one eye! Seriously, I did notice that on the CRJ Captains tablet that I was able to see the mouse point without double vision which was the case for previous versions. That was great as I could navigate the table without having to close one eye. I’m just check the FBW320 to see if this has created another issue. I also notices that the perspective and size (world view) of the scenery outside the cockpit window, noticeable with the runway view, looked a lot different to earlier versions. I think it looked better with this latest version. It could be a case of improving in certain areas but creating an issue in others …

I’ve reported this issue (again) yesterday. We can vote here:

Microsoft Store version, no Developer Mode The cursor position is incorrect for the right eye. The regression was reported during BETA tests, but was not corrected before the official release. The bug is potentially dangerous for our health (eyes), as it results in us trying to focus on the cursor even though it is not possible to do so! [image]

This was happening before SU8, I did a reinstall in the end and it fixed my problem

I tried reinstalling as well as many other things. The problem persists.

@TONYDARKZERO, could you maybe post here a screenshot of how your cursor looks over the gauges in VR? Please move your head close to the gauges first. Thank you!

Same double mouse vision issue in VR cockpit for me after SU8 update.
Even after the small 3/2/22 update the issue remains.

02/03/2022 Got a small update today when starting MSFS and mouse issue is gone. It works now without double vision.

It works now without double vision.

Thanks for your feedback. This little update did not fix the issue on my end. Could you maybe post here a screenshot of how your cursor looks over the gauges in VR? Please move your head close to the gauges first. Thank you!

Unfortunately I still have the double cursor issue after the latest fix.

After the update this issue has been resolved for me. I also turned off the Home Cockpit Option, which I had on from an earlier VR Menu Issue.

Could you please post here a screenshot of how the cursor looks over the gauges in VR on your end? Thanks!

Here is my screenshot. 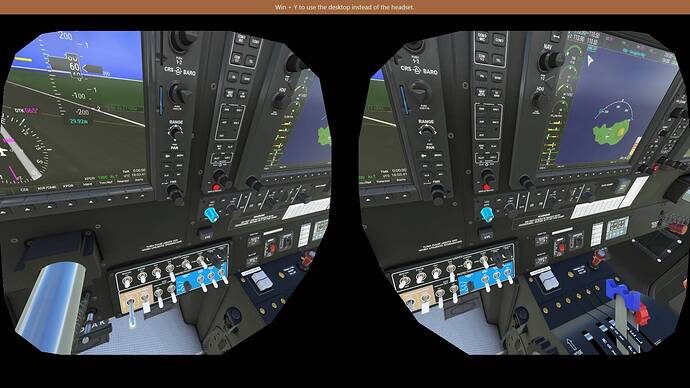 Thanks again! You gave me a bit of hope that it can be fixed on our side. Unfortunately I still cannot get rid of this issue

What plane is it by the way?

I just wish Asobo would stop updating the sim. Every update they break stuff and fix stuff nobody cares for

Make a new wishlist item that suggests the ability to disable and/or pause/delay updates and I’ll vote for it. (If a topic doesn’t already exist of course.)

FBW A320. Hope you find a solution soon.