The 40th Anniversary Edition is a milestone to the dedication and love that Asobo have put into the game, I wanted to say thank you!

a310 will be full fidelity.

I wouldn’t hold your breath for the other planes. You’ll be able to start it and get it in the air. I can tell you that much

This is so very true and I also want to say a huge thank you to the extrodinary team work that happened over one of the most trying times of a global pandemic and to still have the amazing results we are all enjoying with the flight sim.

The other aircraft will be more shallow when it comes to systems, anyway experienced third party designers create them so they might fly and handle reasonable enough

The DHC-2 is created by Blackbird Simulation (aka MilViz), the Bell 407 is created by Nemeth Designs, the Grumman Goose and Curtiss Jenny are both created by iniBuilds like the A310 is and the DC-3 is made by Aeroplane Heaven to name just a few.

Nice to have a positive topic, SU11 will be really good update but would temper expectations a bit as we don’t know just how ‘complete’ all the extra content will be!

For example, and I do hope to be wrong, but I think the A310 will have some issues or features not quite complete / up to ‘study level’ but I do expect inibuilds to speed-tape the issues in subsequent updates.

But without a doubt, releasing such an update for free, gratis, nada is unbelievable and we should not lose sight of the fact that updates are going on and on and on, bit by bit improving (well… somethings are taking longer than others, ahem) But let’s enjoy the flying eveyone!

Does anyone happen to know the file size of this update? Since I’m sigh still playing on XCloud, I’m limited to only 50 gb of space for addons/WUs etc. Not complaining - I’m flying almost for free after all - but I’d love to not have to delete/uninstall a sizable portion of my addons just to install it.

Mentioned in this week’s dev update -

The size of the update will be about 22 GiB (for Premium Deluxe) and users will require 40 GiB of free space.

[image] Screenshot by Parorng (Forum) Tomorrow we will be releasing the free 40th Anniversary Edition update to Microsoft Flight Simulator. This is the biggest update to MSFS since its initial release in 2020, and it has been a huge labor of love and source of pride for the development team. To our millions of loyal fans and sim pilots, from those who have been with us since the start with MSFS 1.0 way back in 1982, to those who embarked on their first simulated flight with the latest versio…

What type of improvements should Xbox simmers be expecting with SU11?

Oof, wow, not at all sure how I missed that. But thank you for the quick response!

But yeah, that’s unfortunate. Oh well, guess I’m gonna have to play more than a few rounds of Sophie’s Choice with a lot of my larger addons, though its a good thing a good portion don’t work all that well anyway.

It will be early to bed tonight since the 40th Anniversary update will go live at 6:00 a.m. here in Hawaii. I have so looked forward to this and my first new aircraft flight will have to be the DC-3, the most anticipated new aircraft for me. Next will be the Beaver. I am so excited!! Thank you so much MS/Asobo!

Are we able to login and play at this time before the udate? It seems I cannot run the game.

Just wow… Almost brings me to tears… the level of dedication and love you guys have for aviation and aviation lovers!

I remember playing flight simulator for the first time in the early 90s on an Apple Macintosh II and have followed it ever since.

Took a hiatus for many years and got the SX just to experience the 2020 version.

A forum can be a tough place, because often people show up when they have issues, but if things are working they’re playing MSFS instead of hanging out here. (Except us airplane and scenery addicts, who are here absorbing every pixel of upcoming news.) But if you’d shown us MSFS 40th back in 2019 when the sim was top-secret and we thought we’d be stuck on the old engine for eternity… Wow. There’s just so much potential to explore.

And there should be angel wings for volunteer mods. I’ve snarked a couple of times about excessive mod policies (regarding particular features that aircraft purchased by military organizations can have that are not to be discussed here), but I know y’all don’t set those rules, and I respect how hard and often thankless the gig is. This is the second most civil forum I hang out on (as long as you aren’t an airplane texture; if you are, you might feel nitpicked to death), and that’s in large part to the awesome moderation here.

So here’s to the journey towards the 48th Anniversary Edition! (And hopefully it’ll still be making enough money then as we’re saving up for our 7090 cards that Jorg’s 10-year-plan will continue.)

Wow, will that be the only aircraft that is study level, exept for 3rd party addons?

Not that much besides screenshots - basically all information available can be found on their Facebook page if you scroll through their screenshots:

other than that there is a sound sample on YouTube: 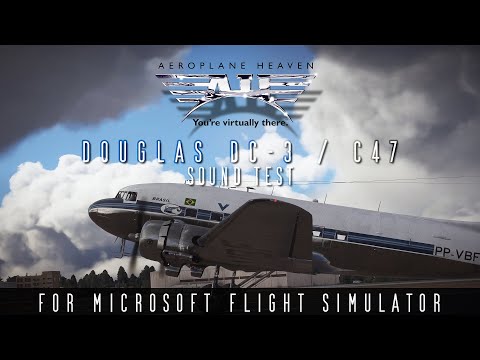 One thing to keep in mind: Likely not everything they showed will be part of the release today like different variants or liveries. I think they only release a pack with the civilian DC-3 for free with some generic liveries. More variants may follow as payware just as with the A310

To be fair even though it won’t be study level Milviz puts a lot of effort into his planes.

Happy Birthday Microsoft Flight Simulator and thankyou for the amazing adventure to Microsoft, Asobo and all staff of the forum