I’d have thought that any reasonable person asking for “live weather” could expect to be told to look out the window. It is simply impossible to reproduce something you don’t have the data on, and any simulation, for entertainment purposes or otherwise, is of necessity restricted to what is practical, and to what is economically viable. ‘Live weather’ is a marketing term, but so is ‘flight simulator’.

Totally agree… week later here. But so my system got pushed 1.8.3 tonight. Oh check that - live winds worked PERFECTLY. Among many other fixes. It’s not complete - but then nothing ever is. Even my Linux box has to be updated every few weeks anymore.

Anyone notice that after their first flight their second flight still has the 225°/3KT issue? I guess the current workaround is to restart the sim after your first flight…

That has always been the workaround since day 1.

I can’t believe they said they fixed it when the bug is exactly the same since day 1 and is immediately apparent when tested after the patch. Did they just load up a flight, see the live weather working, and close the bug?

The live weather has always worked on the first flight. And it has never worked on any flight after that.

I mean, what the hell?

I thought it only worked correctly in Europe? My flights in the US never worked. After the patch they do, at least for the first flight. They must’ve not known about the second flight bug…hopefully it doesn’t take too much to fix that!

They must’ve not known about the second flight bug

They know about it

As summer winds down for many of us, it’s been another busy week for the team. Patch #2 – Final testing on Patch #2 is almost complete and pending any last minute blocking issues, we expect to release…

Live Weather Error – “After I quit the flight and go back to World Map the live weather does not work anymore. Weather appears to be clear in whatever airport I start again.”

Live weather itself appears to be fixed worldwide, however you’ll still need to close and re-open the sim between flights it would seem.

Live weather itself appears to be fixed worldwide, however you’ll still need to close and re-open the sim between flights it would seem.

If you don’t, what do you actually see? I conducted 6 flights last night, one after the other, and didn’t notice the 225@3 thing again.

Before this patch though, on the second load, there would be no live weather at all, no wind or cloud etc.

I haven’t had the patience to do a second flight without shutting down the sim lately so I don’t remember what the result was. Did you get clouds etc. on the subsequent flights?

Not for me, mine stayed live

Yes, I did. What I did was enabled win on the map, then just hopped around a few places in the US looking fo high wind. I did a few flights there, the hopped over to Paderborn to practise my patterns again. All had wind that was variable depending on altitude.

One place had a 40kt headwind in approach, at maybe 1200ft, which dropped to a 12kt headwind at ground level.

What I haven’t been doing is comparing the sim values to real world METAR files/reports, so although I have weather, it may be innacurate.

I’ll be honest, for my purposes, as long as I actually get variable weather, I don’t care too much if it doesn’t match the real world conditions exactly. I just wanted variable weather, and that at least seems to be working now, even in the US.

I did check one website, which showed the current weather, as well as several hours back. I’ll try and find that site again, and do some actual comparisons in different parts of the world.

I have just loaded into Kastrup, and then quit to mian menu and started a new flight at Tacoma narrows and barometer was 29.92 winds 3 @ 225

I get live wind and weather on first load, but when returning to the menu and then loading in at a different airport I get 225/3.

It’s a real shame for me as it’s a huge immersion killer. That said, loading in and out of the sim between flights isn’t the worst work around, it’s just a shame that this doesn’t appear to have been tested rigorously despite being quite a fundamental problem.

My winds work perfectly in America now, I have tested several airports and all is fine in my PC

Winds do work now (at least on the first load), however they wont match METARs entirely since this sim doesn’t do weather like that. It uses a worldwide model to depict the weather, so you can expect some variation to the real world METARs

I can’t fly right now, as I am supposed to be working, but my curiousity got the better of me, and just wanted to check something.

Just firing up the world map, and looking at EGUN, the map reports 74@15, and the same for the nearby EGUL. 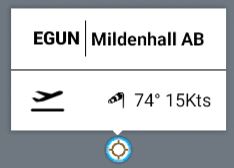 Looking at the Meteoblue site, I see the following.

So the question becomes, if MS went into partnership with Meteoblue, what was the point. If they themselves are reporting accurate weather, and I have to assume that their websites METAR reports are, why are they using a different method to represent this in the sim? What is even the point of that?

Why use a predictive model to work out what the weather might be like if you have access to a METAR report that straight up tells you what it was like an hour ago?

I did check a few other places, and although I never saw the 225@3 on the map screen, it also wildly differed from what Meteoblue themselves were reporting.

What I would be interested to see is a way of overriding simulated weather based on real world, or custom weather via the GUI, and just point it at a downloaded METAR file, just like you can do in X-Plane.

That would give us a better idea of the “interpretation” of METAR data. Perhaps there is a problem there, and not with the data itself…

They actually claim in the patch notes they fixed that one. Guess that bug is more complicated than they thought. Or they broke it again with other bug fixes and didn’t retest.

I still don’t see the weather in the sim affecting my flight at all.

The random crazy gusts are gone, but i can still fly right into thunderstorms with zero effect.

reports may as well be coming from Mars!

That’s about the size of it. My own observations:

Perhaps in the end we’ll still have to divert to 3rd party on this. REX was spamming me with something new. Maybe just bite the bullet and see if that works consistently. On the other hand, if it’s depending too much on the sim code, that stuff might also fall through.

The problem appears to be that sometimes the server at Microsoft provides the MeteoBlue worldwide weather model that is many hours out-of-date. I assume that MeteoBlue sends the entire model to Microsoft as soon as it is generated, and MS in turn is responsible for streaming it to end users.

A couple of days ago, when starting the sim mid-morning local time, the entire weather depiction on the world map was almost exactly 24 hours old. I could tell that was the case because a low pressure system with a trailing cold front was shown over the eastern Great Lakes, just starting to affect New York State (where I live). In real time, that storm had already passed through and was off shore of the Atlantic coast. Hurricane Sally was shown in its position from 24 hours previously, not where it was in real-time.

It acts as if the MeteoBlue model is being cached on the Azure servers, and sometimes you get a previous version, not the most recent. I’m almost certain this is a problem with Azure, not MeteoBlue.

Caching previous model runs is something that would be absolutely necessary if they ever intend to make historical weather available, but I have my doubts that will ever be implemented.

Yesterday morning by contrast, the weather depicted on the live map was perfectly synced with the current satellite cloud photo of the US.

It’s one thing to provide weather based on a forecast model, rather than real-time observations. It will never be “exact”, but can often be close. But if Azure sometimes provides the model forecast from the previous day, it makes the entire weather emulation as far from “live” as you can get.