Hey guys-
Just for giggles, I decided to just check the 3d settings I had setup in Nvidia control panel, only to discover that at some point along the line, I don’t know if it was the last update I did or 10 updates ago, the software decided to revert everything to default.

The latest, best advice I’ve seen is from @CptLucky8 in this post, but it is not all that new so I don’t know if he’s changed any recommendations. Hopefully he’ll see this and come along with any updated setting advice he may have.

The post says it’s for a 2070 Super (which is what I have), but I expect at least those settings would me somewhat universal for all Nvidia cards. But YMMV, I just figured I’d throw this out there in case there are others who haven’t even looked at them in awhile.

How was yours? Did it make any diference? A while ago I decided to leave the nvidia cpl alone as I wasn’t getting any major improvements (5900X - 3090). Curious to see what people are getting. Cheers

All good questions, without any good answers. The short answer is that I did not notice any differences whatsoever. But I was looking at it more from a CTD problem, or perhaps even some of the other graphics glitches. Despite this board being so full of people with issues, I myself do not have them. In fact, my experience is so different from those who are posting here, that sometimes I wonder if we’re even running the same software.

I get a CTD from here to there, but they’re usually because I have a habit of starting a flight (in VR), pausing it and turning off VR when I get to my cruising altitude, and then go about using the computer as though I were at work. Partially because in a way, I am, as I am trying to start a business, only going back to complete the flight hours later.

So I’m doing email, lots of web surfing with tens to dozens of tabs open, some picture and website editing, 3d design work, all the sorts of things that would make an Asobo Tech Support rep stay up late at night, drink heavily, and want to quit their job. And this is on top of the fact that even without all of that, I’m kind of used to pausing games overnight, but without doing all that work on it, just leaving it paused for 6 or 8 hours, sometimes longer, and before SU5, I found that it was a crapshoot whether or not I’d be able to finish without a crash. Now even that is more stable.

My point in posting this was simple- an attempt to help others that are not as fortunate as I am and are having problems up to their gills, thinking that with odd problems come odd solutions, like say, adjusting a 2D visual setting affecting a VR result.

As much negativity as we’ve seen the past few days, which people seem to think is somehow new but it is pretty typical of any new patches, combined with people with no patience whatsoever, and those who just seem to enjoy the “oh woe is me” mentality, sometimes it’s actually easy to forget that there are people who are suffering legit problems despite having done everything they were supposed to. Their overclocks are off, their Community folders are empty, and they’re not running any of the 26 “no-fly” apps that Asobo has published, and despite all that are for unknown and inexplicable reasons still having problems.

So I guess that was a long winded way to reach a simple conclusion- it’s a stab in the dark hoping somebody might be helped in some way by it.

After trying so many forum recommended tweaks and not seeing much difference, I decided putting my settings at nvidea recommended settings (the ones with the logo). After all who should know best, right? So far getting great results and have decided to leave it that way.

That’s not a bad way to go either. That’s one thing with stabs in the dark, you just never know which one might hit something. Of course, I can’t recommend walking around your house at night taking random stabs, potentially at people, but when doing so metaphorically speaking, I think you’re on safe ground.

Never forget, that often the best is the enemy of the good.

@CptLucky8 suggestions and settings have made a huge difference to the experience for me. I have my settings set to ultra in most cases and I always noticed especially when on the runway that the next runway center line (i.e. in front of the aircraft) was always blurry, probably awhole lot more than just the center line

Couldn’t figure it out until seeing @CptLucky8 findings about AA in the sim, so I went to NVCP (Nvidia Control Panel) and under select programs to customize I set FS2020 to restore which restores the settings, next Power Management Mode to max performance as usual, Anisotropic filtering to Application-Controlled, Texture filtering - Anisotropic sample to Off and Texture filtering - Negative LOD bias to Allow and amazingly no more blurries up ahead, beautiful crisp textures.

Negative LOD bias to Allow and amazingly no more blurries up ahead, beautiful crisp textures.

Argghh @DonSimone80 now you’ve done it. I have to go and give this a try after I said I wouldn’t touch it anymore

just trying to spread the love

are these the only settings you changed? Gonna try right now!

yep, everything else default

Well I’ll be… Using these with a terrain LOD at 200 does seem to look crispier, especially in the distance. Either that or I have serious placebo effect. But the weird part is, of these nvidia setting, the only one that was different from default is power management. Negative LOD is on by default, or does forcing it to allow vs app controlled (allow) make a difference? @CptLucky8 are you here? Does it make any sense?
@DonSimone80 thanks for this! 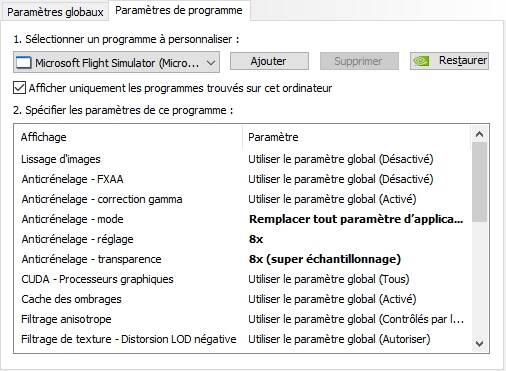 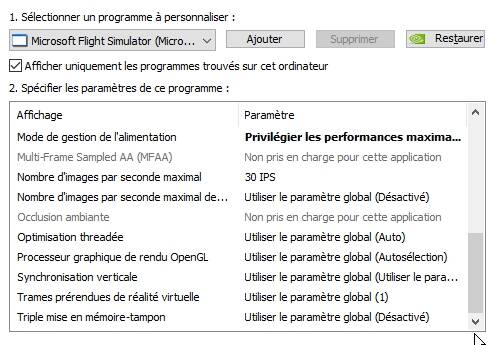 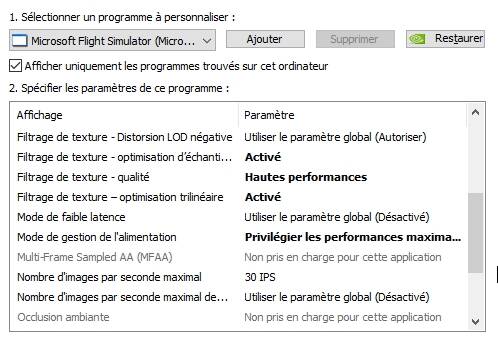 Glad it worked for you, it’s not placebo, if you have a look on the avsim forum (can’t remember the darn link), some folks posted before and after screenshots and the difference is there.

Thanks for sharing, I prefer letting the app control the AA, running these settings you’d have to disable AA in game. That said if it works for you then who am i to tell you different, happy flying

Glad it worked for you, it’s not placebo, if you have a look on the avsim forum (can’t remember the darn link), some folks posted before and after screenshots and the difference is there.

I just bumped the Terrain LOD to 4 (in the GraphicsVR section of the usercfg.opt) and it seems to really increase clarity with no significant impact on performance (I do have a 3090 however). Have you tried fiddling with this?

Do you have the steam or store version?

Do you have the steam or store version?

I have the store version. I will bump the objects to 2 too. This thread makes my day!

Now install reshade ontop and you’ll be blown away. I’ll glady send you my config file and you can toggle effects on and off. Let me know