This was a posting about the what appears to be the addition of more turbulence in SU9. that contained a lot of good points. But it got Archived when SU9 was released, which means nobody else can now continue adding to a discussion on this l issue – “Has SU9 overdone the additional turbulence”,

As a RL GA ilot, I would say, in some case, very much OVERDONE.

The suggestion of some form of Slider (yes, yet again, another slider !!), would seem to be the answer, so “Pilots” “Simmers” “Gamer” can set this to whatever level they feel they require.

Personally, I find it far too high in most recent Post SU9 release flights I have done, so much so, that it is “Totally destroying the IMMERSION” , so such an extent, that I find it hard to get motivated to start yet another Over Turbulent flight !!

Hard to say. I found that the turbulence on approach to EGMC yesterday quite bad, surprisingly so to be honest but not being a real pilot and never having flown into that airport I just dont know what is real or not. We really need to hear from real pilots to know if its overdone or not I suppose. I suspect it is OTT.

In MSFS, it may be very dependant on what plane you fly … a c172 is not going to be affected by a given amount of light turbulance, like a 737.

Flying a C172 the last few days in MSFS, it certainly seems to be overdone … but maybe it has been turned up too high, so that the 737’s can feel some effect …

Bottom line, it needs a User Adjustable slider … then everyone can be happy and move on .

The 172 is what I fly and it was bouncing around all over the place at EGMC. The terrain in that area is flat as a pancake and largely fields so no reason really for lots of turbulence. Something seems off.

100% agree … Unfortunately, agreeing may be the easy part (even for Forum members !! ),

Getting a solution may be the major uphill battle … we will see,

From my real life flying experience certainly in bad weather or around mountainous terrain in gusty conditions it can get pretty turbulent to the point of being hazardous to small ga aircraft, also on nice days when there are a lot of those fluffy little cumulus clouds around that glider pilots seek out for thermal lift, but in generally fair conditions over fairly flat or undulating terrain the turbulence in the sim now does seem to be excessive.

Flying the countryside around Pamplona and further east has been a bruising experience in the Husky. A bit too full on for my liking. It’s somewhat understanding around mountains but flatter farm type land is just as overkill. I climbed to over 5000 and not a shred of it calming down at anytime soon I felt. A 40NM flight felt like I had just flew cross country. Exhausting.

Anyone figure out a way for users to control this – (apart from flying at Night !!! )

Is it something Asobo changed in the planes, on a plane by plane basis, or deeper in the common flight model ?

I was a fueller at EGMC. Spoke to many of the pilots I got to know. Lots of turbulence coming I to southend due to being on the coast and thermals from the ground.

Another point is that in real life once you get above the clouds there is not usually much, if any, turbulence, unless you are unfortunate enough to run into a patch of what is known in the trade as CAT (Clear Air Turbulence), which the talking freight, erm… I mean pasengers, refer to as air pockets while grabbing their vomit bags

Well come fly in Kansas, it’s bumpy and like offroad driving in the sky lol… I’m a pilot It seems normal to me wether 172 or Kodiak or A320 one day PMDG 737 on Xbox

I took a flight around one of the areas I did most of my flying real-world (Warwickshire, UK - so relatively flat) and used real weather initially, then changed to some of the presets. My personal opinion is that the level of turbulence may well be correct, but feels wrong because it is very much ‘all or nothing’.

With thermals, there should be a centre with weaker rising air around it (and sinking air around that). I don’t think any of that has been built, more likely just a rising column at a predetermined rate. With turbulence in the airflow, it is like an on/off switch. There is no feel of fluidity in the air, more like a road that has potholes strewn across it.

Is it something Asobo changed in the planes, on a plane by plane basis, or deeper in the common flight model ?

Seems to be plane independent – even planes that have not changed since SU9 or SU8, now exhibit this excessive turbulence.

Not to be over dramatic, but for me , this is a Sim Killer, and I really do not want to fly like this every time I fly in the Sim.

So hopefully this will be addressed soon, either by Asobo, or some inspired Modder.

I have about 600 hours in real life flying GA aircraft, and I have flown about 5 hours in the Kodiak since the update, and I find it very realistic. Not excessive at all. I just hope that Asobo doesn’t listen to people that don’t like any turbulence, and get MSFS so it feels like “flying on rails” which was the big complaint with FSX.

So, some say it is realistic, some say excessive. Some claim to be real GA pilots, some are, some obviously arn’t , some do no claim anything , and some admit to only having Sim Experience.

So whats one to believe —/ maybe one’s own eyes — We can ALL, pilot or simmer, look at the multitude of Real World Video, of GA planes, capture on Youtube, and maybe from that, make a more reliable and statistically sound conclusion, rather than relying on memory of how one remember past real world flights.

A good comparison is how the VIDEO Image compares with the PC MSFS screen image, as opposed to how one “remembers” the turbulence “effects” in a past real world flight

One of many examples – 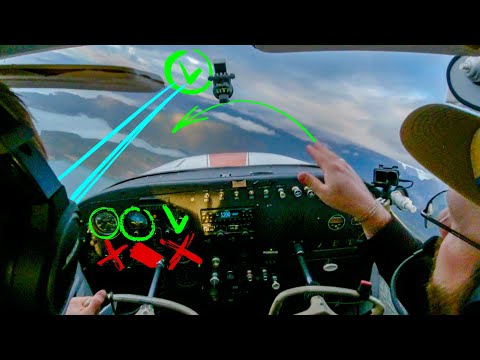 RL GLIDER pilot here (400HRS) - totally not overdone - we, glider pilots, were eagerly waiting for it

We will be really “annoyed” if it will be dumbed down. I’d say it should be even more complicated, like non laminar/highly turbulent flow between rising air in thermal and surrounding downdraft.

For now as they said in Q&A if you want calm air fly in the morning/evening or not in the summer.
Instead of artificial slider I’d say add more weather generator settings like to be able to specify air temp gradient which would control vertical airmass instability.

Yes but isnt it true that you glider pilots use hill ridges to gain altitude using thermals that these naturally channel upwards? How much turbulence would we really see at 8000 feel over flat farm land? I dont mind turbulence as long as its realistic by the way, bring it on if it reflects reality.

Hard to say. I found that the turbulence on approach to EGMC yesterday quite bad, surprisingly so to be honest but not being a real pilot and never having flown into that airport I just dont know what is real or not. We really need to hear from real pilots to know if its overdone or not I suppose. I suspect it is OTT.

In MSFS, it may be very dependant on what plane you fly … a c172 is not going to be affected by a given amount of light turbulance, like a 737.

Flying a C172 the last few days in MSFS, it certainly seems to be overdone … but maybe it has been turned up too high, so that the 737’s can feel some effect …

Bottom line, it needs a User Adjustable slider … then everyone can be happy and move on .

That’s a good idea, at least then ones that want to have a sim have a sim and the ones that just want to sit back a play can as well.

Far from off or overdone and actually has gotten closer to spot on where simulating buffeting or chop is concerned. Your wings are in wind current and even with minimal wind and/or no turbulence you’re going to notice it. I hope this doesn’t go away in a future SU because a lot of people whom have never piloted an aircraft expect things to be in a way they are not. It’s natural occurrence though, we often want to believe things to be a in a way they are not in actuality, inadvertently the belief becomes an actuality as well, much becomes convoluted this way. Similarly like the ones that complained about not being able to zoom in 30 miles out and see buildings in crisp detail after the wonderful (off-screen pre cache setting was added). Not understanding the limitations and probably never have played FS9 or FS10. Many lost their silky smooth sim after they made a patch…

Years ago, the very first thing my instructor told me when I first hopped into a Cessna 150 was to not try to stay on top of the aircraft so much and let the wings tip back forth in the current and often it will correct itself to a certain extent. Same thing applies in a 737, 767 or 787, except in larger aircraft you have more wing flex which allows one more precision control and the over-flying becomes not so much over-flying as it would a 150 or 172 but results in a rather stable flight.

Thermals don’t need hills - they are quite common on perfectly flat terrain(like where I fly in RL). Thermal height is limited mostly by inversion height - it can vary greatly. I soared at 2850m in europe on thermal, at some places you can soar as high as 5000m on thermals.