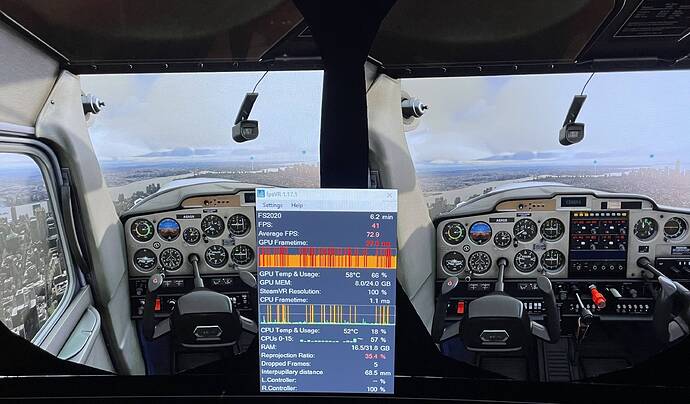 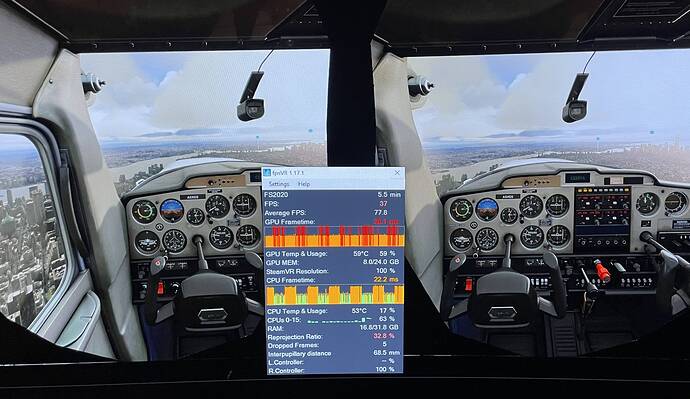 As you can see I’m getting much better final fps in 120 Hz mode compared to other refresh rates, using the exact same settings. Note how smooth the CPU and GPU frametime graphs are in 120Hz mode. Strange isn’t it. Motion smoothing is off. Vsync is off in 2D setting, fast in NVIDIA setting (really no difference between Off vs Fast in my case).

The NYC area was chosen to show extreme differences since the fluctuations are less severe in less congested areas.

Yeah, I noticed something like this. It feels as if in your 80Hz and 90hz scenarios it’s “reaching” for the target framerate of 80 or 90 but not quite getting there, resulting in missed frames/jerkiness.

Whereas in the 120Hz scenario it “knows” it’s not gonna get 120fps so it settles for half of that at 60 fps and is happy.

Maybe this theory is way off beam but I noticed something very similar albeit at much lower framerates - my setup is happy settling for 1/3 of 90Hz (30fps) but doesn’t like 80Hz where it seems like it’s trying for 1/2 (40fps) and never quite getting there consistently.

What is interresting is during the beta, with the Index, I often could get better fps making FS2020 stick to 40fps (with 80Hz Index) whereas it would lock to 30fps if I was setting the Index to 90Hz. Since a few SteamVR updates, anything other than 90Hz is causing more cpu/gpu sync problems.

Actually it shows in the SteamVR log files where FS2020 is failing sending the view nearly 10 times per seconds:

What @D4EF1n4tOR is saying is the same as what I’ve documented in “My 4K Settings” and this could be a solid lead. In effect, although my system was for example capable of pushing 55fps in 2D, when I was using FS2020 V-Sync at 30Hz, it was displaying at 27fps (not 30). It is has if the code logic in FS2020 dealing with frame syncing is late enough to miss some frames. And as a matter of fact, the frame timing I’ve captured (link above) are showing a state where FS2020 is late “presenting” the views 10 times a sec (at 90Hz). In other words it is late nearly 10% of the time, and when looking at V-Sync 30 displaying 27fps this is also 10% less…

While I like having 60 fps in this game, I would gladly sacrifice 20 fps for better image fidelity…say, a smooth/constant 40 fps in 80 Hz mode with the graphics settings cranked way up. Unfortunately, it is just not possible with the current versions of the game/SteamVR/Nvidia driver. For some reason, the game fixates on staying at 60 fps/120 Hz with my Valve Index setup as shown with minimal frametime fluctuations for both CPU and GPU, compared to other refresh rates. Hopefully, this issue can be fixed in the future updates.

Ive come to this same conclusion… I run in 120… I even start the VR in 120Hz… Never crashed out as of yet… Not sure if CaptLucky Issue with crashing at anything other than 90Hz is actually and index issue or not… Just I never crashed out at 120… And I’m getting much better stutter free at this setting.

@Malkuth1974 I admit my advise dates back from the beta and I’ve just kept it conservatively. I’m glad it is no longer crashing, however, it might still be crashing when using the older SteamVR version I was recommending lately (linux_v1.14). I didn’t try lately though.

However once in the simulator, 80, 120 (let alone 144) are always ending in unstable fps and frame sync issues (CPU/GPU), whereas 90hz seems to stick better. It might be just due to the 2070S not “capable enough” though.

This sim is just so weird… I don’t get it… Something works, than it don’t… I have made some of the newer changes that you mentioned in other threads though so maybe that helped.

Still the Cj4 is just not behaving though…

I believe something isn’t right with the current VR implementation, at least with the Index. Motion smoothing which works well in most other VR games doesn’t seem to be working correctly here. GPU and CPU timeframes are also all over the places.

There might be another root cause to the fluctuating fps in VR.

In effect, I’ve discovered what is most likely a bug where FS2020 is sucking up remaining CPU time sometimes and the cure is to either make it stop using a workaround with the mouse cursor, or if this fails, exit/enter VR a certain number of times until it cures itself.

And I’m giving some more thoughts in this post:
My 2070 SUPER VR settings and suggestion (Reverb G2 - WMR)

That “something isn’t right with the current VR implementation” is a pretty major understatement. This was exactly what I thought about X-Plane when they first released VR in their 11.2 rev. Yes, it did work and it was VR, but it felt like an experiment. Framerates were bad and stutters were constant, and it was just not something I could play seriously; so I put it on the shelf only to check it out occasionally whenever an update came along. Well, in their case it took an engine change and the better part of a year doing lots and lots of VR-specific optimization to finally get it capable of running in a state that, while still not perfect, is now close enough to the performance of a made-for VR app to play and enjoy seriously.

MSFS right now is a wild ride in VR and exhibits performance issues much like X-plane 11.2 and DCS; that is to say, it is in desperate need of heavy VR-specific optimization. While keeping constant speed/altitude under just the right conditions performance can get tantalizingly close to feeling close to a “real” VR title, any kind of maneuvering, and especially elevation changes can produce entirely unpredictable results. And yes, switching refresh frequency can absolutely make a difference, but inconsistently. Sometimes 90hz is better, sometimes 120hz is better, sometimes switching from 90hz to 120hz then back to 90hz will magically work! In any case, even when it’s “smooth” it still has enough judder to make the mind clearly aware that the world is built out of separate frames, and stutters rear their head far too regularly. Even lowering settings to levels that turn the world to mud, I can’t get the performance to a level I find worthy of declaring acceptable.

So I’m afraid MSFS is on the shelf for me right now since I only do sims in VR these days, and despite the attractive graphics, as they say, performance matters. Of course, I’ll be revisiting it regularly as updates come out, always with hope. But really, it’s much more than performance I’m missing. Now that I’m over the honeymoon of seeing the souped-up graphics, I’m increasingly missing the “feel” of flight that lower-res VR sims like X-Plane and VTOL provide; missing motion controls more and more, missing mature navigation/avionics, missing flight replay, missing the kind of plug-ins that time and a mature SDK offers (heck, even my simple Knobster apparently can’t be supported due to SDK limitations), and ultimately finding that just like big-screen/HD TV early-on revealed bad makeup and large facial pores in embarrassing ways, photorealism draws attention to scenery and photogrammetry flaws in ways that are less forgiving than when seen in sims having more representative scenery. For example, I had to laugh out loud the other day at seeing something like five mountainous terrain spikes around an airport in central MA I was flying to. It felt like I was on an alien planet. Totally and mind-blowingly immersion-breaking since I know the area.

Yes, I know this is a new sim, and I’m tempted to give MS grace regarding this; but honestly the more I use this sim the more I can’t, especially knowing the long history of great flight sims preceding it. Sheesh, FSX was very well rounded and MS “Flight”, sporting a fantabulous new graphics engine, was released (and killed) way back in 2012. So now, here we are in 2021 with yet another “brand new” sim having a great look and arguably better flight model (and don’t forget the great new marketplace store), but missing so much of what constitutes the “other half” of serious flight simming. The fact that it was released on DX11 and not even able to do DLSS, multiscreen, or solid VR belies that what MSFS really has here is a relatively staid engine attached to a Bing/Azure/AI spigot that makes it look great and finally makes it possible to stream the world (admirable things to be sure); but which is attached to a platform asymmetrically less capable than the hype had me believing. It reminds me so much of my 1996 Dodge Avenger. It was racing red and looked like it was moving when it was standing still (especially with the moonroof open), but when actually moving the engine knocked and it accelerated slower than the Ford Escor t I had just given up. Well, guess it’s back to the Ford until the new engine comes in.

Wow, I think that’s quite a strong opinion to have. Frankly I don’t think that’s a fair comparison at all.
Needless to say FSX was DX9/DX10 experimental.

Just watch the FSX trailer.
Additionally, X plane and P3D have had glacial progress on how much they have improved. Quite literally closer to a decade of gradually getting better. I mean msfs has improved very significantly in the last few months alone, and has far more transparency in its development path than Laminar of LM

Yup. I’ve been in this since FSII and have played probably thousands of games and a 25 year veteran software developer. So yes, I have strong opinions in this domain. P3D I’ve already written off as a technological mover. I have plenty of opinions about X-Plane too, but uber-hype and under-delivery is not among them. As possessor of a 40 year legacy of flight sims, I really did expect a major league blockbuster from MS that hit all the bases, not an effectively early access title, and so yeah, I’m not going to hide my disappointment. And, no, transparency doesn’t make up for that (if it did, you would’ve loved my post, hehe)

…oh, and you are correct that FSX went up to DX10 (not 11), so I removed the incorrect statement from my previous post. Thanks for pointing that out.

Having trouble with a Valve Index too, and again, sometimes it “locks in” and works, and other times it stutters like crazy, with fluid smoothness between. Its maddening. I’m not positive that 120 vs 90 is making a big difference, I’m wondering if this is just randomly “not working”.

Agreed. I just got my Index yeasterday. I can play Half-Life Alyx and other games with no issues, but MSFS 2020 is terrible. I play MSFS 2020 on my Rift S at ‘High End’ settings with great results - but it is unplayable on the Index.

You might want to read this, it might help you (or not):
My 2070 SUPER VR settings and suggestions (Index - SteamVR)