I give it a B as it has so much of what is familiar about KVNY, an airport I live near and have visited often.

Still, it’s lacking helipads one can set up in (meaning there are no parking slots that you can select in the helipad areas), though it has the markings and static helos in the right places - LAFD/LAPD and the east helo area for TV, Children’s Hospital, and whatever.

As with ORBX’ KBUR, which also lacks the real airports pads to set up in, there is a noticeble sluggishness so I have to set the sim to High. For the price and time it took, couldn’t these issues have been dealt with?

If you’re not from LA and you don’t care about helo flying, then this will be a fine addition. 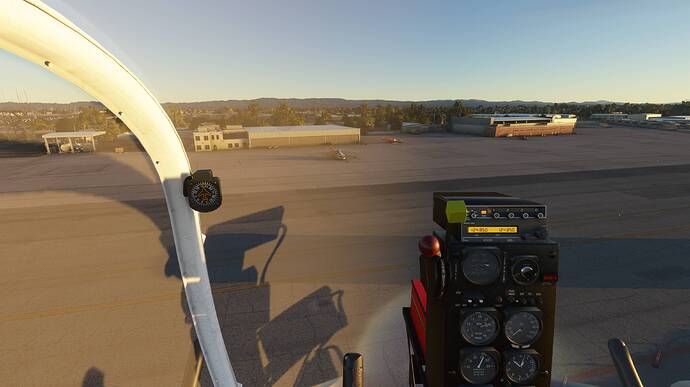 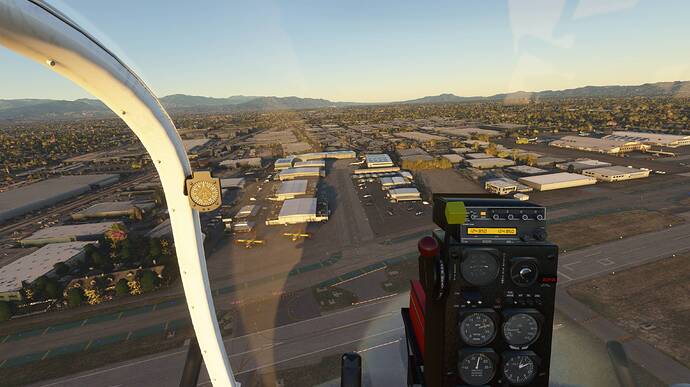 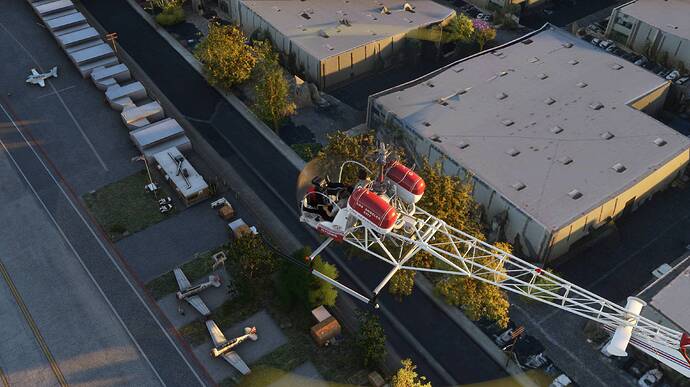 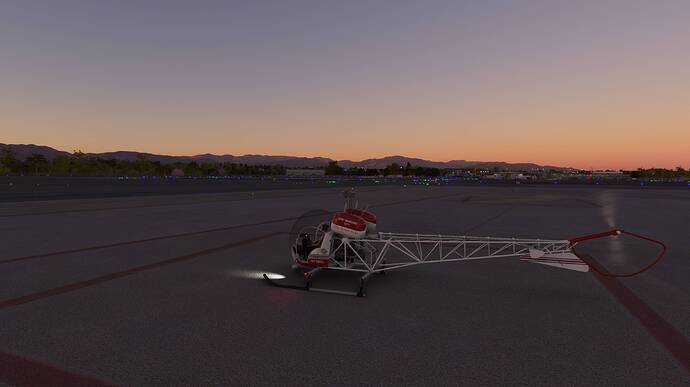 Overall I’m happy with it, I agree it brings a bit of a performance hit that maybe they’ll tune out later (I hope).

I wish the flags at condor sqdn would at least rotate to appropriate for wind, as they are, they are a bit distracting while taxiing over to 16R Flags indicating a stiff breeze out of about 270 when the wind sock is showing a light breeze out of 110ish

Anyhow, I’m basically happy with it. Gives it the correct look and feel, and really thats all I care about. I don’t need a fully modeled restaurant, as it is not relevant to my flight. So if thats where the performance hit is, it can go. Great place for lunch, but in real life it doesn’t hurt my performance (except the next day at the gym).

Doubt it’s the Aero Squadron restaurant as KBUR is also sluggish at ultra. I’m sure moving flags at airport will happen, but most go for the LCD. BTW, in a sim where the weather rarely agrees with real weather, I have learned to be patient.

At any rate, I hope some flightsim.to creator takes the lead and puts a few helipads where ORBX has only put markings.

I don’t think they promised to include every aircraft that lives at the field. Strictly speaking, the markings used on the Condors T-6’s are not controversial. Just the crosses, as you said. Still especially in Germany, that’s a touchy subject and its not difficult to get your product banned for sale in that country if it appears to be displaying any reich era stuff. Easier to leave that out. Pretend those planes were out flying the day you were simming.

I agree, I’d like to see more supported ramp spots, in general not just for Heli, but definitely missed an opportunity to get the heli spots in there.

It’s not as if Helisimmer has not advocated this directly with ORBX. Hence my disappointment.

Is Hellsimmer a big deal? Never heard of this person…

Love this Airport. Landed there this morning in the DC6 from KPHX 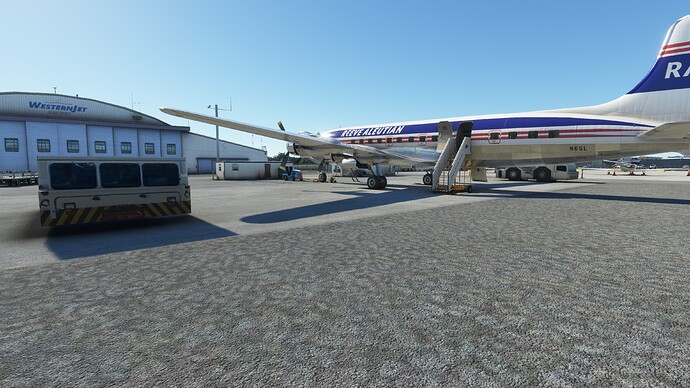 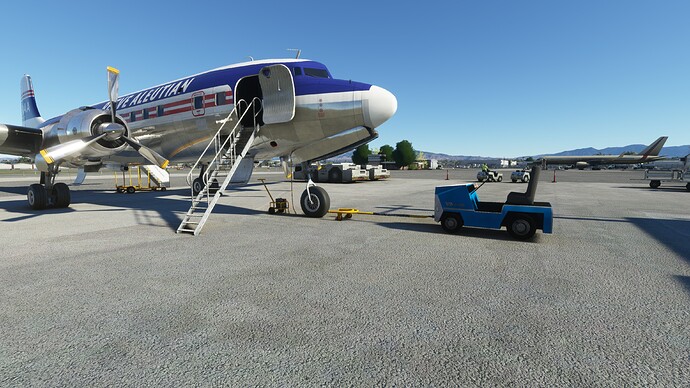 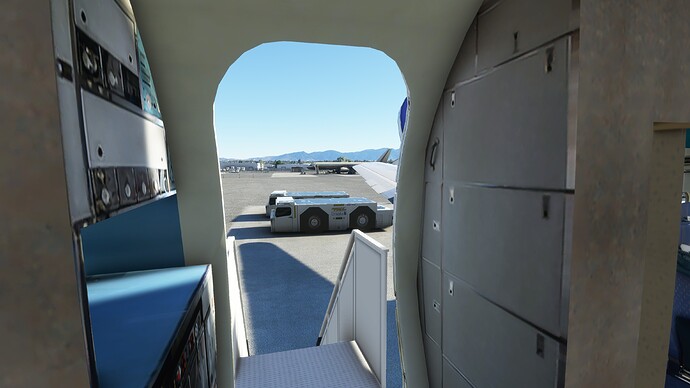 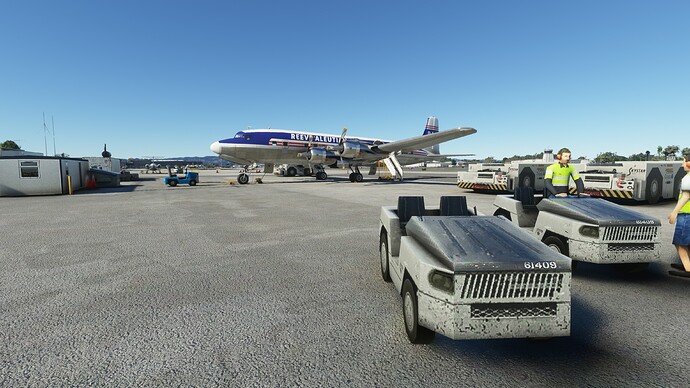 How is the performance @KVNY

I rather enjoyed adding KVNY to my list of SoCal airports.

As for the frame hits… it seems the only way to avoid them is to fly north get on the other side of the mountains.

To get the real ‘feel’ of KVNY, you need to probably up the AI traffic or go multiplayer and VATSIM or PilotEdge. Nothing like hearing , ‘N1234’ you are number 5 for 16R’.

LAX area runs well on my machine.Problem when I get near the airports like ORBX Hollywood Burbank the fps dips below 20 but I airborne away from airport the fps goes into the 30s,40s. Removed the scenery and the default version way better.

KVNY is fine at High, but can be laggy at Ultra, especially if you have KBUR as well.

Bought it today and the performance is very poor! disappointed. Its worse than Burbank.Freezes when I move the mouse around. Heading to the ORBX forums.Settings mainly on High.Hardly any on Ultra.
Seriously this will my last product from ORBX.EGLC runs really well though.
Lowered my settings and no change. Not sure why its bringing my machine to its knees!

I’ve only had FP hits at KVNY and KBUR on Ultra, but not on High. Also, I’ve not had the same issues with other ORBX software, even London scenery works well in the rain.

Yes I parked at EGLC in the rain earlier with the CRJ and had no issues. My best bet the airport needs more than 8gb of vram which my GPU only has.Wow its actually a lot worse than Burbank.

Bought it today and the performance is very poor! disappointed.

I sympathise with you. I bought EGNM from them for X-plane 11 and that tanked my system a bit too and it never improved for me. That’s why I hardly ever buy airports since I prefer a better fps and a more basic airport. On some things though ORBX are really good and give good value so I’m not knocking them. They are by and large imo a good 3rd party seller. Hope you solve your probs

Well I have learnt a valuable lesson here but definitely was not expecting such an fps hit a GA airport.

I know how you feel. I’ve been there before. It’s best though to look on the brighter side but bear it in mind for future purchases.

On the brighter side there will hopefully be performance improvements for most of us on 27 July. This time next week it might run much better. You could also adjust your settings a bit too when you’re at that Airport. So all is not lost

Funny thing is I lowered the settings and the fps shot up but when I move the camera around the fps dipped right again below 20.I am looking forward to SU5 update but I am unsure if it will fix this issue.
That being said all the other products I own from ORBX run well with the exception of Burbank just a few miles from this one.
Went to ORBX support.